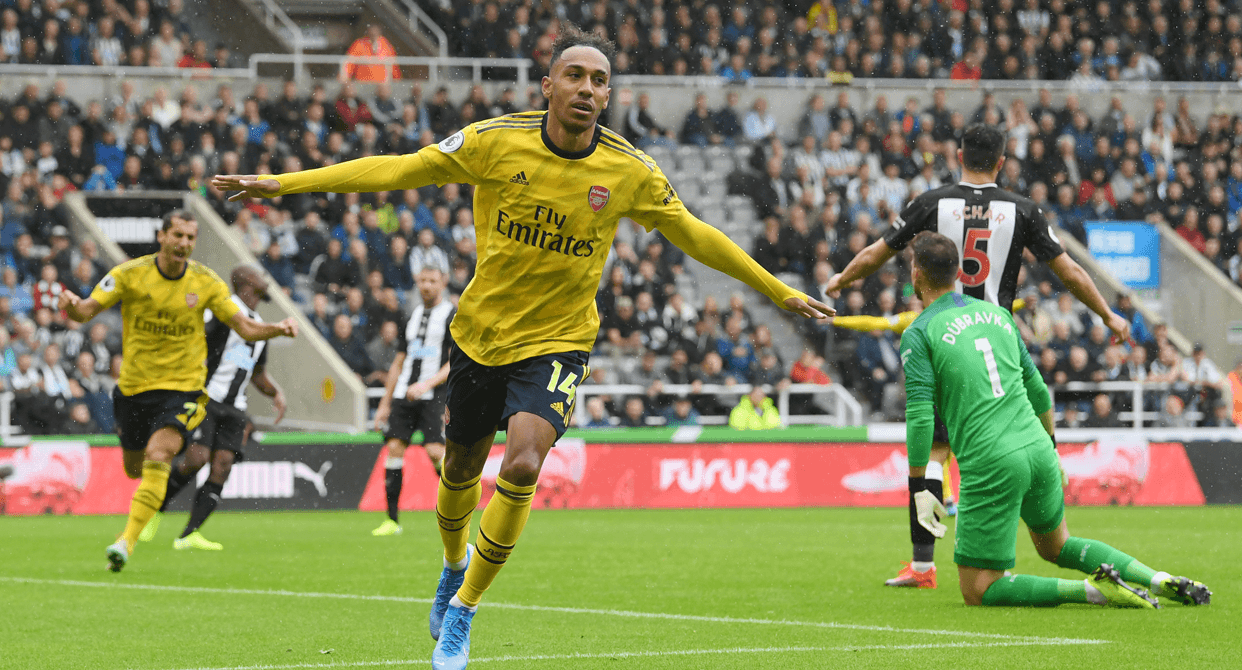 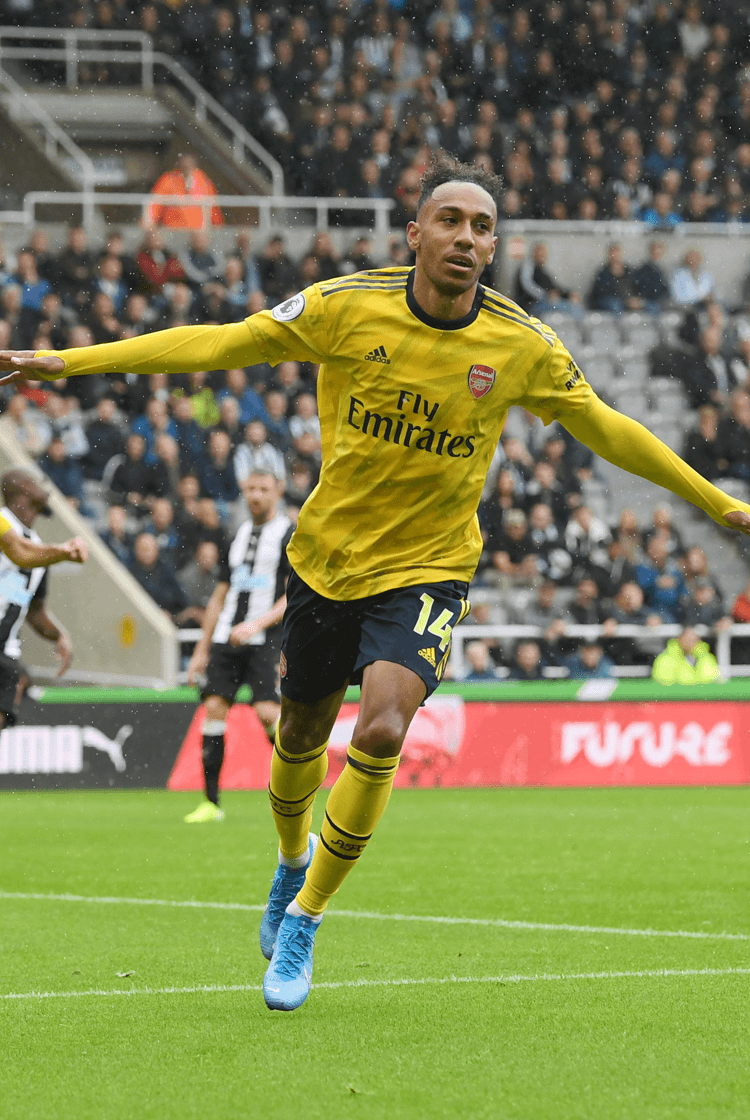 Two new dawns for two significant teams. Steve Bruce’s first competitive fixture as Newcastle manager ended in the disappointment of defeat and without a goal for new striker Joelinton; Unai Emery’s new-look Arsenal started without £72m signing Nicolas Pépé but their gamble paid off when Pierre-Emerick Aubameyang’s 58th-minute finish gave them all three points and left their hosts regretting a damaging defensive error. If Newcastle can be expected to improve when their squad adjusts to Bruce’s methods and their new signings settle, Arsenal will similarly produce more when Pépé is ready to start and Alexandre Lacazette returns. Our expert coaches assess each team’s first performance of 2019/20. 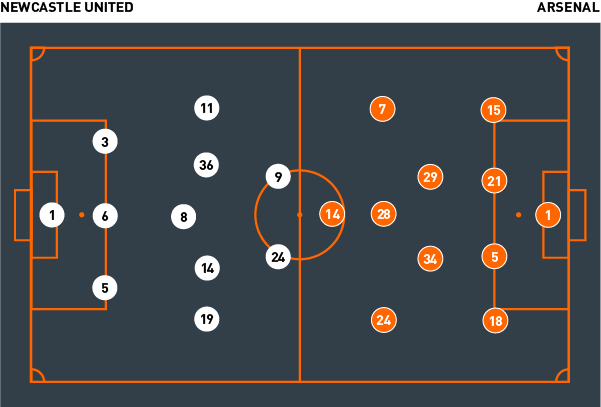 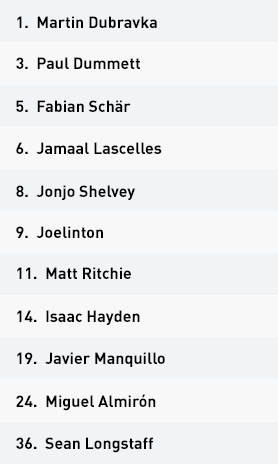 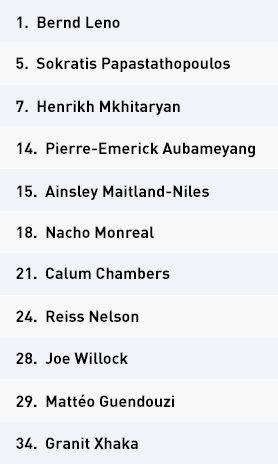 For the first competitive fixture of Steve Bruce’s reign as Newcastle United manager, he organised his team into a 3-5-2 led by new signing Joelinton alongside his predecessor as the club’s record buy, Miguel Almirón. The latter dribbled horizontally across the pitch in an attempt to tempt Arsenal’s defensive players out of position and create space, but while the compactness between Arsenal’s back four and double pivot screen remained consistent, the visitors’ wide players were drawn, creating more space for the Newcastle wing-backs – Matt Ritchie and Javier Manquillo – to deliver crosses. This also gave Joelinton sufficient time to advance, and attack behind Arsenal’s central defenders.

Without possession, Ritchie and Manquillo retreated into what became a 5-3-2; this began as a mid-block and became a lower block when Arsenal advanced and pushed their full-backs further forwards. Bruce’s three central midfielders responded by pressing wide, but the Arsenal full-backs would then combine inside into the space that had been created. Emery’s team created few chances, however, and rarely stretched the hosts’ three-strong defence, which remained organised and disciplined.

The depth of the Newcastle wing-backs meant they became ineffective during transitions, particularly when Joelinton and Almirón were blocked by Arsenal’s double pivot. Isaac Hayden and Sean Longstaff instead became their main transitional outlets by attempting to find space behind the visiting full-backs, but they rarely managed to penetrate further. Direct balls to Joelinton – supported by the two central midfield runners – still represented their greatest threat.

Arsenal’s width became harder for the hosts to contain during the second half, when the visitors built around the sides of Newcastle’s mid-block; their central midfield remained compact to block routes to Arsenal’s advanced attack, but the increasing width of Granit Xhaka and Mattéo Guendouzi from the double pivot contributed to building play around that block.

In the end, however, it was a Newcastle mistake that cost them the game. Substitute Jetro Willems waited too long to receive a pass, enabling Ainsley Maitland-Niles to intercept and play in Pierre-Emerick Aubameyang to produce a classy finish for the game’s only goal.

Bruce’s substitutions made his team more attacking, but the Magpies increasingly lacked structure, particularly in central midfield. The departures of Jonjo Shelvey and Longstaff left Ritchie and Almirón playing alongside Hayden – but this resulted in fewer options between the lines and too little support for Joelinton.

The visitors’ attack also changed during the second half; substitute Nicolas Pépé and Henrikh Mkhitaryan made regular runs in behind and forced Newcastle to retreat. The hosts thus struggled to launch counters, while the deeper positions taken up by Aubameyang improved Arsenal’s counter-press. The Gunners’ eventual reversion to a mid-block also frustrated Newcastle, who never really managed to get enough support up and around a frustrated Joelinton.

Unai Emery set Arsenal up in a 4-2-3-1 formation, with Granit Xhaka and Mattéo Guendouzi as a double pivot that was initially blocked off by the Newcastle attack. As they struggled to connect defence to attack, centre-back Calum Chambers carried possession out of defence to disrupt Newcastle’s compactness, leaving Guendouzi in a position to receive. Pierre-Emerick Aubameyang drifted from his central attacking role to offer support on the right; when Joe Willock, who started as the number 10 behind Aubameyang, moved to offer support for quick combinations or in behind for more penetrative options, Arsenal were able to breach Newcastle's block.

Henrikh Mkhitaryan’s movements inside from the right added to Willock’s central presence and created a four-on-three overload against their opposing central midfield. For all of their play into the final third, however, Arsenal struggled to create chances against a Newcastle defence that played with sufficient depth and cover to stop the Gunners penetrating into the penalty area. Full-backs Nacho Monreal and Ainsley Maitland-Niles also advanced to offer support, but Arsenal lacked the presence required around the hosts’ central defenders to score in such crowded areas. Reiss Nelson did provide an alternative option during transitions; his speed and directness brought the visitors forward, and complemented Aubameyang’s pace in the final third.

During the second half, Xhaka and Guendouzi adopted wider positions during the Arsenal build, and looked to combine with Nelson and Mkhitaryan while Aubameyang remained much higher to penetrate in behind. The positions Xhaka and Guendouzi increasingly took up created more width when in possession and more midfield combinations, including after the introduction of Dani Ceballos. That pressure contributed to them taking the lead, when Maitland-Niles intercepted a switch of play and capitalised to feed Aubameyang.

Arsenal managed to regain possession much further forward and penetrate more through central midfield in the second half. By contrast, Newcastle struggled to link defence to attack, and failed to match their opponents’ superior organisation, balance and compactness. In the end, this is what earned Arsenal their opening-weekend win.