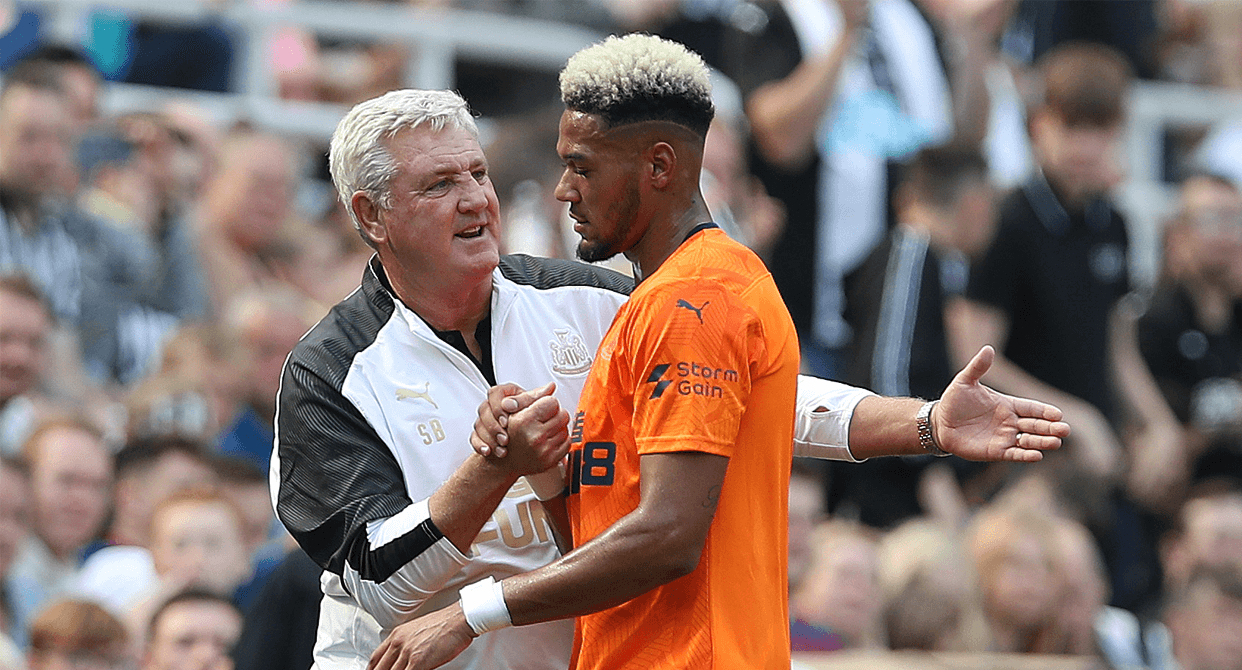 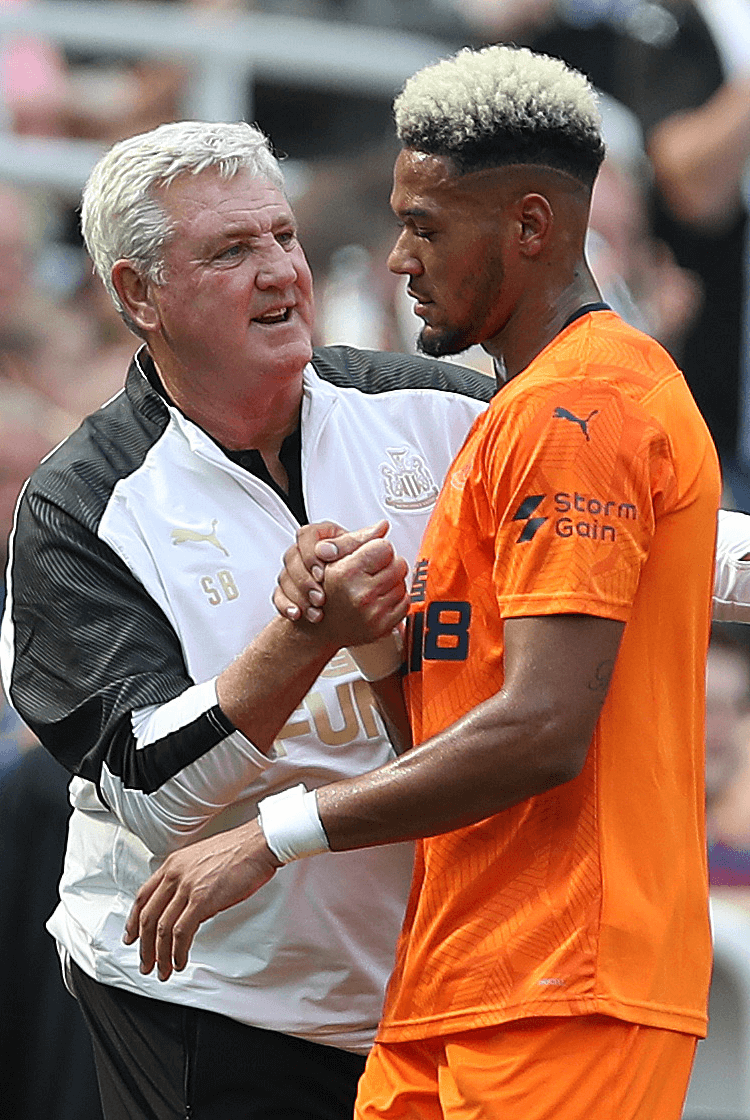 The 2019/20 Premier League season begins on Friday, when European champions Liverpool host Norwich at Anfield. As part of our season preview, The Coaches' Voice experts have predicted who can expect to finish where and the key tactical questions facing each team. Here, we cover those clubs we believe will finish between 16th and 13th, starting with a new manager in charge at St James’ Park.

16th: Newcastle United
Newcastle enter yet another season lacking stability, this time owing to the departure of Rafael Benítez. Steve Bruce (above, with new striker Joelinton) was quickly appointed as his successor, but is immediately under pressure to provide similar results to those achieved by Benitez’s impressively organised defensive block and tactical expertise.

The limited squad Bruce inherited has since been strengthened by the arrivals of Joelinton and Allan Saint-Maximin. The minimal emphasis on attack Benítez’s team often demonstrated, regularly isolating lone striker Salomón Rondón, is something Bruce can improve by providing support around the mobile, hard-working Joelinton.

In pre-season, Bruce experimented with a 3-5-2 formation, which he also used when last in the Premier League with Hull City. This system encourages the use of one close supporting attacker, greater width through wing-backs and transitional stability with three deep-rooted central midfielders. Similarly, a 3-4-3 shape – using two supportive inside forwards, Miguel Almirón and Saint-Maximin, around Joelinton – could also work. What is absolutely essential is that Bruce has a far better start than did Benítez to 2018/19, when Newcastle didn’t win any of their first 10 league fixtures.

15th: Aston Villa
Championship playoff winners Aston Villa may have made a statement by investing so heavily in their squad, but it is likely to be the midfield combination of John McGinn and Jack Grealish that determines whether or not they preserve their Premier League status.

The versatile McGinn can be used as a double pivot within a 4-2-3-1, assisting the build-up with his quality possession under pressure and allowing Grealish to operate further upfield, where his individualism and creativity is most effective. McGinn’s workrate and determination also impress, meaning Grealish doesn’t waste energy chasing back to press lost balls. Villa manager Dean Smith (below, with McGinn, Grealish and Anwar El Ghazi) can also use McGinn in a more advanced role alongside Grealish as one of two numbers 10s behind lone striker Wesley Moraes. By using the left-footed McGinn from the right, Grealish has greater freedom to horizontally move behind an opposition midfield unit and receive on the half-turn, where he so often excels.

With one of Marvelous Nakamba, Connor Hourihane or Douglas Luiz expected to be used as a defensive midfielder, Villa shouldn’t have to sacrifice defensive stability behind the ball when McGinn and Grealish are at their creative best.

14th: Southampton
After succeeding the sacked Mark Hughes, Ralph Hasenhüttl largely organised his Southampton team into a 3-5-2 system, but the arrival of Che Adams and permanent signing of Danny Ings might provoke a switch to a 3-4-3 – especially when pressing high or building into the attacking half.

Ings’ penetrative running in behind will complement Adams and Nathan Redmond by forcing central defenders into deeper territory, increasing the gap between opposition defences and midfield, where Redmond and Adams thrive. Ings’ goalscoring instincts should mean Southampton converting more of their chances, following their long-term struggles in the final third. Adams’ versatility means he can run in behind, potentially rotating with Ings while Redmond operates as a deeper 10; the latter can benefit still further by drifting into wider spaces and combining with the overlapping Ryan Bertrand.

Hasenhüttl’s squad still possesses sufficient depth to revert to a 3-5-2 if three, stable central midfielders are required to contain, rather than create, behind a front two from three of Redmond, Adams and Ings.

13th: Crystal Palace
Crystal Palace appear to have resisted interest in the influential Wilfried Zaha, but have been undermined by the departure to Manchester United of Aaron Wan-Bissaka. Gary Cahill’s arrival on a free transfer has strengthened manager Roy Hodgson’s central defensive options, but if Max Meyer – who also joined as a free agent, 12 months ago – can have a greater impact Palace may have little need to spend. That said, midfielder James McCarthy has joined from Everton and attacking midfielder Victor Camarasa has arrived on loan from Real Betis after an impressive spell at Cardiff.

With Hodgson again likely to organise his team into the 4-4-2 shape that often inspires Zaha’s finest form, Palace will also have width in midfield, potentially providing the crosses the often-isolated Christian Benteke requires and encouraging Zaha to score more consistently. Using Meyer on the left, where he can combine with the overlapping Patrick van Aanholt and use his ball-playing abilities and creativity, could also help Benteke.

In Wan-Bissaka’s absence, the right side of Palace’s team could yet become a concern. Starting Andros Townsend, who is stronger on his left foot, on the right naturally decreases width, placing an increased emphasis on the right-back to provide overlapping runs. Whoever of Martin Kelly, Joel Ward or James Tomkins gets the nod is unlikely to provide regular deliveries, so Meyer and Townsend may even be encouraged to rotate to encourage greater width on both flanks.