Profile
A forward decked in Manchester red took home the Premier League Player of the Month award for January. The accolade stayed in the city for February, but switched to the light blue of Manchester City – and to the familiar figure of Sergio Aguero.

Seven goals in just four games from the in-form striker helped City to a maximum points haul as his team worked to overhaul Liverpool at the top of the Premier League. Back-to-back hat-tricks at the Etihad, against Arsenal (below) and then Chelsea, saw Aguero equal Alan Shearer’s all-time Premier League record of 11, while helping him earn his sixth Player of the Month award. He joins Steven Gerrard and Harry Kane at the top of that particular tree, five ahead of the two other Argentinians to win the monthly prize – Carlos Tevez and Juan Sebastian Veron, in case you wondered. 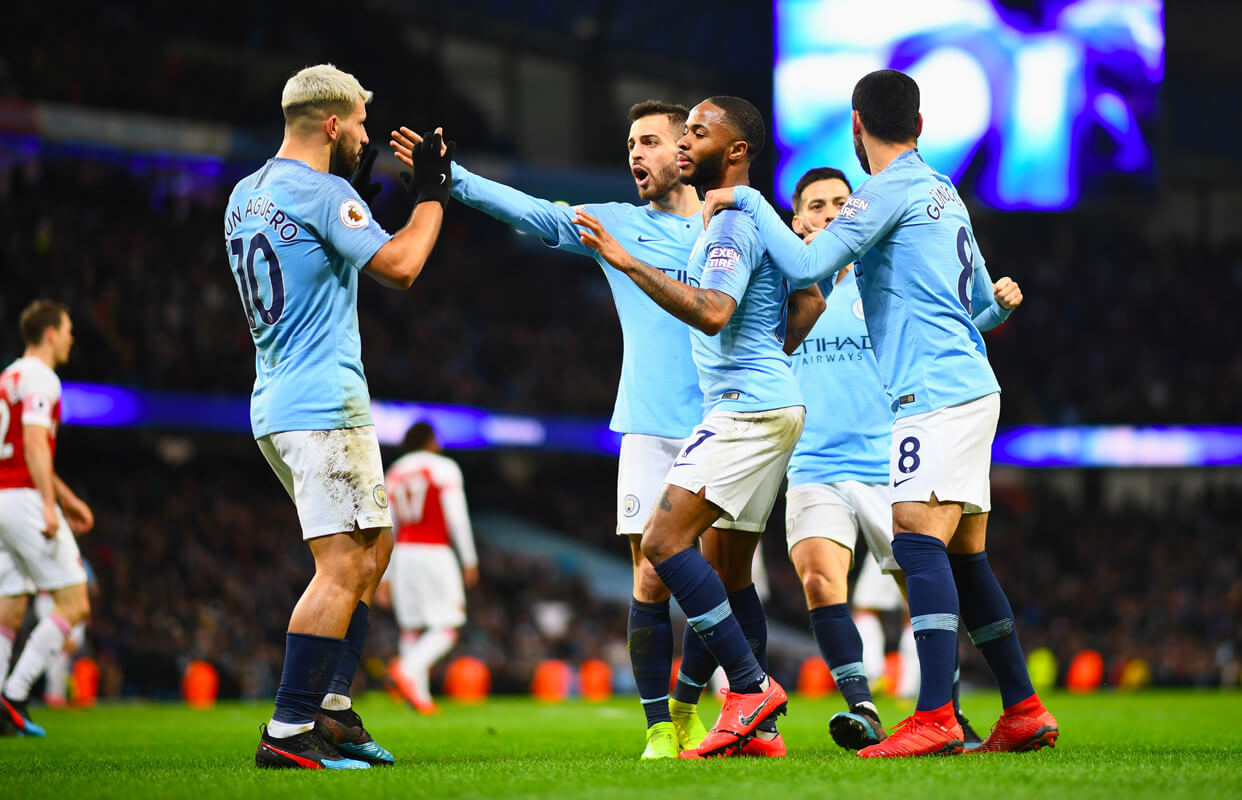 Aguero is also now back on top of the Premier League scoring charts, albeit only one ahead of Mo Salah, Harry Kane and Pierre-Emerick Aubameyang. His shooting accuracy is actually behind all three of his chief rivals for the Golden Boot, although his six efforts against the woodwork is a season high for the division so far. Not that either Aguero or his manager Pep Guardiola – who scooped the manager award for the month, not surprisingly – will care, with City now in charge of their own destiny as they look to retain their league title for the first time.

The 30-year-old’s sixth award comes at the expense of a shortlist featuring, among others, December winner Virgil van Dijk, the Dutchman’s in-form teammate Sadio Mane and the Manchester United pair of Paul Pogba and Luke Shaw.

Key strengths
Aguero’s ability to score goals in big moments is up there with the greats of the Premier League era. This season alone, he already has eight goals from games against the other teams in the top six – and City are still yet to play reverse fixtures against United and Tottenham. By way of comparison, Mo Salah has only one – and that was the fourth in Liverpool’s 5-1 rout of Arsenal in December.

That’s not to say the Argentinian saves all his goals for the big opponents. Aguero is now the eighth top-scorer in Premier League history; he will pass Jermain Defoe and Robbie Fowler before long, with Thierry Henry in fifth only 14 ahead of his current mark of 161. The Frenchman’s ratio of 0.68 goals per Premier League game is one of very few to even compare to Aguero’s remarkable current record of 0.7. Harry Kane, 36 behind the Argentine for now, boasts a similar ratio, with Alan Shearer’s record 260 goals scored at a rate of 0.59 per game.

One chief contributing factor to this fantastic conversion rate is Aguero’s ability to shoot early, around opposing defenders and even from distance – witness the first of his three goals against Chelsea last month (above). Leaving goalkeepers unsighted until the very last minute has given the forward a crucial advantage when striking the ball throughout his career.

His small touches and fakes also create the slightest of windows to shoot, where lesser players might lose possession or simply strike the ball against a defender’s block. Even as he has moved into his 30s, Aguero has not lost any explosiveness inside the penalty area. He is often the first to latch on to a loose ball and shoot, or get on to the end of low crosses. Put simply, he is a superb all-round finisher.

Tactical analysis
Head coach Pep Guardiola guided Manchester City to four February victories, all against top-half opponents. But without Aguero’s goals, it might have been a very different month for the blue half of Manchester – he scored all three in the 3-1 home win over Arsenal, and the match-winning penalty in the 1-0 victory over West Ham.

Beyond his goal return, Aguero is now a much more consistent contributor to City’s build-up play. His ability to link the play after moving into the inside channel is a regular source of creation for his team – particularly when linking with wider runners (above, against West Ham), whether wingers or full-backs, to pull opposing defenders out of shape. This fits exactly with Guardiola’s preference for his teams to lock down the inside channels when attacking.

Off the ball, Aguero’s work rate and desire to help his teammates press the ball can go unnoticed. Throughout February, he recorded 52 challenges for the ball – more than any of his attacking teammates in the City team. This can lead to extra chances, as his work ethic to force opponents into mistakes allows the likes of David Silva, Kevin De Bruyne and Bernardo Silva to enjoy more possession higher up the pitch – as below, in the 2-0 win at Everton in which Aguero didn’t score.

With Aguero sometimes then in a deeper position after pressing the ball back, his link-up play again comes into play. City always have keen runners looking to get in beyond defences, with Raheem Sterling, Leroy Sane and Gabriel Jesus all regular forward options as well as both David and Bernardo Silva. Aguero’s ability to drop deep and offer yet another creative option in the City build makes him an even more dangerous proposition. Prolific he might be, but the goals only tell half the story. 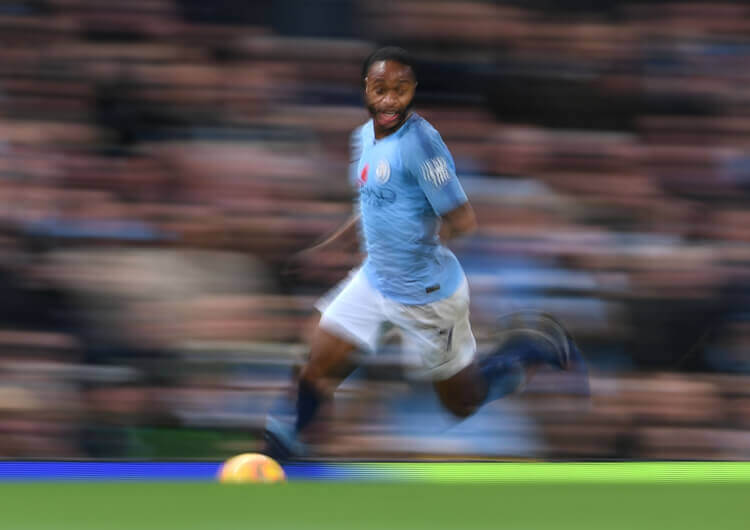 Goals against Brighton, Newcastle and Tottenham helped Manchester United forward Marcus Rashford to the Premier League Player of the Month award for January – our experts analyse what else the England forward brings to the Red Devils attack 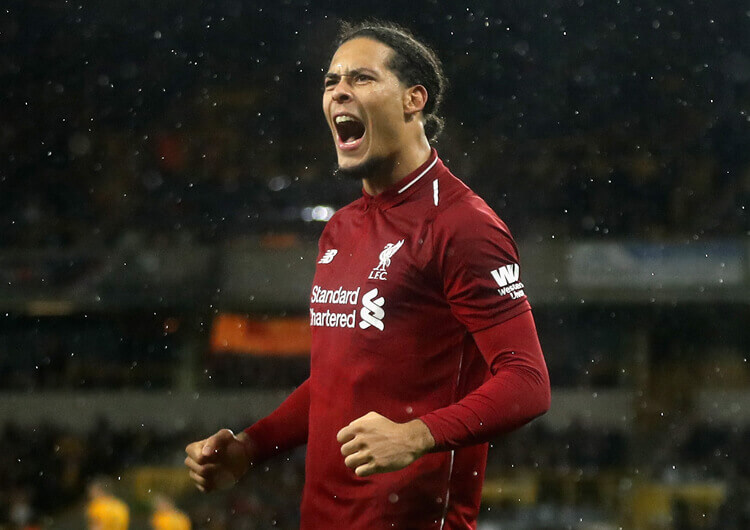 Liverpool centre-back Virgil van Dijk was named Premier League Player of the Month for December ahead of Mo Salah, Eden Hazard, Marcus Rashford and Harry Kane among others – we analyse how he beat them all to win the award for the first time