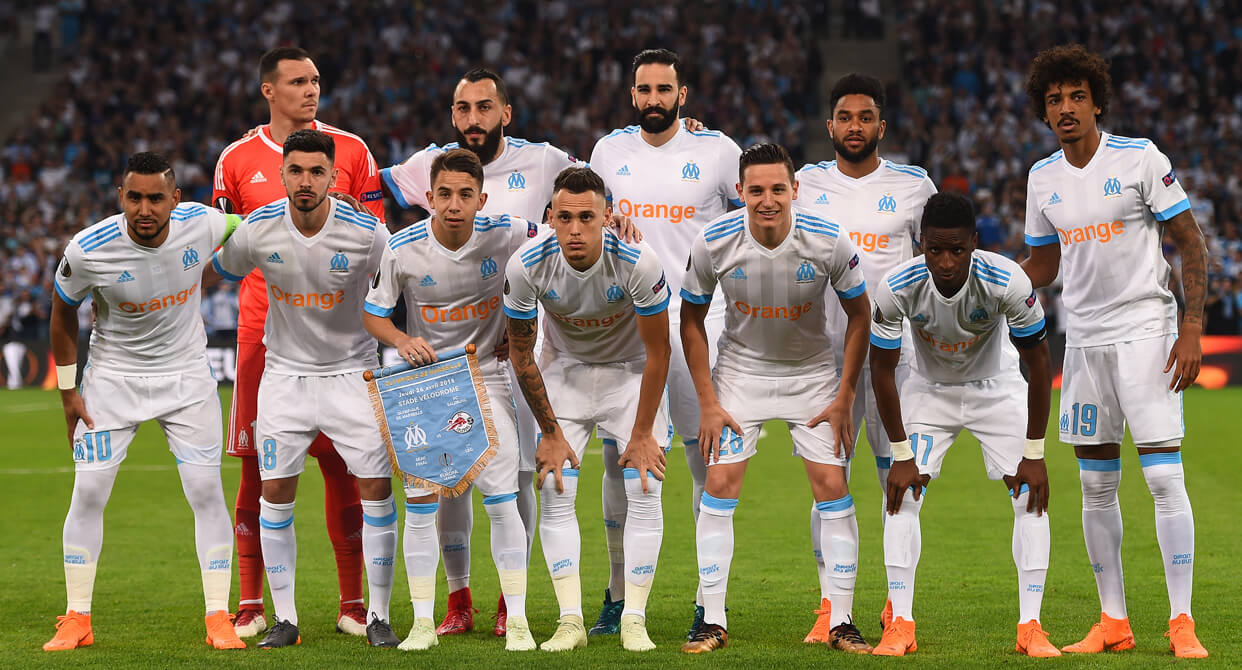 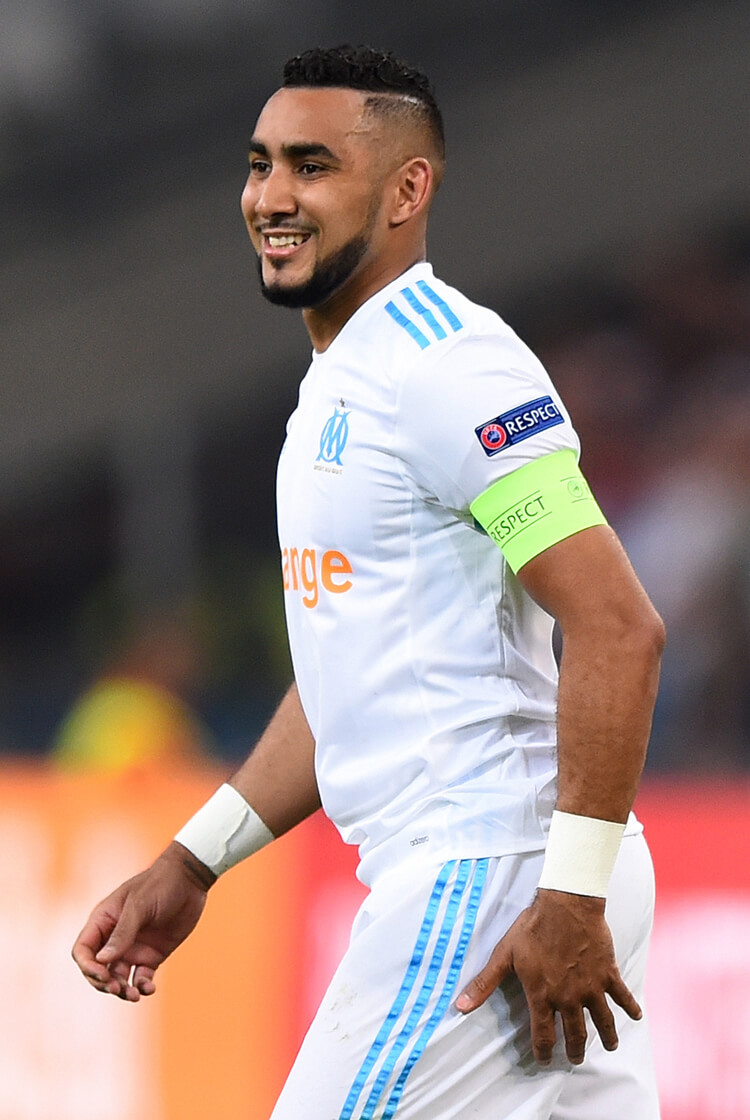 Qualifying route
After finishing fifth in Ligue 1 last season, Marseille found themselves dumped in the relatively lowly surrounds of the Europa League third qualifying round. A 4-2 aggregate win over Belgian side KV Oostende, followed by a 4-1 aggregate victory over NK Domžale of Slovenia, saw them comfortably through to the group stages.

Rudi Garcia’s charges finished only second in Group I, collecting seven of their modest total of eight points from their three home games. They failed to score in two games against group winners – and eventual semi-final opponents – Red Bull Salzburg.

Les Olympiens found their form once the knockout stages got under way, however. Impressive two-leg victories over Braga, Athletic Bilbao and RB Leipzig saw them into the aforementioned semi final (below), which they won with a Rolando goal in extra time in the second leg. They scored only four goals in six group-stage games, but have found the net 16 times in eight Europa League matches since as they head into a final against Atletico Madrid.

Athletic Bilbao 1 Marseille 2
Marseille stormed into the quarter finals with a 5-2 aggregate victory over Athletic Bilbao. A 3-1 first-leg win at home enabled them to take a two-goal advantage to Spain for the return leg.

Dimitri Payet won a penalty late in the first half, after a clever one-two with former Fulham striker Konstantinos Mitroglou fooled the Athletic defence. Payet stepped up and calmly slotted the ball home, giving his team a crucial away goal and a three-goal aggregate cushion.

After scoring twice in the first leg, Lucas Ocampos added a second on the night. The Argentine cut inside from the left and curled a superb low effort into the far corner. Despite Athletic grabbing a goal late on, Marseille progressed untroubled.

Marseille 5 RB Leipzig 2
Marseille’s inconsistent away form in Europe continued with a 1-0 defeat in the first leg of their quarter final against German side RB Leipzig, but the second leg followed a very different path – in the end.

Portuguese winger Bruma buried the first chance of the game for Leipzig after only two minutes, but Marseille stuck to their Droit au but (‘Straight to the goal’) motto and were 2-1 up on the night within 10 minutes.

Florian Thauvin gave Marseille an aggregate lead as half-time approached, but Frenchman Jean-Kévin Augustin curled home a second for Leipzig early in the second half. Cometh the hour (literally), cometh the star man, however; Payet (below) scored a superb fourth to put Marseille back in the driving seat and, as Leipzig pushed late on, Japanese full-back Hiroki Sakai made the tie safe in added time.

Adil Rami
Centre-back, 32
In his first year at Marseille, Rami has been a consistent presence at the heart of the team’s defence. The 32-year-old, a veteran of 33 international appearances for France, has missed only a handful of games.

Rami’s experience is a huge asset to the Marseille defence. He has played across the top leagues in Europe, at Valencia, Milan and Sevilla. He was a Europa League winner for the latter, against Jurgen Klopp’s Liverpool, in 2016.

A powerful defender, he could be the man to deal with Atletico Madrid’s pantomime villain forward Diego Costa. He will provide aerial protection from crosses and set-pieces but can be exploited one against one, particularly when faced with smaller and more agile attackers.

Luiz Gustavo
Defensive midfielder/Defender, 30
Like Rami, Luiz Gustavo is also in his first season with Marseille, having joined from Wolfsburg in the summer of 2017. He offers key protection within central areas of the pitch, while in midfield or defence, and is the only Marseille player to start every one of their 18 games in Europe this season.

The 30-year-old (below, left) has a wealth of experience in the latter stages of European competition, twice going to Champions League finals with Bayern Munich. He was suspended for the 2011/12 final defeat to Chelsea, but came on as a late substitute as Bayern beat rivals Borussia Dortmund at Wembley the following year.

His main strength is during defensive transitions. He is an accomplished ball-winner, often destroying counter-attacks. In possession, Gustavo is a composed passer and can get forward in attack, especially when Marseille have adopted an attacking 4-4-2 structure.

Florian Thauvin
Attacking midfielder, 25
Now in his second spell with Marseille, Thauvin (above, right) moved to Newcastle United in the summer of 2015 but endured an unproductive spell, coming under criticism both on and off the field. He returned to Marseille on loan initially, with a permanent move confirmed in July 2017.

The 25-year-old is a major goal threat, and has enjoyed his most productive spell this season. He has scored 22 goals in Ligue 1, second only to PSG goal machine Edinson Cavani. He also has three goals in the Europa League and a combined assist total of 17.

Thauvin is usually deployed on the right side of attack, either as a winger or wide midfielder. This enables him to cut inside on to his left foot, attacking the goal directly, or drift infield to attack crosses coming from the left. Despite not possessing a particularly tall or large build, Thauvin has scored a number of headed goals from crosses and set-pieces this season.

Rudi Garcia, 54
After taking over early in the 2016/17 season, Rudi Garcia has enjoyed a successful spell with Marseille. A former professional player based mainly in France, he was a midfielder with a modest goalscoring record before injury forced him into early retirement at the age of 28.

Once retired from playing, Garcia took on various roles within football. These included physiotherapy, scouting and opposition analysis before he finally made the move into coaching and management.

Garcia’s early roles in management were consistent without featuring huge success, but it was during a five-year spell in charge of Lille that he made his mark. He took them to the heights of fifth and then fourth in his first two seasons, before completing a sensational league-and-cup double in 2010/11. He was unable to repeat the feat in the subsequent two seasons, but taking Lille into the Champions League got him noticed across Europe.

In July 2013, he moved to Serie A and took the top job at AS Roma. In two and a half seasons in the Italian capital, he twice guided them to the runners-up spot behind a dominant Juventus, before making his return to France with Marseille early last season. In his first full campaign with the southern giants, he has guaranteed a top-four finish – with one game of the season to go, second is still possible – and engineered a route to a major European final.

Formation
It is likely that Marseille will begin their Europa League final in a 4-2-3-1 formation (below). Both goalkeeper Steve Mandanda and attacking talisman Dimitri Payet may face late fitness tests, but both should be fit enough to start despite recent injuries.

In possession, they will look to attack in the wider areas. Both full-backs – Jordan Amavi and Bouna Sarr – will try to provided early crosses, aiming for the aerial presence of centre forward Valere Germain. Florian Thauvin and Lucas Ocampos in midfield will drive inside. They are capable of quick and direct attacks with short passing combinations, as they look to work the ball quickly through central spaces.

Payet will centrally drift, looking to receive at feet and cross early into Germain, or dribble through tight and crowded spaces with the ball. He loses possession frequently, but is capable of making match-winning chances or scoring crucial goals anywhere in the final third.

Attacking threat
Marseille are a flexible team when in possession. They can build attacks with direct forward passing after a quick regain, or they can sustain possession for longer periods, remaining patient while waiting for gaps to open through intelligent movement.

Most of their final-third entries will be focused in the wide areas (see below, left) – from their last 25 goals in all competitions, 17 have been built using attacking crosses. They don’t tend to have a preference for one flank – seven of those 17 goals have come from the left, and 10 from the right – but will provide effective deliveries from both sides.

Both full-backs will push forward in possession to provide crosses from the touchlines. Florian Thauvin will move inside from the right to support Valere Germain inside the penalty area. Lucas Ocampos will also move inside from the left, but much more sporadically than Thauvin; he also has a fine delivery from crossing situations.

Dimitri Payet is Marseille’s most consistent and technically cleanest striker of the ball. He will move into pockets of space and drive crosses at pace into the opponents’ penalty area from all angles.

Defensive fragility
Defensively, Marseille struggle with attackers who dribble at pace with a direct mentality. Luiz Gustavo is often deployed as a makeshift central defender, partnered with the strong Adil Rami. A large proportion of the goals they concede involve players dribbling in between the central defenders and the full-backs.

Their back line isn’t the quickest when sliding across to defend a switch of play. Gaps often appear, allowing quick-footed wingers to drive forward on goal. Opposing full-backs could also get forward to drag Marseille’s own full-backs away from the ball (above, right), giving the French side further defensive issues.

Marseille will look to make challenges in and around the penalty area to stop direct dribblers. They have, however, been prone to conceding penalties through ill-timed tackles, particularly against quick central strikers. In 18 European games so far this season, they have received 41 yellow cards and three red.