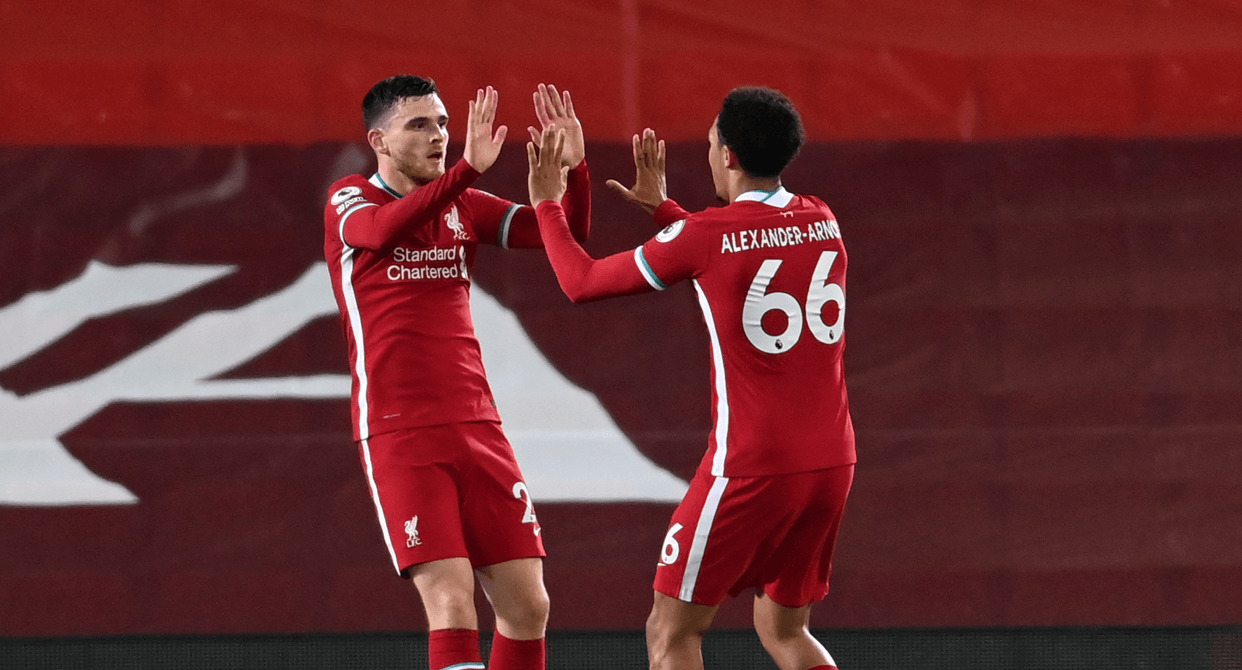 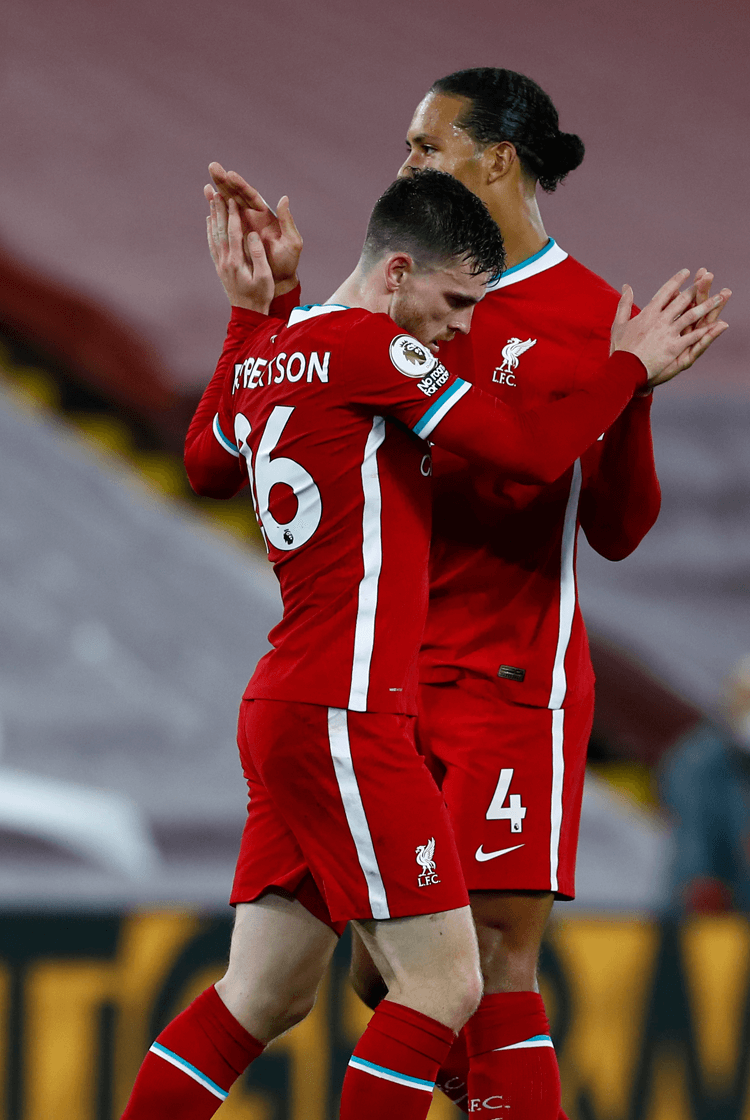 Liverpool's new £45m forward Diogo Jota scored his first goal for the club to secure all three points against Arsenal at Anfield. For all of Liverpool's dominance, they led by only one goal by the point of his arrival as an 80th-minute substitute, having been largely wasteful in front of goal, but the Portuguese put victory beyond doubt to ensure the defending champions joined Everton and Leicester on maximum points from their opening three Premier League fixtures. They had fallen behind during the first half when Alexandre Lacazette capitalised on an error from Andy Robertson to give Arsenal the lead, but Sadio Mané's finish soon brought them level, and the relieved Robertson then put them on course for the victory Jota put beyond doubt. Since Mikel Arteta's first match as manager in December 2019, Arsenal have dropped more points from winning positions than any other Premier League side. "The reality is they are superior to us in many aspects," the Spaniard said. "You could see that in some phases. I'm really happy in the way the team competed and kept believing. This is the standard we have to reach." His opposite number Jürgen Klopp said: "I'm completely happy with our performance. We played good football, we were flexible, we mixed it up." 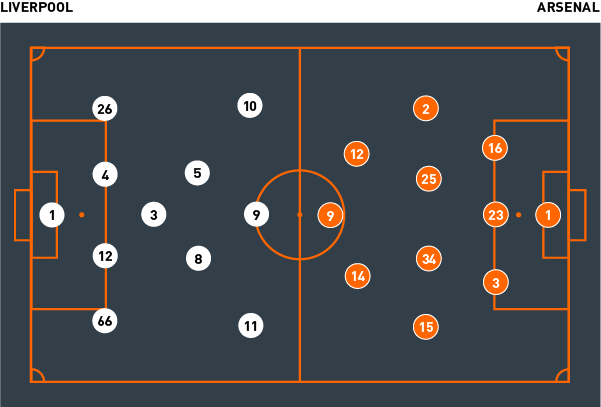 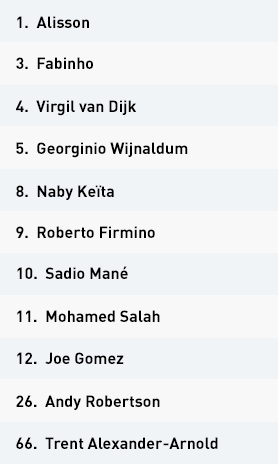 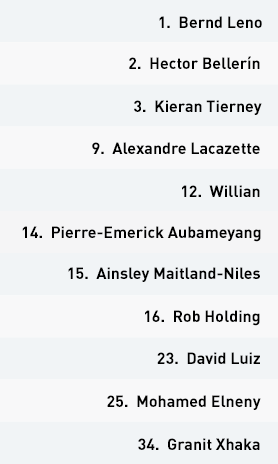 Liverpool were organised by their manager Jürgen Klopp into a 4-3-3 formation. Their visitors, Arsenal, most commonly defended with a 5-4-1, via Ainsley Maitland-Niles and Héctor Bellerín withdrawing from midfield and into defence, and Willian and Pierre-Emerick Aubameyang into midfield.

That Arsenal largely remained in a mid-block when they were without possession contributed to Liverpool having a large grasp of it. Mikel Arteta's team also showed an admirable ability to communicate and concentrate to apply what represented a coordinated press that, if timed incorrectly, would have become inconsistent and invited Liverpool to advance. While they were organised when defending against Liverpool's three central midfielders, when Roberto Firmino withdrew into midfield to create a four-on-three, Arsenal – surprisingly, given the regularity with which Firmino does so – were unprepared.

They slightly adjusted by Willian and Aubameyang adopting narrower positions and screening Georginio Wijnaldum and Naby Keïta so that either Mohamed Elneny or Granit Xhaka could follow Firmino. Liverpool, in turn, responded by Wijnaldum or Keïta operating as false full-backs, or Fabinho becoming a false central defender to encourage Virgil van Dijk and Joe Gomez to move wider.


When that gave them greater width, they were able to move possession horizontally and attempt switches of play, and to play both around and through Arsenal's narrow structure. Andy Robertson, Firmino and Sadio Mané combined towards the left by Robertson advancing to occupy Bellerín, and Mané making a diagonal run infield to towards Rob Holding as Firmino withdrew, or Mané also withdrawing so that Firmino could withdraw further. Arsenal were reluctant to follow Mané into half-spaces, inviting him to receive and to combine with Robertson and Firmino from there.

Liverpool were also willing to attempt longer passes in behind, particularly in an attempt to encourage Mo Salah to attack one-on-one against Kieran Tierney, as they continued to adapt. The diagonal pass from Van Dijk to Trent Alexander-Arnold in the build-up to their second goal was a demonstration of them responding to Arsenal pushing further forwards.

That Diogo Jota, James Milner and Takumi Minamino were introduced as substitutes showed Liverpool's increased depth. Jota consistently threatened in behind, contributing to the creation of some quality chances and providing the finishing touch to another. Their increasing options, and the ease with which they make tactical adjustments, means Klopp's team may even continue to improve.

Arsenal adopted the 3-4-3 formation Mikel Arteta is increasingly favouring, and on this occasion were led by the front three of Alexandre Lacazette, Pierre-Emerick Aubameyang and Willian. Their hosts remained in a 4-3-3.

They regularly sought to build possession and to play out from defence, but encountered a particularly aggressive press and a high defensive line. With Sadio Mané and Mo Salah pressing from the outside of Arsenal's back three, Granit Xhaka or Mohamed Elneny withdrew from midfield and into the penalty area to contribute to their build via a bounce pass with Bernd Leno, so Naby Keïta advanced to press both the midfielder and goalkeeper.

Though Arsenal often attempted to find Ainsley Maitland-Niles as their free man, Trent Alexander-Arnold would also advance to press him, and Joe Gomez would follow Aubameyang if the forward withdrew into a deeper position; if possession was in Arsenal's half, Liverpool limited space and forced a large number of turnovers. Their efforts also contributed to the visitors attempting long passes which, with Virgil van Dijk's aerial dominance, they were content for them to do. Fabinho resisted contributing to their press to instead remain positioned around 10 yards in front of Liverpool's central defenders, because he was the target of the second balls that followed those aerial contests.


Arteta wanted his front three to reach the spaces behind Liverpool's defence. His team's attempts to build possession were intended to draw their opponents out so that those spaces could be used, and it was when they succeeded – with runs being made from slightly in front of Liverpool's defence, to avoid being caught offside – that they posed their greatest threat.

Two players also combined to make runs in contrasting directions to contribute to the creation of those spaces. On the occasions runs were made behind – Lacazette regularly attempted to do so – it was common for steps to be taken into a deeper position before accelerating forwards, beyond Liverpool's defensive line.

Some of those runs were timed particularly well, but many weren't, and even when they succeeded, Alisson proved a capable sweeper against overhit passes, or goalkeeper if required to save. Beyond balls in behind, Arsenal struggled to create goalscoring chances; even the one they scored, though coming after decent build-up play, owed to a mistake from Andy Robertson.