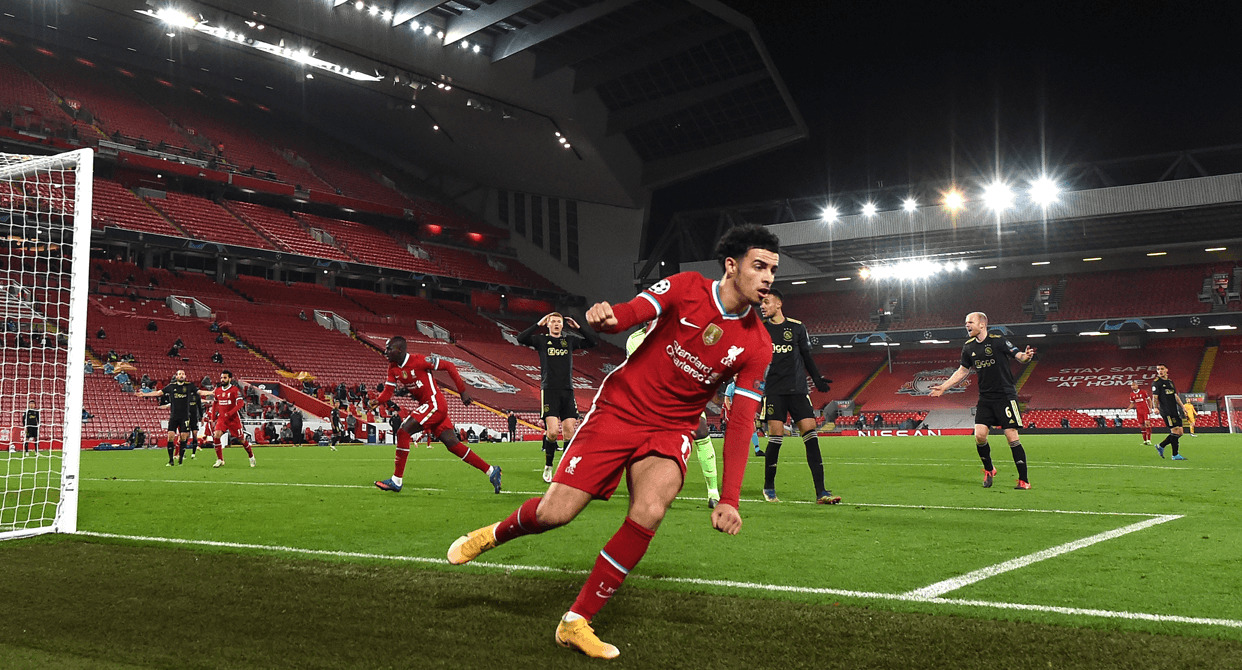 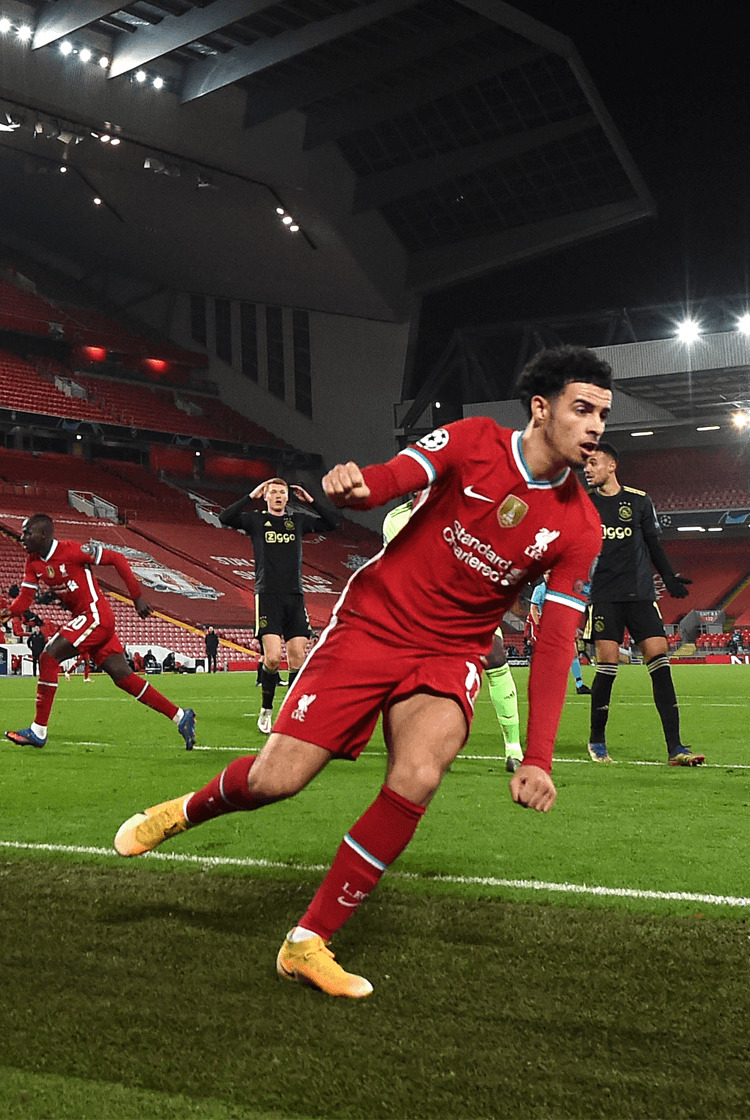 Liverpool's progress to the knockout stages of the Champions League was secured when Curtis Jones capitalised on a goalkeeping error to deliver all three points against Ajax. In the absence of the injured Alisson, Caoimhin Kelleher deputised, and was also forced to make a fine save from substitute Klaas-Jan Huntelaar to ensure a victory that was also threatened when Davy Klaassen and David Neres perhaps should have scored. It was in the 58th minute when André Onana misjudged the flight of Neco Williams' cross, gifting Jones a routine finish. "It's been tricky, and the boys threw themselves into the game," said Jürgen Klopp, who is without nine senior players because of injury. "Curtis Jones – what a game, amazing. I'm really proud." Onana said: "I am totally responsible for the loss. I have to accept the reality, because of me we didn’t draw and we didn’t win." 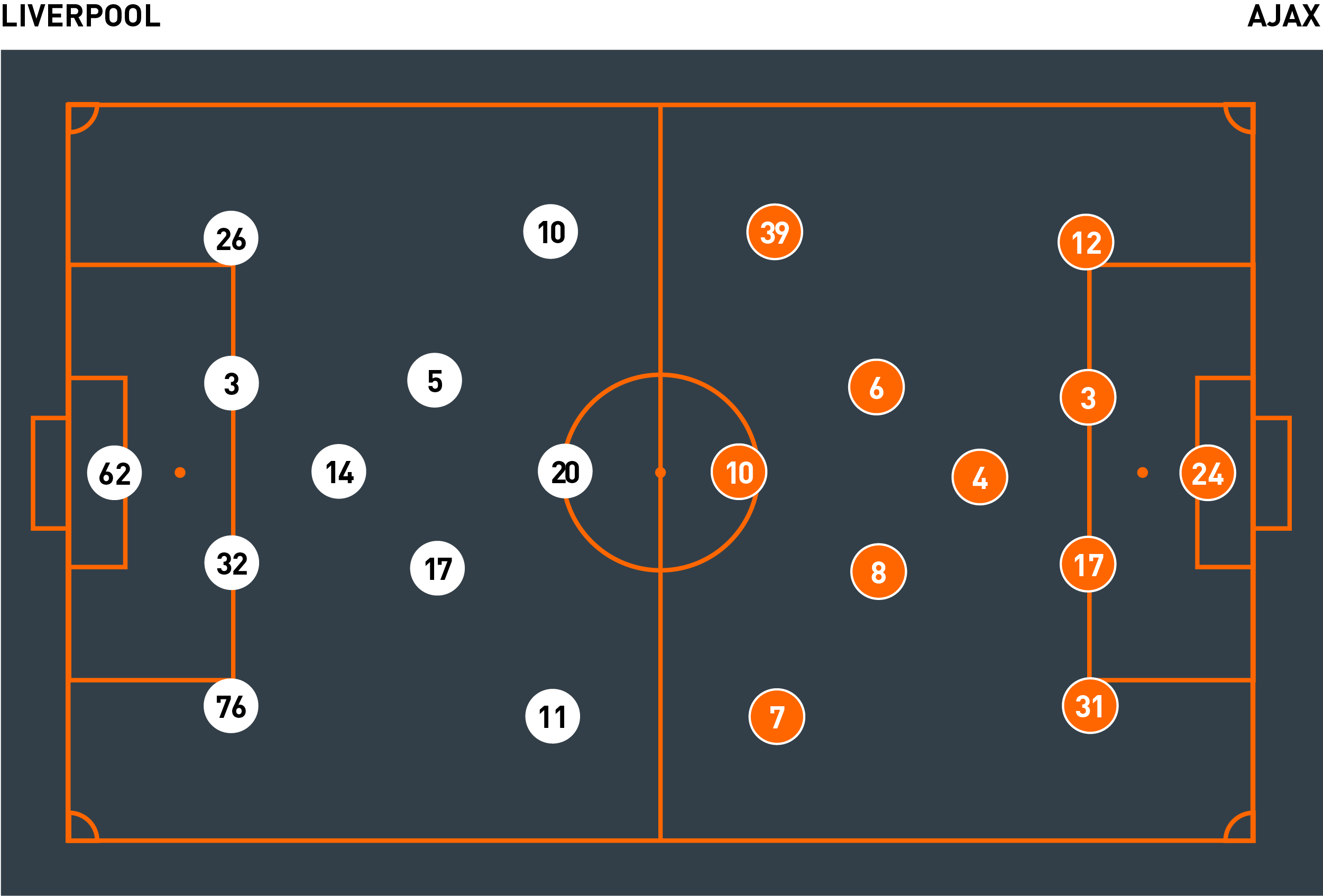 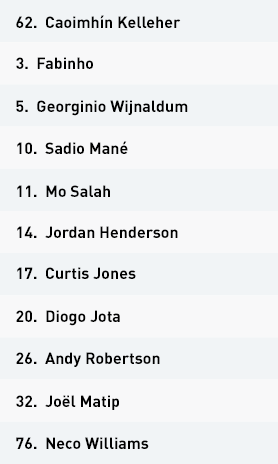 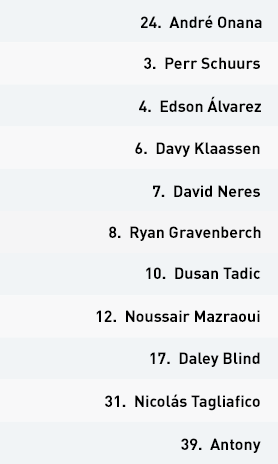 Liverpool were organised into Jürgen Klopp's favoured 4-3-3 formation, which on this occasion was led by Mo Salah, Diogo Jota and Sadio Mané. Their visitors, Ajax, defended with that same shape.

Ajax's press was led by their wide attackers Antony and David Neres taking Liverpool's central defenders, Dusan Tadic adopting a deeper position to towards the deepest positioned of Liverpool's midfielders, and Davy Klaassen and Ryan Gravenberch taking the remaining two. With Edson Álvarez therefore following Jota's movements, the hosts struggled to build possession from defence, and attempted to play long balls in behind for their front three to chase.

That play was so open meant that transitions were particularly key, and it was when they were attacking on the counter that Liverpool looked most threatening. With Ajax's full-backs advancing, after regains Liverpool often targeted the spaces they had vacated – and Salah and Mané – as early as possible; it was only a combination of poorly weighted passes or bad decision-making in the final third that undermined the potential that that should have offered.

They also sought to play diagonal passes, through the lines, into the feet of Salah and Mané after forcing Ajax's midfield to become more compact and create the passing lines they required. Ajax's full-backs were tested by the temptation to follow the relevant wide attacker because their defensive structure then didn't involve pressuring their opposing full-backs, who consistently remained free to make penetrative runs in behind if those wide attackers were followed; they, similarly, left those wide attackers free to receive if they didn't drop with them.


Movements between Liverpool's midfielders were also timed in a way that created penetrative passing lines. The ballside midfielder and Georginio Wijnaldum provided contrasting, horizontal movements when the ball was being played within or carried out of central defence, drawing Ajax's midfielders and creating the space required to play through to those in front of them.

Curtis Jones and Jordan Henderson regularly used their next movement to attempt to take a set pass from the receiving attacker, and to look for the next option to progress play. Jota also regularly dropped into midfield, often into the half-spaces and wide areas, to take a defender with him and free up a teammate – most commonly a full-back or wide attacker.

Jota's movements also triggered off-the-ball runs from Henderson and Jones. It was one such run from the latter that led to their winning goal.

Ajax manager Erik ten Hag again used the 4-3-3 formation that has brought them such success, and that featured Edson Álvarez, Davy Klaassen and Ryan Gravenberch in midfield. Their hosts, Liverpool, also remained in a 4-3-3, on this occasion featuring Fabinho and Joël Matip in central defence.

Mo Salah and Sadio Mané led Liverpool's press by closing down Ajax's central defenders and working to screen passes into their-full backs; Diogo Joto took Álvarez. Ajax were ambitious in possession and willing to receive under pressure in an attempt to feed their full-backs, most commonly their free players.

They regularly built via Álvarez and Granvenberch forming a double pivot that forced Liverpool's defensive structure to become more narrow, in turn improving access to those full-backs, who Jürgen Klopp's team struggled to press. Liverpool's full-backs were prioritising Ajax's wide attackers; and their midfielders were taking their opposite numbers. Through Jota taking Álvarez to free up Georginio Wijnaldum to take the ballside central midfielder, Liverpool's ballside midfielder could close down the relevant full-back, but Ajax adapted via Dusan Tadic withdrawing into the half-spaces to receive.


Ajax's success in accessing their full-backs forced Liverpool to withdraw into what was closer to a mid-block. When they received the ball, a forward pass in behind the hosts' full-backs for the relevant wide attacker followed. If that sequence unfolded more regularly towards the right than left, Andy Robertson defended well against it.

Álvarez often remained in a deep position to encourage Noussair Mazraoui and Nicolás Tagliafico to advance and contribute to the creation of two-on-ones in wide positions, from which they played crosses into the penalty area. Complemented by runs from Klaassen, some promising goalscoring chances were created, and perhaps should have been taken.

Those overloads, and Tadic's potential from the half-spaces, meant that Ajax most regularly advanced through the wide areas. Once they had progressed into the attacking half, diagonal passes were played infield, and were followed by a forward run from a third player in an attempt to beat the next line of Liverpool's structure. Doing so helped them to access the spaces behind Liverpool's defence, but a lack of quality from in front of goal undermined them.