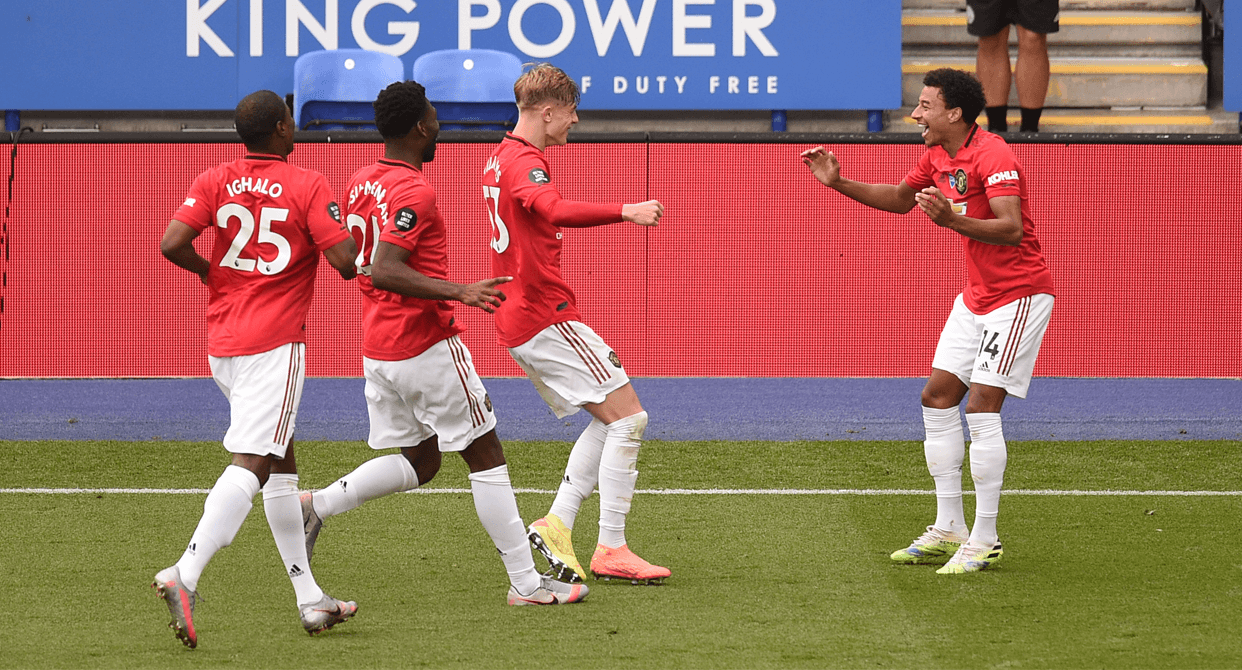 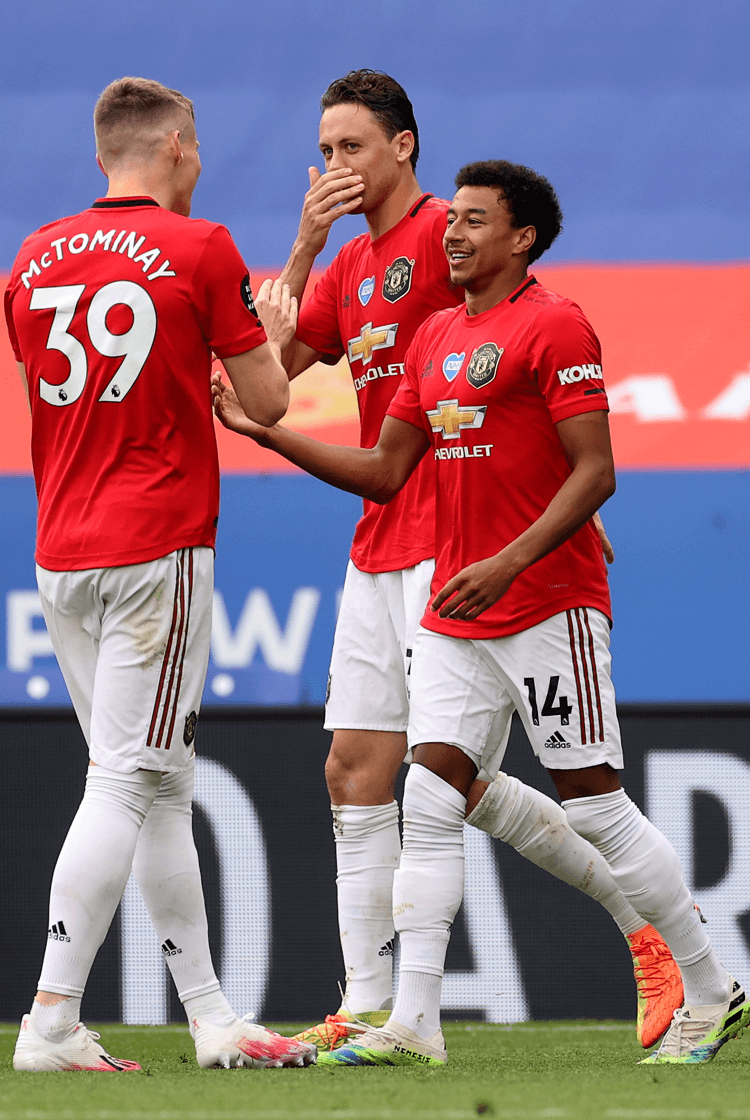 Manchester United secured qualification for the Champions League at Leicester's expense when a second-half penalty from Bruno Fernandes and Jesse Lingard's late finish took them up to third in the Premier League and ensured Leicester, who spent most of 2019/20 in the top four, finished the season in fifth. The January arrival of Fernandes has been largely responsible for transforming United's fortunes – and enhancing Ole Gunnar Solskjaer's reputation – following a challenging start to the season, so it was fitting when the Portuguese's goal appeared to secure qualification on an afternoon when only victory would have been enough for Brendan Rodgers' team. Since making his Premier League debut, his total of 15 goals and assists means Fernandes has been directly involved in more in the competition than any other player; another of Solskjaer's influential signings, Harry Maguire, also became the first outfield player since Gary Pallister in 1994/95 to start every league match for United in a single season. 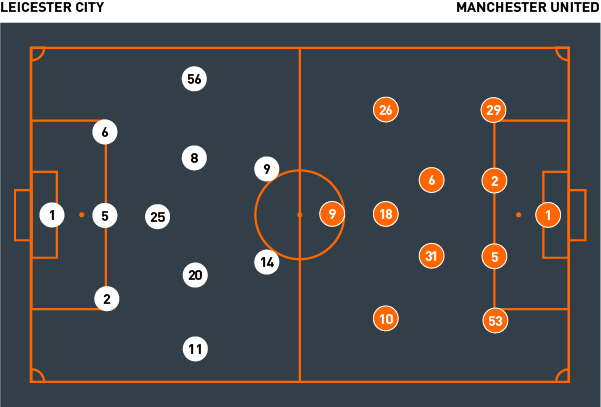 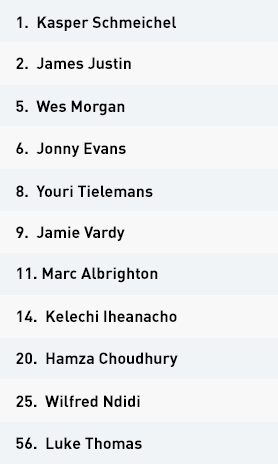 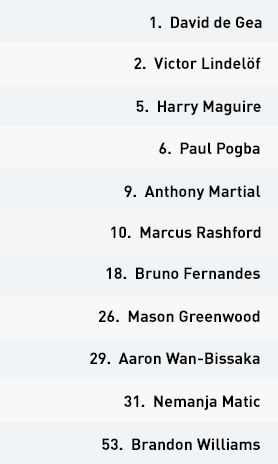 Brendan Rodgers set Leicester up in a 3-5-2 formation, in which Kelechi Iheanacho withdrew from their front two to link their midfield and attack. With Manchester United lining up in a 4-2-3-1 mid-block, and Nemanja Matic often dropping deep during his side’s build-up play, Paul Pogba was left as a single pivot, leaving more space for Iheanacho to operate in; this space was also enhanced by Jamie Vardy’s runs in behind, which forced United’s defence back.

Once Harry Maguire had received a booking for a foul on Iheanacho, the visitors’ defenders were less willing to step out and attempt to stop Iheanacho turning. Whenever Matic remained in a double pivot alongside Pogba, however, Iheanacho withdrew further, looking to create a four-on-three in the central lane, along with Wilfred Ndidi, Hamza Choudhury and Youri Tielemans.

When Leicester managed to pin their opponents back in a deeper block, Vardy and Iheanacho were largely responsible for pushing United's defence backwards. Spaces therefore existed for wing-backs Marc Albrighton and Luke Thomas to progress into, and they regularly delivered balls into the penalty area but, for the most part, those crosses were dealt with by United's central defenders.


Mason Greenwood often tracked Thomas’ runs, but as Marcus Rashford didn’t always do the same with Marcus Albrighton on the opposite wing, Brandon Williams was forced to advance from left-back and instead press him. With United’s entire defensive unit therefore moving across to cover, spaces were left for Leicester in the inside channel on the opposite side of the pitch. The hosts were only unable to take advantage because of their poor passing in the final third.

Despite prolonged spells of possession, Leicester’s best moments in attack stemmed from moments immediately after they regained the ball high up the pitch, especially when dispossessing one of United’s deep-lying midfielders. As with their patient play, their attacks during transitions were ineffective despite several occasions when they had an overload.

Youri Tielemans advanced to contribute in the final third, through rotating positions with Iheanacho, and Vardy focused on the left inside channel behind Victor Lindelöf. United regardless remained in a narrow shape, and restricted access to Vardy. Leicester therefore looked most dangerous when building play towards the right, where Iheanacho – who was later replaced by Ayoze Pérez – moved across to link play and then target Vardy at the far post.

The closest Leicester came to scoring was when Vardy’s looping header bounced off of the crossbar from a routine set-piece; they were unable to take advantage of any central spaces after a regain. United impressively defended against Leicester’s attempts to progress into the final third, and their incredibly compact defensive line, which involved all 10 outfielders, completely negated Leicester's attacking potential. Once the visitors took the lead, they comfortably protected it until Jesse Lingard’s late strike put victory beyond all doubt.

Manchester United were organised by Ole Gunnar Solskjaer into a 4-2-3-1 formation in which their full-backs advanced and Nemanja Matic withdrew into central defence. When he formed a three alongside their central defenders, Brandon Williams and Aaron Wan-Bissaka advanced around Leicester's three central midfielders, and with wide forwards Marcus Rashford and Mason Greenwood occupying their opposing wing-backs, United regularly progressed possession in wide positions.

Brendan Rodgers favouring three central defenders and a 5-3-2 meant that Anthony Martial was often isolated and, with the hosts' central midfielders limiting the spaces between the lines that Bruno Fernandes relishes, United struggled in the final third during the first half. It was when Fernandes or Martial drifted into a wider position in the left inside channel, and balls were played between or over James Justin and Wes Morgan, that those attacks had a focus, but Leicester also defended well against those, forcing Rashford into an increasingly withdrawn position from where he struggled to pose a threat on goal.

Through both Rashford and Greenwood being forced to track the relevant wing-backs into deep positions, United's counter-attacking potential was particularly undermined. Even with the pace they continued to offer in wide areas, the distances they needed to travel meant that Leicester were able to defend against them in numbers.


On the rare occasions Fernandes received between the lines, the most central of Leicester's central defenders, Morgan, often advanced to press, and Jonny Evans and Justin either side of him adopted narrower positions around Martial. Martial continued to prioritise the left inside channel, but Justin's impressive pace meant him recovering his defensive positions and often negating Fernandes' attempts to play to Martial. When Fernandes had increased spaces to receive away from Leicester’s central midfielders, his execution was also uncharacteristically poor; even when Paul Pogba and Matic instead played Martial in, Justin and Evans continued to frustrate the forward.

Greenwood and Rashford adopting narrower positions created penetrative moments beyond Leicester’s defence; Greenwood often drew George Thomas inside, but when Rashford was in possession he instead took Justin wide, giving Martial fewer opponents to overcome.  A combination of Leicester briefly defending with a low block, and United struggling to play the final ball, inhibited them, however.

It was when a poor pass from Hamza Choudhury was seized upon that Martial was finally released into the nature of position he relishes, and was brought down to earn United the penalty that essentially secured victory. Their reserved approach, focused largely on absorbing Leicester's ineffective attempts to attack, from their disciplined defensive block had succeeded.