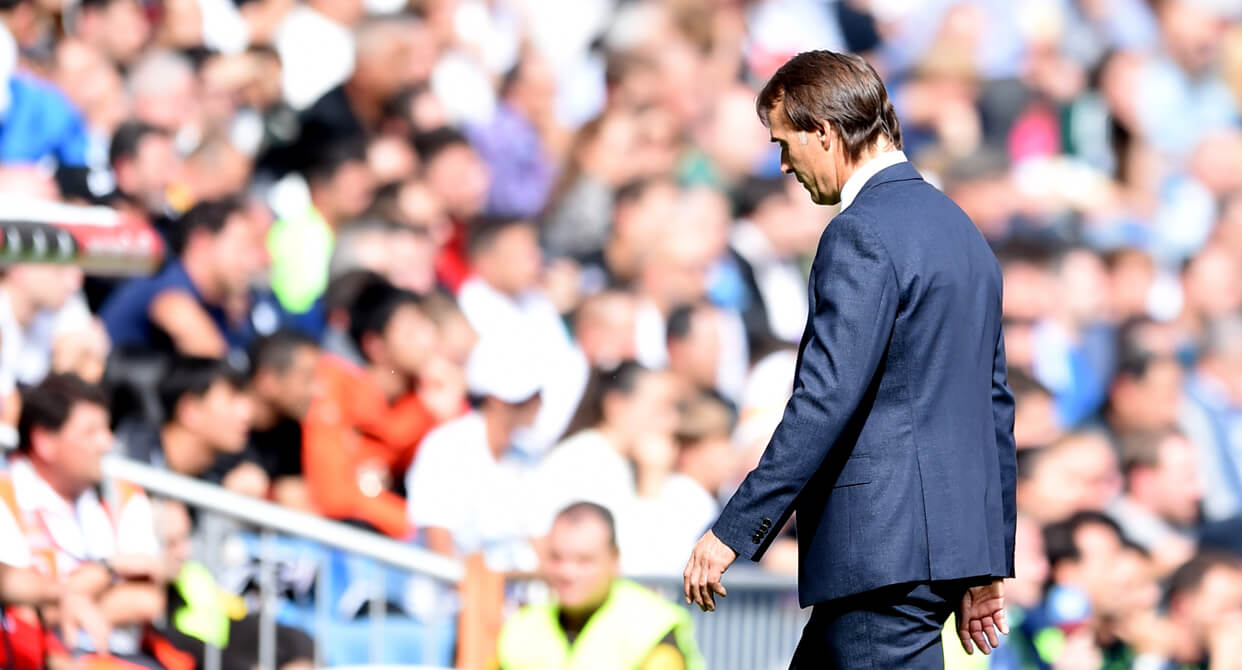 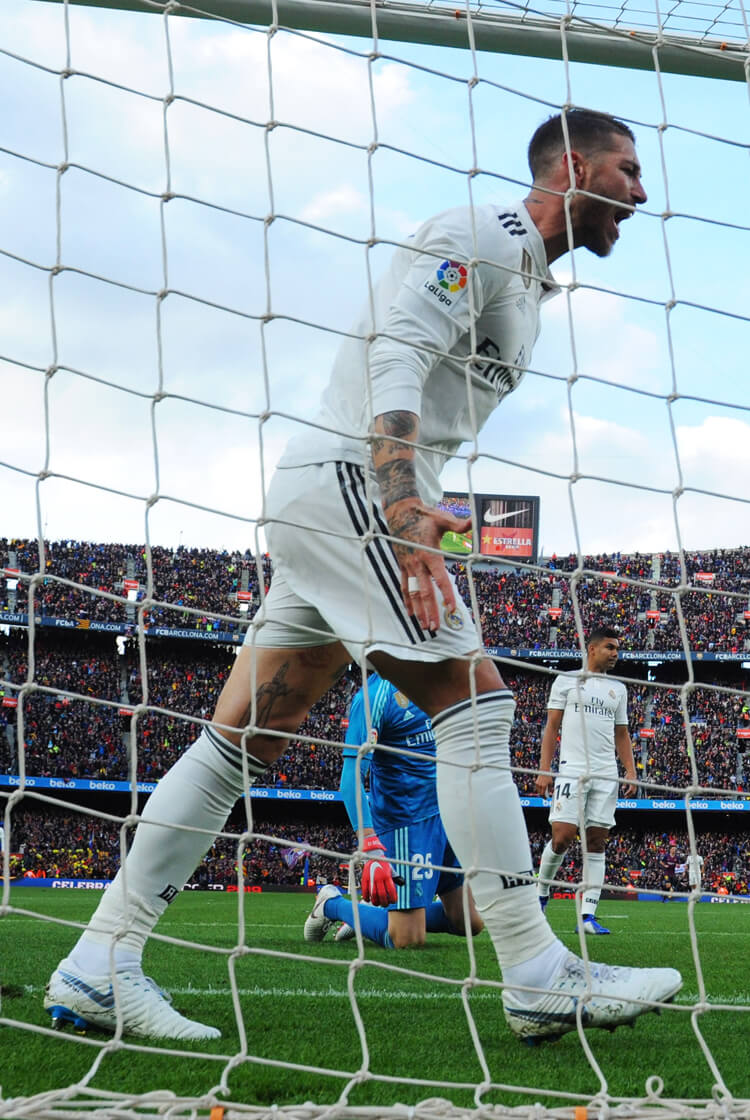 That’s how long Julen Lopetegui lasted in the Real Madrid job, with a 5-1 drubbing at the hands of arch rivals Barcelona the final straw that broke Florentino Perez’s patience. After the controversy surrounding his appointment, which ended his tenure as the Spain national team coach a matter of days before the World Cup, Lopetegui has now lost two of the biggest jobs in world football within the space of five months.

The former goalkeeper took over from Zinedine Zidane, who stepped down in surprise fashion in May after leading Real to three consecutive Champions League titles. Despite the departure to Juventus of the club’s greatest ever goalscorer, Cristiano Ronaldo, Lopetegui still inherited a squad full of talent and experience. Over the summer, this was embellished with the arrivals of goalkeeper Thibaut Courtois from Chelsea, the exciting young Brazilian attacker Vinicius Junior, right-sided defender Alvaro Odriozola from Real Sociedad, and former Madrid forward Mariano for a second spell at the club. Replacing the goalscoring feats of Ronaldo was always going to be a virtually impossible task, but the return of Mariano after a successful yet brief spell in France still looked like a downgrade. Lopetegui also failed to source adequate cover at left-back, with both Nacho and youngster Sergio Reguilon looking uncomfortable when covering for first-choice Marcelo.

Lopetegui set Madrid up in a 4-3-3 structure for the majority of his time in charge, although there were brief spells in a 4-2-3-1. Towards the end of Zidane’s reign, the Frenchman often used a 4-4-2 formation, looking to maintain Ronaldo’s presence alongside Karim Benzema in the central lane. But with the Portuguese forward gone, Lopetegui’s reverting back to a 4-3-3 – a formation he had preferred both at Porto and with the Spanish national team – initially made sense. He focused on building attacks with consistent and repeated short passes. Although this possession-dominant strategy enables control of the game, it also requires penetration or creativity in the final third; without that, deeply congested opponents can become a real chore to break down – something Real found to their cost during a four-game goalless run from late September into October.

Statistics
Lopetegui made a reasonable beginning in his new surroundings, despite going down in extra time to Atletico Madrid in the Spanish Super Cup – his first competitive game in charge. Five wins and one draw – away at Athletic Bilbao in La Liga – from his next six games represented a perfectly acceptable start, as Real kept pace with Barcelona at the top of the league.

It was the second half of his tenure – the next seven games – that cost Lopetegui his job. Only winning once – at home to Champions League group whipping boys Viktoria Plzen, and that only 2-1 – would have been a disastrous return for many teams. For Madrid, it was catastrophic.

The goal drought in the second period of his tenure was not down to a lack of shots, however. In Lopetegui’s final seven matches, Madrid averaged one shot more per match than they had in the opening seven. It was the accuracy of these efforts that dramatically dipped – from 42 per cent on target in his first seven games, down to 34 per cent in his final seven.

Compare this with Zidane’s final seven games in charge, when Real actually took five fewer shots per game, but had a much improved accuracy rating of 44 per cent. Contrasting stats from the end of one season with the beginning of another isn’t necessarily an exact science, but the suggestion is that Madrid have created enough chances for their front line to have done much better than they did under Lopetegui.

Tactics
Lopetegui’s 4-3-3 structure started the season well enough, but there were early signs that the players were struggling to adapt to his pressing system. Despite defeating AS Roma 3-0 in their opening Champions League fixture, two second-half goals gave the scoreline a healthier look than their display warranted; the Italian side repeatedly penetrated through Madrid’s high press, as they exploited the enlarged central spaces left by the likes of Toni Kroos and Casemiro (above).

The weakness in Madrid’s press was exposed only a week later by Sevilla, whose 3-5-2 formation worked to devastating effect as they took a 3-0 lead at half-time. With Luka Modric utilised in a much higher number 10 role, the Croatian struggled when pressing Sevilla’s back three, and single pivot Ever Banega. When Kroos and Casemiro also stepped higher to support Modric, one of Sevilla’s forwards – Andre Silva (below, right) or Wissam Ben Yedder – would drop back to maintain the overload and exploit the gaps around Madrid’s central pressing unit (below, left).

A second-half change of formation stemmed the tide, but by this point the damage was done. Another second-half change of structure against Barcelona in what turned out to be his final game was another example of how Lopetegui could have adapted his tactics much earlier; despite the final scorelines in both cases, Madrid’s displays in possession were encouraging in both second halves.

The shift to a 3-4-1-2 structure against Barca, with Casemiro dropping back as a third central defender in between Sergio Ramos and Nacho, was a bold move – but it definitely had a positive impact on their performance with the ball. Had Modric’s shot gone in to make it 2-2, rather than hit the inside of the post and roll across the line, Lopetegui could still be in the job. Such are the fine margins at play in elite football.

From this new structure, Lopetegui’s principles of attacking width were consistently established by wing-backs Marcelo and Lucas Vazquez, with Kroos and Modric combining well in central midfield. Isco also now had the freedom to drop into central midfield, which could create a trio (above) to match any opponent, such as Barcelona, that utilises a three in central midfield. Isco would then also have the licence to move higher between the lines, and rotate with Benzema – who often likes to move away from the opponents’ defence and link the play, particularly towards Marcelo on the left.

By also moving Gareth Bale into a central attacking role against Barcelona, Madrid would still have players occupying the opposition defence, whether Benzema dropped short or not. Quick combinations between Real’s front two will create regular problems for any defence, as they can both link attacks well – something they demonstrated last season, alongside Ronaldo and under Zidane.

Despite all of this, however, Real still lost the second half against Barcelona 3-1. Their central defenders made consistent mistakes throughout the game, and against the revised structure Barca were better able to get immediate access to their front line – especially during moments of transition, as their wide attackers were afforded more space in which to receive and attack (above, left). Whoever takes over the permanent role at the Bernabeu must surely make improvements in defence – both on the training pitch and in the transfer market – priority number one.

Players
Despite the criticism he usually – and quite often unfairly – receives, Karim Benzema’s season meandered to a disappointing halt under Lopetegui. After scoring five goals in the opening four matches, the former French international (below) managed only one goal in his next 10. He was back on the goal trail in Real’s first game under caretaker boss Santi Solari – a 4-0 stroll past lower-league Melilla in the Copa del Rey.

Although he has continued to link well with left-back Marcelo, Benzema desperately misses the presence of an attacking partner to rotate and fill the central attacking role as he moves towards the ball. Movements that Ronaldo performed so well with Benzema over the years have been largely absent in Lopetegui’s 4-3-3 structure. Only when Bale was moved into a more central position (below) have we seen the best of Benzema in open play. With more supporting central presence over the course of the season, Real can expect a better return from a player one short of 200 goals for the club.

Another attacker who seemingly struggled under Lopetegui was Gareth Bale. Now firmly out of the Ronaldo shadow, the onus is on the Welshman – one of the world’s most expensive players, lest we forget – to consistently deliver. Moving Bale across to the left more frequently could have been a solution for Lopetegui, thus replacing Ronaldo both in transition and during prolonged spells with the ball.

When counter-attacking from deep, there aren’t many better equipped players than Bale. Despite being predominantly left-footed, his goal against Roma earlier in the season – and plenty over the years, including a stunner against Barcelona in the 2014 Copa del Rey final – proves his ability to finish from the left. Plus, link-up play with Benzema on the left side could also get the best out of both of Madrid’s main goalscoring threats, as they attempt to cover the loss of Ronaldo’s goals.