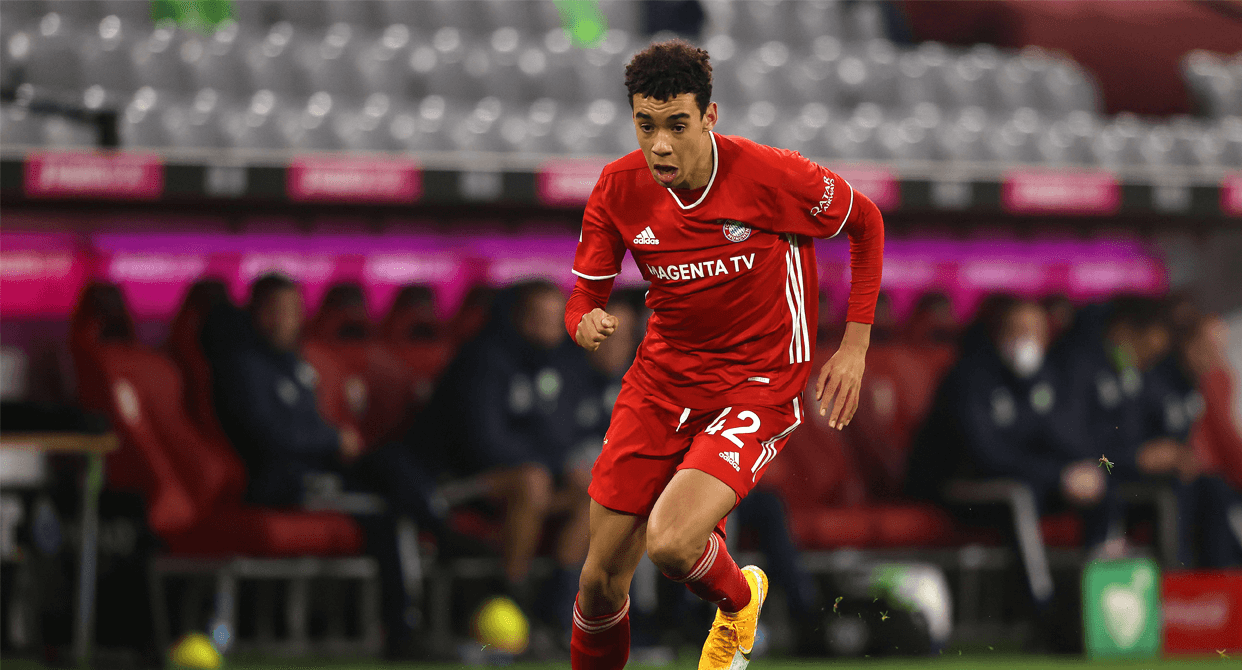 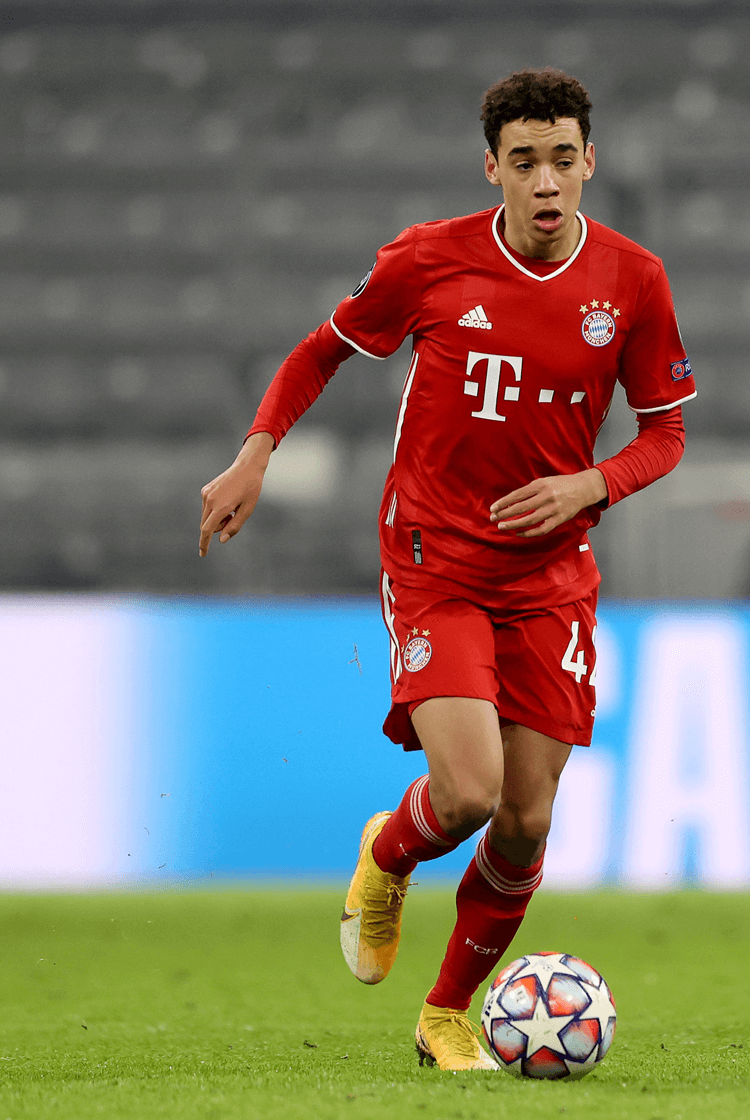 Profile
At a time when Bayern Munich's remarkably successful team is showing the first signs that it will soon have to be rebuilt, Jamal Musiala has potentially established himself as one of the most exciting prospects in Europe – and therefore suitable to their future plans. Even before turning 18 in February 2021, he had demonstrated his rich promise in the Champions League, and a successful international career with Germany is expected to follow as a consequence of his decision to commit to them over England.

"He has a great eye and feeling for choosing the right spaces," said Bayern's respected manager Hansi Flick of a player who came through the academy at Chelsea. "He is very confident on the ball and can play well between the lines."

Tactical analysis
Musiala is an extremely versatile midfielder who has already proven himself in both wide and central positions. Favouring his right foot, he frequently scans to build his awareness of his surroundings – judging where defensive pressure is likely to come from and, if wide, where best to dribble or play passes – and in so doing enhances his decision-making. When in possession in a wide position, Musiala is regularly capable of beating opponents one-on-one (below), via taking numerous small touches that give him the freedom to quickly change direction, even though he is sufficiently physically gifted he is capable of running at speed over longer distances.

His passing ability has contributed to him featuring as both a number 10 and as one of two defensive midfielders, but it is in the latter role where his passing range has greater potential, when he links defence to the rotating attackers in front of him via his variety of passing techniques. A similar variety is demonstrated when he shoots, regardless of whether it is his preference to place the ball with the inside of his foot.

If he is selected as a number 10, Musiala instead plays more transitional passes into those making forward runs, and he impresses when, on the counter, playing both in behind defences and to those travelling infield from wide starting positions. When targeting a striker withdrawing into a deeper position, he struggles to do so with the same timing and precision. Similarly, if playing passes during prolonged attempts to build play, he remains more effective when playing to those out wide; particularly when positioned between the lines, his passing accuracy and timing from and to central positions needs to improve.

Regardless of that relative rawness, there unquestionably exists an intelligence to his passing. He recognises which foot to play to his teammate on, but he is more effective at doing so towards the right than left. If he can complement improving towards the left with playing better quality passes inside his opposing full-back – ones not unlike those he plays during moment of transition, and that mean his teammates don't have to receive and then beat their opponent – he can offer even more.

When required to defend and press, Musiala does so with energy, and with the judgement that contributes to him predicting passes and making interceptions as well as edging duels when defending one-on-one. He is particularly effective at screening passes and blocking off passing lanes as he approaches the ball, when he then relies on his agility and reactions to make interceptions – and it is in the middle third of the pitch where he most efficiently does so.

His defensive traits also contribute to opponents making errors, and therefore teammates collecting loose balls. Even if he hasn't himself directly recovered the ball, his efforts regularly prove both positive and influential.

Role at Bayern Munich
Bayern have long most regularly been organised into a 4-2-3-1, and Musiala has featured in the double pivot at the base of their midfield, as their number 10 from where he has supported Robert Lewandowski, and as one of their penetrative wide forwards. When one of their two defensive midfielders he is often the more assertive – Bayern form a back three to encourage both full-backs to advance, via the other defensive midfielder withdrawing to between or to one side of their two starting central defenders.

Musiala's qualities are better suited to linking midfield and attack, and the influential Joshua Kimmich is so effective at starting the first phase of their build-up that Musiala often plays the more advanced role of the two. Even if he remains in central midfield and Kimmich – or Leon Goretzka – moves into central defence (above), he rarely features as a single pivot because he is instead commonly joined by their starting number 10 or a wide forward.

His positioning and qualities in possession under pressure encourage Bayern's full-backs to advance, their wide forwards to move infield, and their defensive line to spread. Kingsley Coman, Serge Gnabry and Leroy Sané, their senior wide forwards, regularly attack infield as inverted wide players moving on to their stronger feet, and Benjamin Pavard and Alphonso Davies provide overlaps from full-back. Within that wider picture, Musiala's play from a deeper position mostly comes towards the left, where he links with Davies and the relevant wide forward.

It is his versatility (above) that also makes him capable of supporting through the inside channel – a more regular occurrence when their wide forwards remain wide and instead prioritise attacking around the outside of their opponents. The defensive midfielder alongside him instead remains in midfield and their full-backs resist advancing to the same extent, presenting Musiala with the freedom to attack. Coman is likelier to attack with width; Gnabry instead favours cutting inside on to his right foot to shoot, or to combine with Thomas Müller and Lewandowski.

Should Musiala, instead of Müller, be their number 10, he instead concentrates on linking with whichever of Sané, Gnabry and Coman is alongside him (above). His central positioning and subtle movements draw defenders away from Lewandowski, who consistently remains their focal point.

On the occasions he is selected wide, Musiala poses an increased dribbling threat. He is more likely to be selected towards the left, from where Davies will overlap him and where, given he is right-footed, Musiala regularly cuts infield to combine with others – Lewandowski's subtle movements away from defenders, the fluid movements Müller offers, or Sané’s blindside runs from the right – the latter via an aerial pass towards the back post. If no such combination is possible, he is similarly capable of shooting and directly threatening on goal.