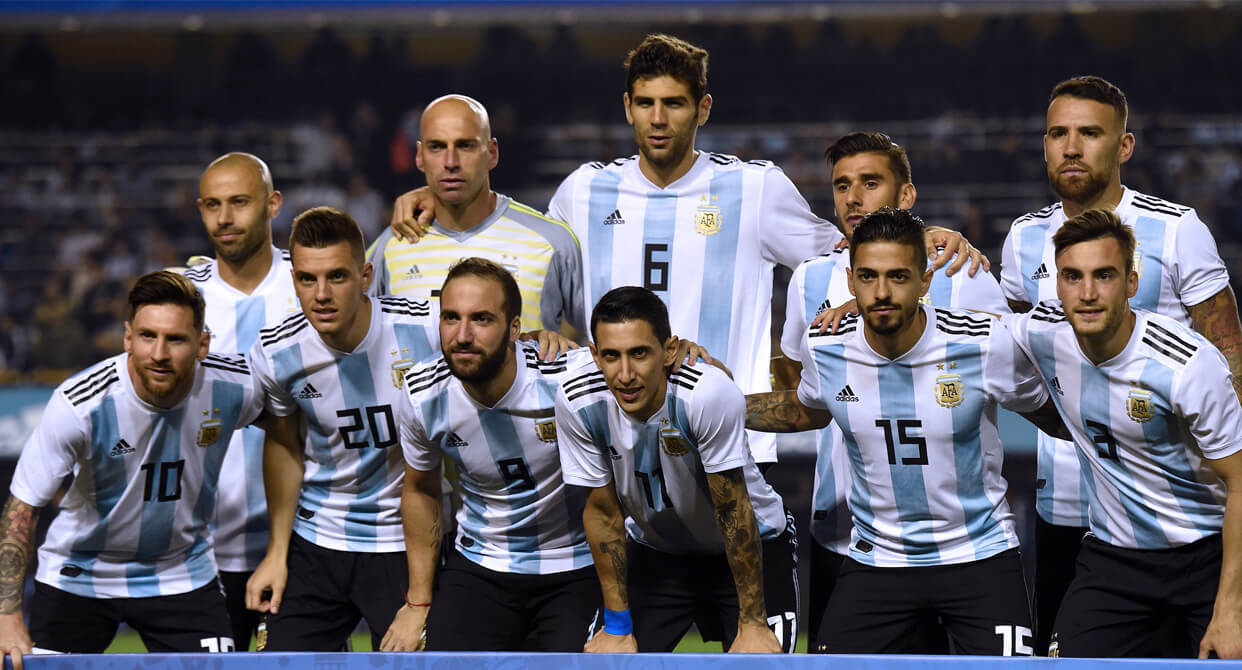 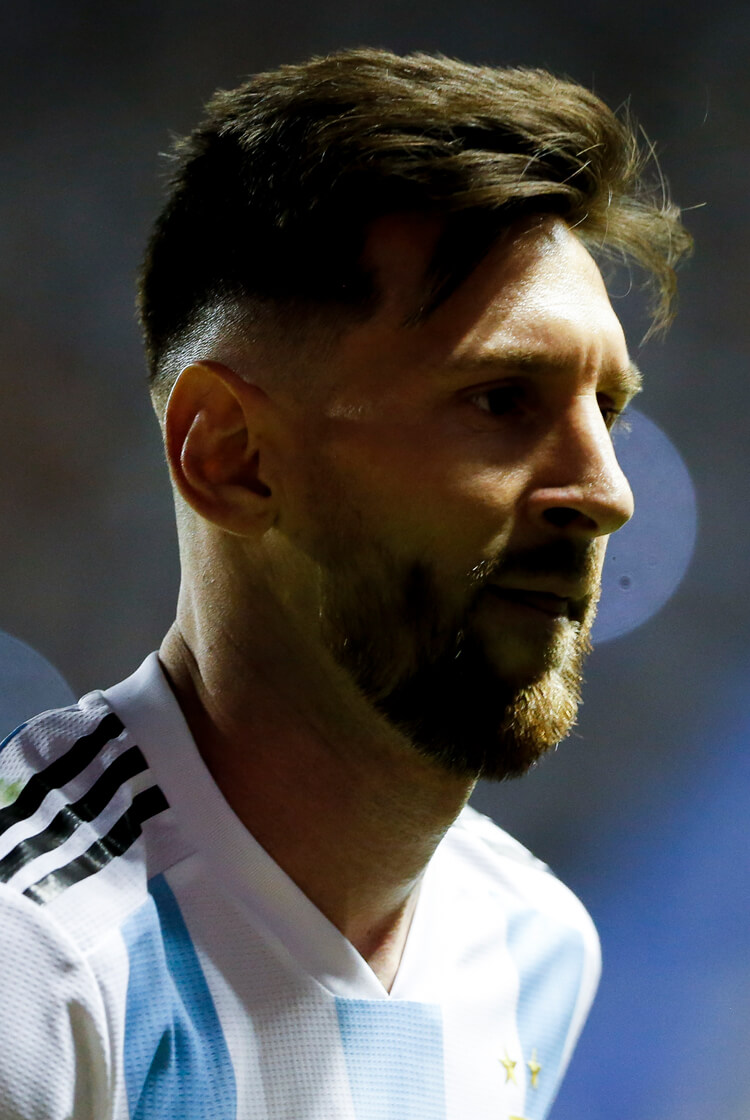 Qualifying route
The 2014 runners-up Argentina secured a place at this summer’s World Cup only in the final round of the South American qualifiers. A 3-1 victory in Ecuador, achieved despite going a goal down in the first minute, secured third place for La Albiceleste after a very mixed campaign.

Strangely, the two-time winners had three different head coaches in the same qualification campaign. Former Barcelona manager Tata Martino oversaw only six qualifiers, quitting the post after leading Argentina to a second consecutive Copa America final defeat to Chile in the summer of 2016. His replacement, Edgardo Bauza, lasted only eight qualifying games, sacked after a 2-0 defeat in Bolivia left the team outside the top four automatic qualifying spots.

Finally, Jorge Sampaoli – the Argentine coach who had led Chile to a first ever Copa America victory in 2015 – was appointed to oversee the turnaround. In four qualifying games, Sampaoli guided Argentina into third place with three draws and that dramatic sole victory against Ecuador.

Brazil 3 Argentina 0
After an inconsistent start, Argentina travelled to Brazil for match 11 in need of points. Even with star man Lionel Messi returning from three games out injured, La Albiceleste struggled to connect their powerful front line, as Gonzalo Higuain and Angel Di Maria also disappointed.

Brazil went ahead through a superb curling drive from Philippe Coutinho, and doubled their lead when Neymar slid home his 50th goal for Brazil. Midfielder Paulinho added a third in the second half, as Argentina’s star-studded lineup failed to fire. After a fourth straight qualifier without a win, the pressure started to grow on coach Edgardo Bauza – three games later, after a 2-0 defeat in Bolivia, he was gone.

Ecuador 1 Argentina 3
After starting his reign with three consecutive draws, Jorge Sampaoli took his team to Ecuador for the final game of the campaign with Argentina’s qualification hopes hanging by a thread.

And they got off to the worst possible start. Not even 40 seconds had passed when midfielder Romario Ibarra guided the ball past Sergio Romero, with the Argentine defence seemingly slow to adapt to the altitude in Quito.

From here, however, Lionel Messi (above) took control. The captain dragged his team back into it 10 minutes later, after a lovely exchange with Di Maria. He powered home a second not long after, to earn Argentina the lead, and completed a memorable and vital hat-trick with a trademark dribble and exquisite chip early in the second half. Messi had come to the rescue, again, and his team had qualified for a 17th appearance at the World Cup finals.

Aggressive central defender Otamendi rose through the ranks at Velez Sarsfield in the Argentina Primera Division. After breaking into their first team, and gaining plaudits both domestically and abroad, a move to FC Porto followed. From a successful trophy haul at Porto – including three domestic championships and a Europa League crown – to a sole season in Spain with Valencia, during which he headed a winner against Real Madrid, Otamendi’s stock slowly grew. In the summer of 2015, he joined Manuel Pellegrini at Manchester City; in three seasons since, he has become an integral part of the City defence that has won two League Cups and, under Pep Guardiola, another Premier League title.

Throughout his career, Otamendi (below, left) has been a tough-tackling defender, willing to put his body on the line to block shots, crosses and anything else the opponent has to throw at him. Under Guardiola, however, he has also become a calming influence in possession. In the 2017/18 season, he broke the Premier League record for most completed passes in a single season – with five games still remaining.

He is comfortable when building short from the goalkeeper but is also improving on when and how to drive out of defence – a useful trait, as driving forward into midfield can lure opponents into an individual press, often leaving their marker in the process. With Argentina’s attacking firepower, the last thing opponents will want is a central defender driving out to find an unmarked Lionel Messi or Angel Di Maria.

Angel Di Maria
Midfielder, 30, PSG
Despite representing his country for what seems an eternity, 30-year-old Di Maria (above, right) is still a huge presence for the national team. Rising through the ranks of Rosario Central in his native Argentina, the young attacking midfielder attracted a number of Europe’s big hitters. A move to Portuguese side Benfica followed, where his form in a title-winning side alerted the mighty Real Madrid.

After capturing league, cup and Champions League winners’ medals in Madrid, Di Maria made a big-money but ultimately underwhelming move to Manchester United. After one season he left for PSG, where his role is not unlike the one he takes up for his country. Often moving and rotating positions across the pitch, he is a creator who is comfortable on both feet, providing consistently potent attacking deliveries into the penalty area.

Di Maria also has a good eye for goal, both from set-pieces and open play. Much like his captain, he prefers to shoot on his left, often cutting in from the right of midfield. But with Lionel Messi likely to set up camp on the right side, Di Maria will almost certainly be forced back to the left.

Lionel Messi
Forward, 30, Barcelona
Without question the greatest footballer of his generation, Messi (above) is a gift to world football. Having moved to Barcelona’s famed La Masia youth academy at an early age, he has spent his entire professional career with the Spanish giants, becoming a global superstar in the process.

Making his first-team debut at 16, Messi broke through into a line-up that often featured an already established superstar – Ronaldinho – on the left side. The young Argentinian thus found himself utilised more on the right – a move that came to define his career. His trademark ability to weave in and out of multiple defenders, and finish with deadly accuracy, has since become world-renowned. Often winning matches by himself, Messi – who turns 31 during the group stage in Russia – has inspired Barcelona to domestic and continental domination for a decade and more.

For Argentina, however, the trophy return has amounted to no more than an Under-20 World Cup win in 2005 and Olympic gold in Beijing three years later. After going down to Germany in the final four years ago, Messi looks more determined than ever to bring home the trophy from what could be his last World Cup.

A left-footed attacking wide player, Messi has sensational balance and acceleration, which enables him to beat even the most stable of defenders. He is also a wonderful passer, often seen cutting in from the right and sliding through balls that can penetrate even the most compact of defences. As a goalscorer extraordinaire who has no modern peer aside from possibly Cristiano Ronaldo, Messi blends incredible power with deadly accuracy. He is in every way the focal point of the Argentina attack.

Jorge Sampaoli, 58
Forced to retire from playing at the tender age of 19, Sampaoli has instead forged a successful career in coaching across his native South America. His most notable successes came in Chile, where he won three domestic titles with Universidad de Chile before, in 2015, leading the national side to an historic first ever Copa America. A brief spell in Spain followed with Sevilla, before he took charge of the Argentina national side in May 2017.

An intense character, Sampaoli prefers to employ attack-minded, high-pressing tactics to match. Constantly demanding high energy and work rate, it will be interesting to see whether he brings the pressing game he used so successfully with Chile to this Argentina squad.

With Chile, the 58-year-old (above) often utilised a 3-4-3 structure in which both wing-backs were encouraged to attack very high. The two wide players in his front three would frequently swap sides, while the central number nine looked to drop short and pull his marker away from their defensive structure. A similar tactic may work well for Argentina, allowing Messi to freely drift and rotate while the likes of Di Maria and Paulo Dybala attack in behind.

Defence
During Sampaoli’s tenure, Argentina have deployed both a back three and back four, often changing the structure from match to match. With the absence of first-choice goalkeeper Sergio Romero through injury, the coach has fresh defensive concerns going into their Group D opener against Iceland on June 16.

As a back three (above, left), Argentina do have effective wing-back options in Gabriel Mercado, Nicolas Tagliafico and the two-footed Cristian Ansaldi. The experienced Angel Di Maria could also be used here, particularly if Sampaoli is looking at squeezing every attacking option into his starting XI.

Sampaoli may elect to only include one central defensive midfielder in his line-up, even in front of a back four (above, right). The experienced Sevilla midfielder Ever Banega might be an ideal candidate for a lone central defensive shield in midfield, particularly as Javier Mascherano is now very much in the veteran stage and may struggle to consistently cover ground in these areas.

Attack
The seemingly eternal question when it comes to Argentina: what system gets the best out of Lionel Messi? As the tournaments have been and gone without a victory, debate has raged on.

Allowing Messi space to move inside into central areas and on to his left foot is the starting point. Ample rotation on the right side is key so the team can flow and adapt around Messi. Letting him drop short to create, building the attack from deep, will require similar rotation.

Utilising two defensive midfielders (above, left) means Argentina can ask one of them to provide extra defensive cover on their right side. This is essential to stop opponents overloading the right-back position filled by Pablo Zabaleta for so many years. The inclusion of two central strikers in this system may help pin back the opposing back line, allowing Messi to combine with fast and efficient one-twos.

Alternatively, Messi could play in a more central supporting role (above, right). A duo of Messi and Paulo Dybala could be an interesting central attacking approach behind a lone striker – Sergio Aguero or Gonzalo Higuain – with Dybala having more licence to get forward in support.

In this shape, Messi would have much more freedom to drift and roam, in a similar fashion to how Isco operates in the current Real Madrid midfield. From here, his vision – allied to penetrative runs from Di Maria on the left and Dybala centrally – could help unlock stubborn defences.

Squad depth
Argentina’s squad depth is impressive – but only at one end of the pitch. In attack, they are blessed with a whole host of talent and potential combinations. Sergio Aguero, Lionel Messi, Gonzalo Higuain and Paulo Dybala are all regular goalscorers for their respective clubs, while Messi and Dybala can also be classed as creators, often constructing chances within the central channel.

Further back is where the squad looks thin. With Fernando Gago out injured and question marks over the fitness of Lucas Biglia, Javier Mascherano – fast approaching 150 caps – may return to his former role in defensive midfield.

In central defence, Argentina only really have two genuine first-choice options. AS Roma’s Federico Fazio (above, right) and Nicolas Otamendi of Manchester City may both have struggled against the Liverpool Champions League machine, but both have had otherwise good seasons. If either picks up injury or suspension, there is limited cover in an ageing Mascherano or the inconsistent Marcos Rojo. This is a definite potential weakness that better opponents will look to exploit.