Preview
Under-pressure managers are largely dominating the narrative ahead of Gameweek 11 of the Premier League, which begins when Bournemouth host a Manchester United side whose manager Ole Gunnar Solskjaer is after a fourth successive victory following a difficult start to the season. His counterpart at Arsenal, Unai Emery, is similarly attempting to prove himself – his next opportunity to do so comes at home to Wolves on Saturday afternoon.

Also on Saturday, Steve Bruce and Ralph Hasenhüttl, respectively managers of relegation-threatened Newcastle and Southampton, are attempting to prepare their teams for respective trips to West Ham and Manchester City. Elsewhere, Sheffield United host Burnley, Norwich travel to Brighton and leaders Liverpool pursue their latest victory at the improving Aston Villa – all before Watford, still seeking their first, host Chelsea in the late kick-off.

On Sunday afternoon, Crystal Palace host Leicester in what is likely to be a competitive affair between two ambitious teams, before Everton welcome Tottenham in perhaps the most intriguing fixture of the whole weekend. The futures of Marco Silva and Mauricio Pochettino are as uncertain as any of their divisional rivals, to the extent that the outcome on Sunday could even make or break their next move.

That Kevin De Bruyne was rested when City won 3-1 against Southampton in the League Cup on Tuesday evening means he is likely to be returned to the starting XI when they host the same opponents just five days later. The visitors are expected to be organised into a 5-3-2 or 5-4-1 – and to operate in a low block and with a flat defensive line – to discourage City’s full-backs from overlapping. 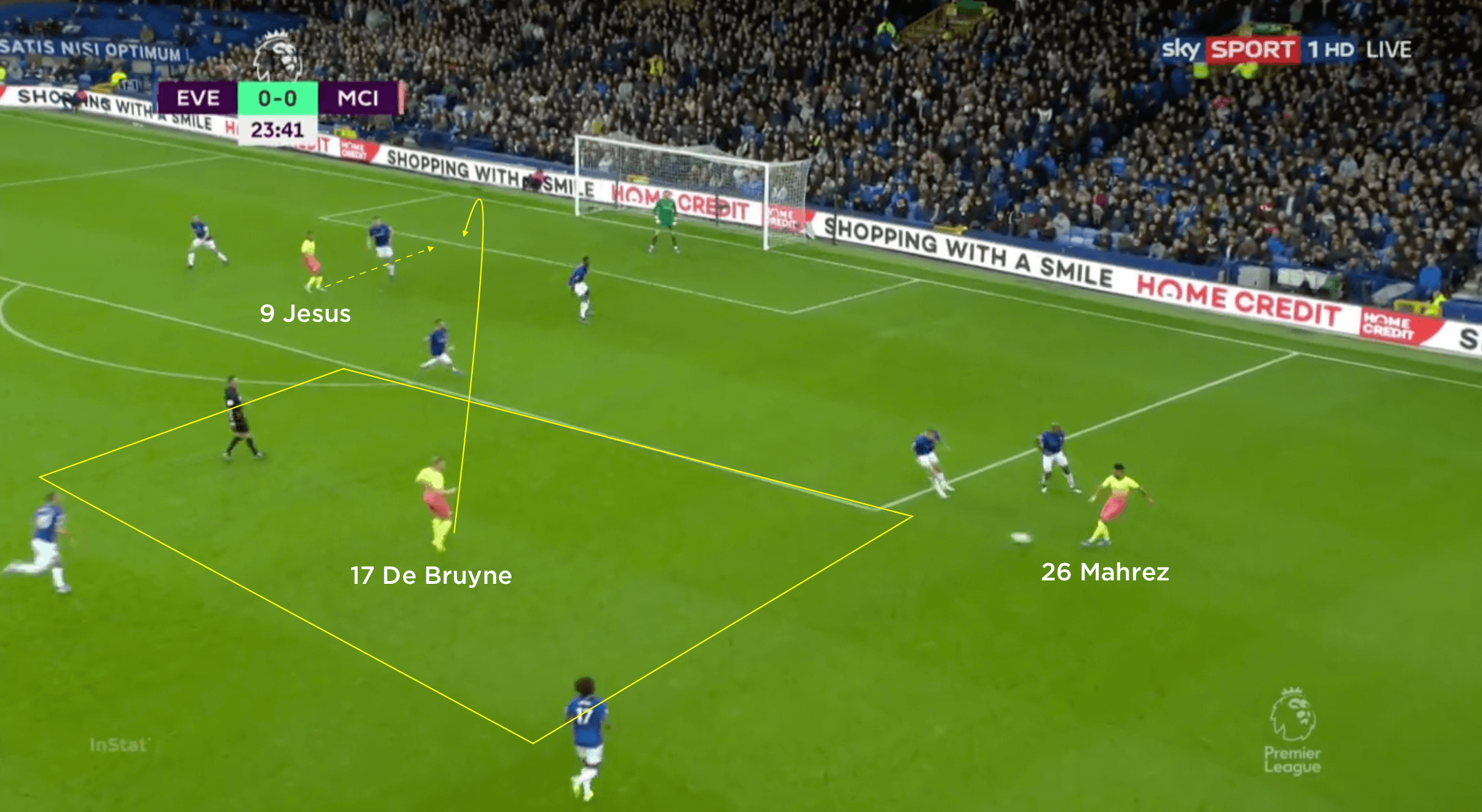 The £10.2m De Bruyne can therefore be particularly influential; Southampton’s narrow midfield will invite switches of play and, given City’s preference for using their attacking midfielders in half-spaces (above), switches to De Bruyne on the outside of midfield will lead to him playing crosses or shooting on goal. Even if a central defender advances towards him, he can play a teammate in behind that very defender.

The £4.6m Aaron Connolly’s two goals against Tottenham before the international football break demonstrated that he marries sound finishing ability with predatory instincts in the penalty area. His partnership with Neal Maupay in the 4-4-2 shape Graham Potter has been using is also likely to pose a threat during Brighton’s transitions against Norwich. 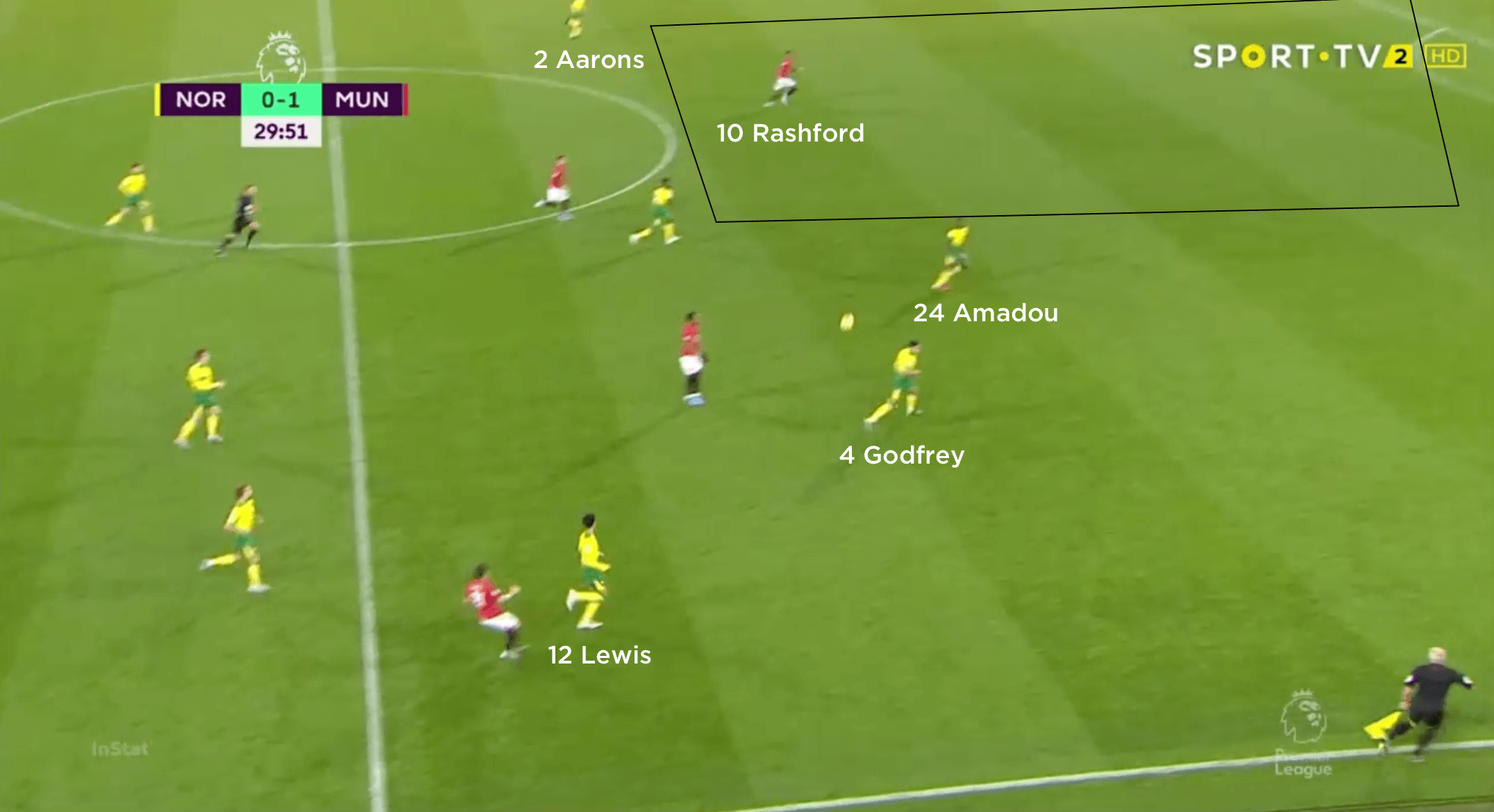 The visitors to the Amex Stadium this weekend use their full-backs in advanced positions, and generally also play with a high defensive line. This contributes to wide spaces in behind (above), which Connolly can exploit with penetrative runs to latch on to the type of early pass that will release him into the final third.

Watford are the only team yet to win a Premier League fixture this season. Quique Sánchez Flores’ return has seen them adopting a  5-3-2 formation (below), in which the use of three central defenders has improved their previously struggling defence. They have kept two clean sheets in their past three league fixtures, conceding only a controversial goal to Tottenham’s Dele Alli – but they will need to start taking their goalscoring chances if they are finally to secure a much-needed victory. 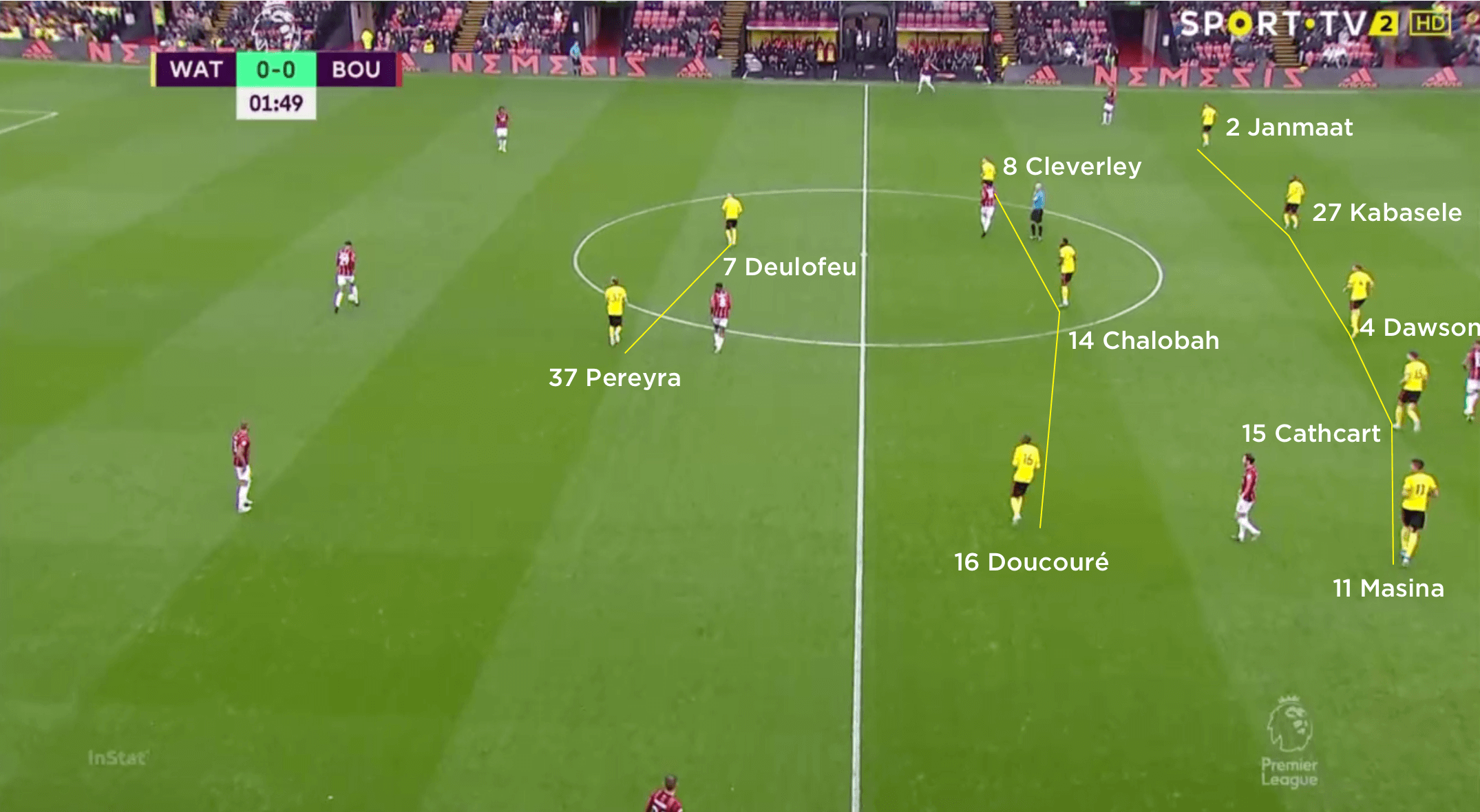 Chelsea represent difficult opposition on Saturday, but after Frank Lampard’s team they meet Norwich, Burnley and Southampton – games from which they will have to secure points if they wish to preserve their Premier League status.

Even if their attackers continue to struggle, Abdoulaye Doucouré (£5.7m) poses a goal threat, while wing-backs Daryl Janmaat (£4.3m) and José Holebas (£4.7m) contribute to an improving defence while offering potential assists in the final third. Now could be a good time to get in ahead of other fantasy managers with a pre-emptive purchase of at least one of them. 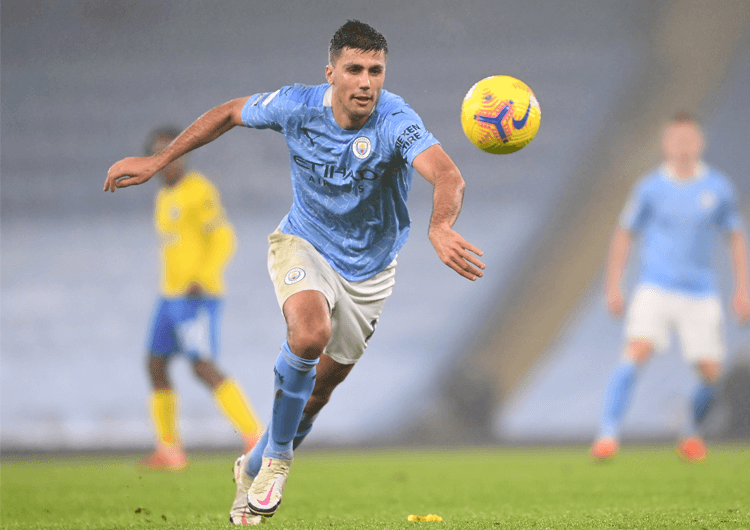 Rodri is repaying the faith shown in him by Manchester City, who broke their transfer record to sign him from Atlético Madrid in 2019. We assess his qualities 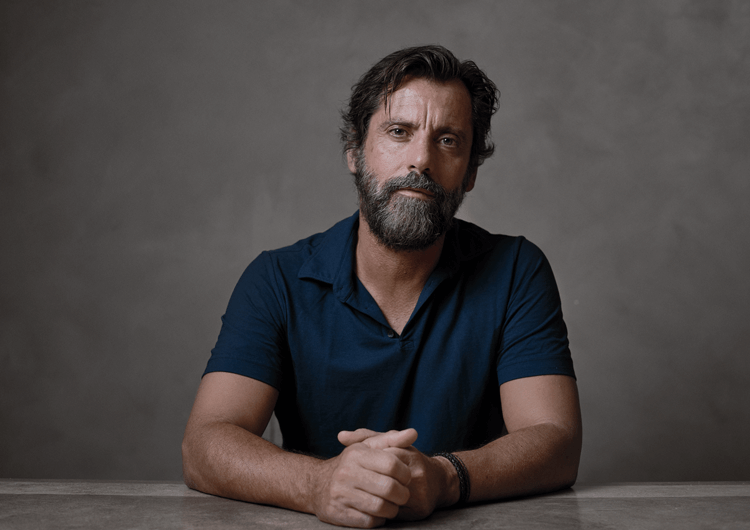 Quique Sánchez Flores revisits his first season in the Premier League with Watford, who in 2016 he led to the semi finals of the FA Cup