The return of the Premier League from Friday, when Liverpool host Norwich, means that fantasy football fans everywhere will be agonising over their team selections – ones potentially made more difficult towards the end of a summer in which Manchester City, Arsenal and Tottenham were among those to break their transfer records.

While so many new signings naturally excite, there remains no guarantee that they will prove good value for players of fantasy football; the time they may require to settle into English football may even make it safer to remain loyal to so many of those who performed so well throughout 2018/19. Experts at The Coaches’ Voice have compiled a list of 10 almost certain to excel, so make sure you are sitting comfortably and read on… 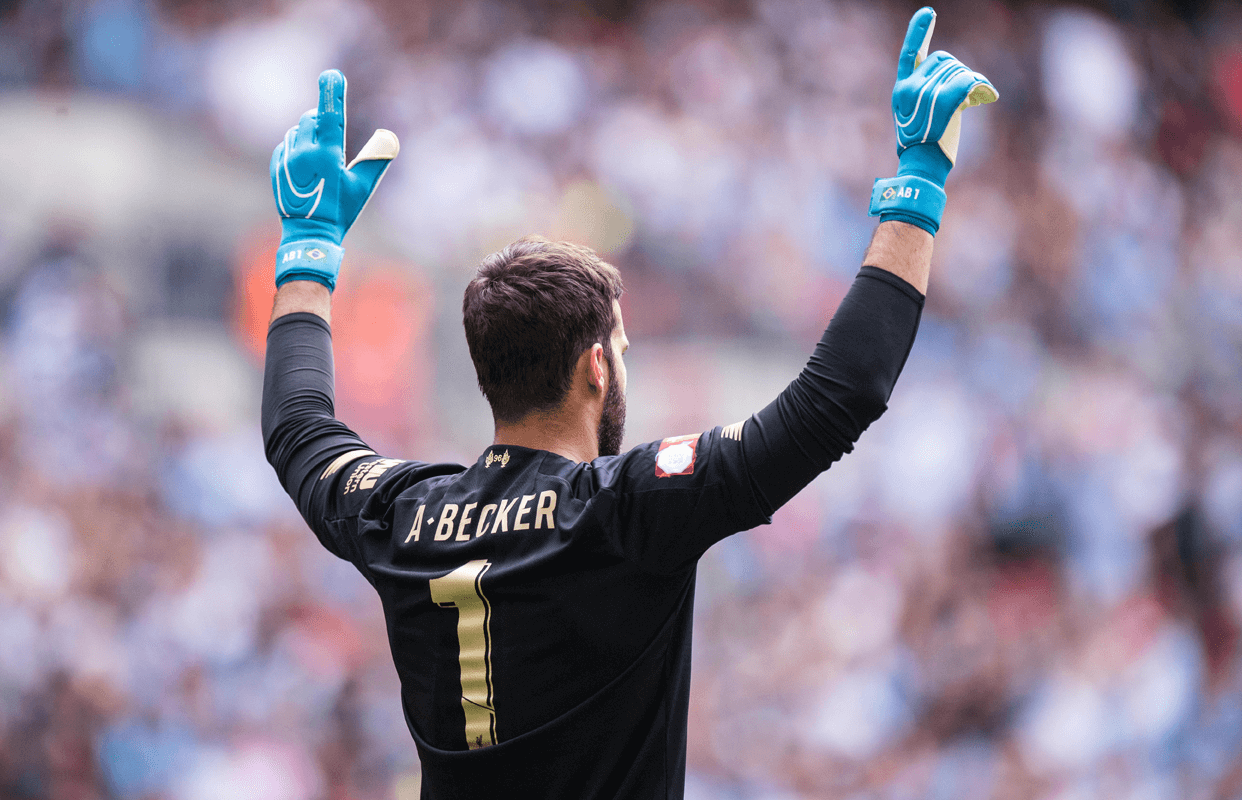 Alisson, Liverpool –  £6m
The most expensive goalkeeper alongside Manchester City’s Ederson, Alisson’s total of 21 clean sheets was the highest in the Premier League last season, and only three short of the record held by Petr Cech. The Brazilian (above) is the last line of protection behind a superbly well-organised defensive structure.

In picking out Alisson, however, it would be completely unjust to mention only the qualities of Virgil van Dijk and his fellow defenders. Liverpool defend from the front with the high-energy pressing of Sadio Mané, Mo Salah and Roberto Firmino, and the outstanding ability of their midfield three to cover the spaces between their front three and back four. Alisson is therefore a fine choice not only for his outstanding goalkeeping qualities, but also because of the organisation of the team in front of him. 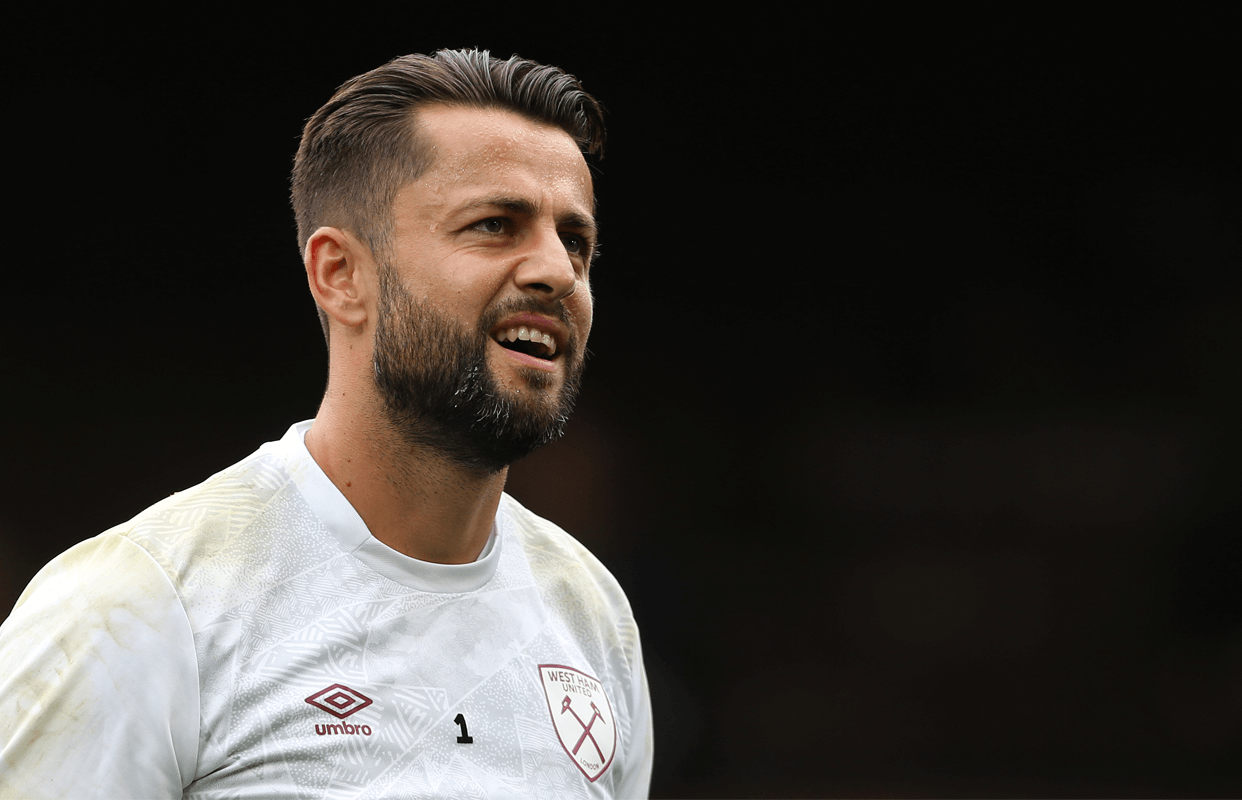 Lukasz Fabianski, West Ham – £5m
The West Ham goalkeeper was the fifth highest-scoring stopper last season, outscoring several high-profile rivals. West Ham managed only seven clean sheets, but Fabianski (above) regularly made multiple saves because of the shot-stopping qualities on which his reputation is built. Unsurprisingly, this resulted in numerous bonus points through the season.

It may yet prove worth making Fabianski a second gameweek signing, however. Manuel Pellegrini’s men face champions Manchester City on the opening weekend of the season. 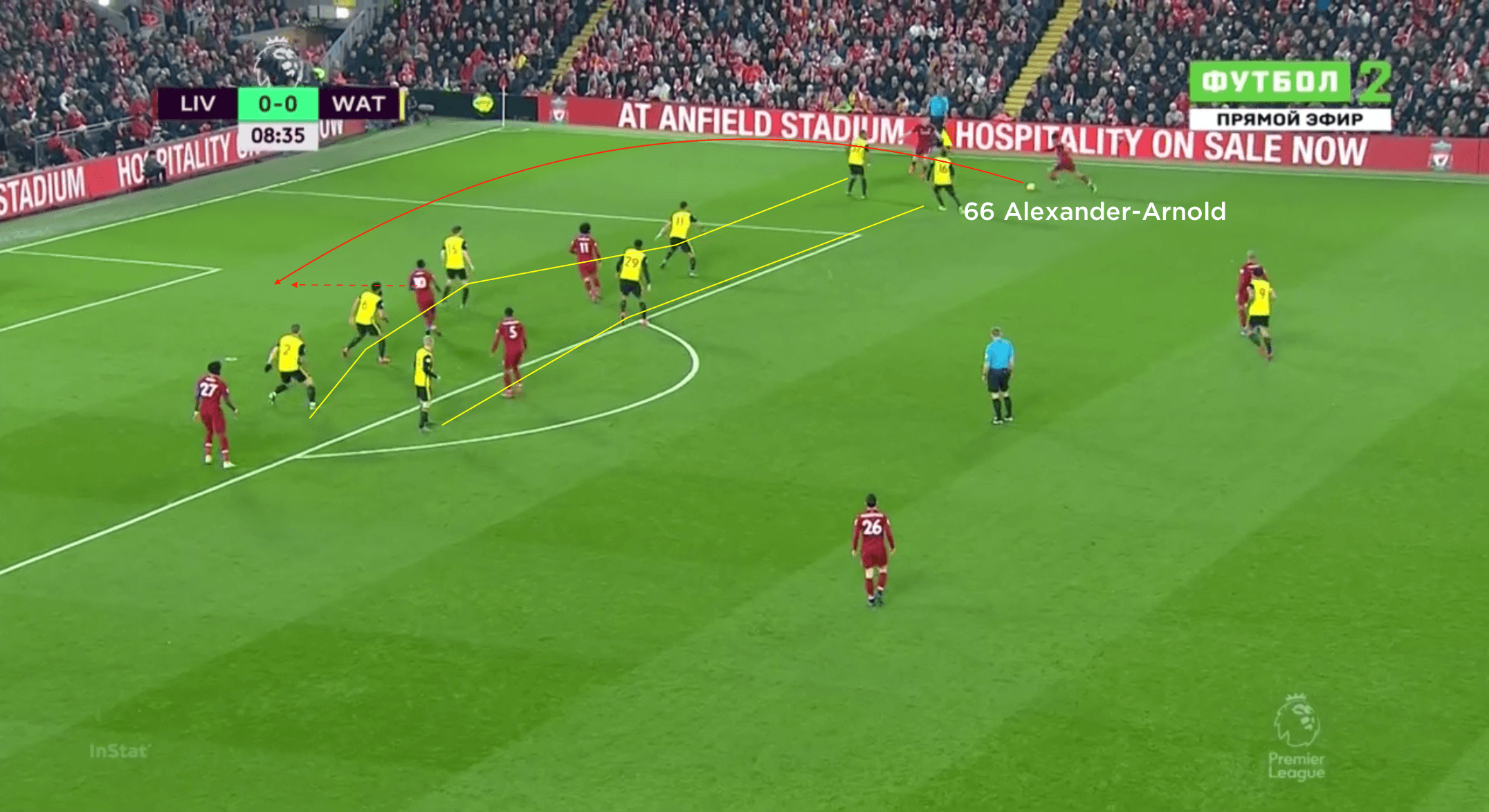 If the still-improving and increasingly attacking Alexander-Arnold plays more minutes this season, he is likely to outscore every other defender. From a tactical perspective, Liverpool are highly likely to find more teams defending deep against them this season, which will afford him more space in deeper areas to deliver his regularly precise crosses (above) into the final third. Mo Salah operating further inside will also encourage him to attack outside, further upfield. That could and should mean more fantasy points. 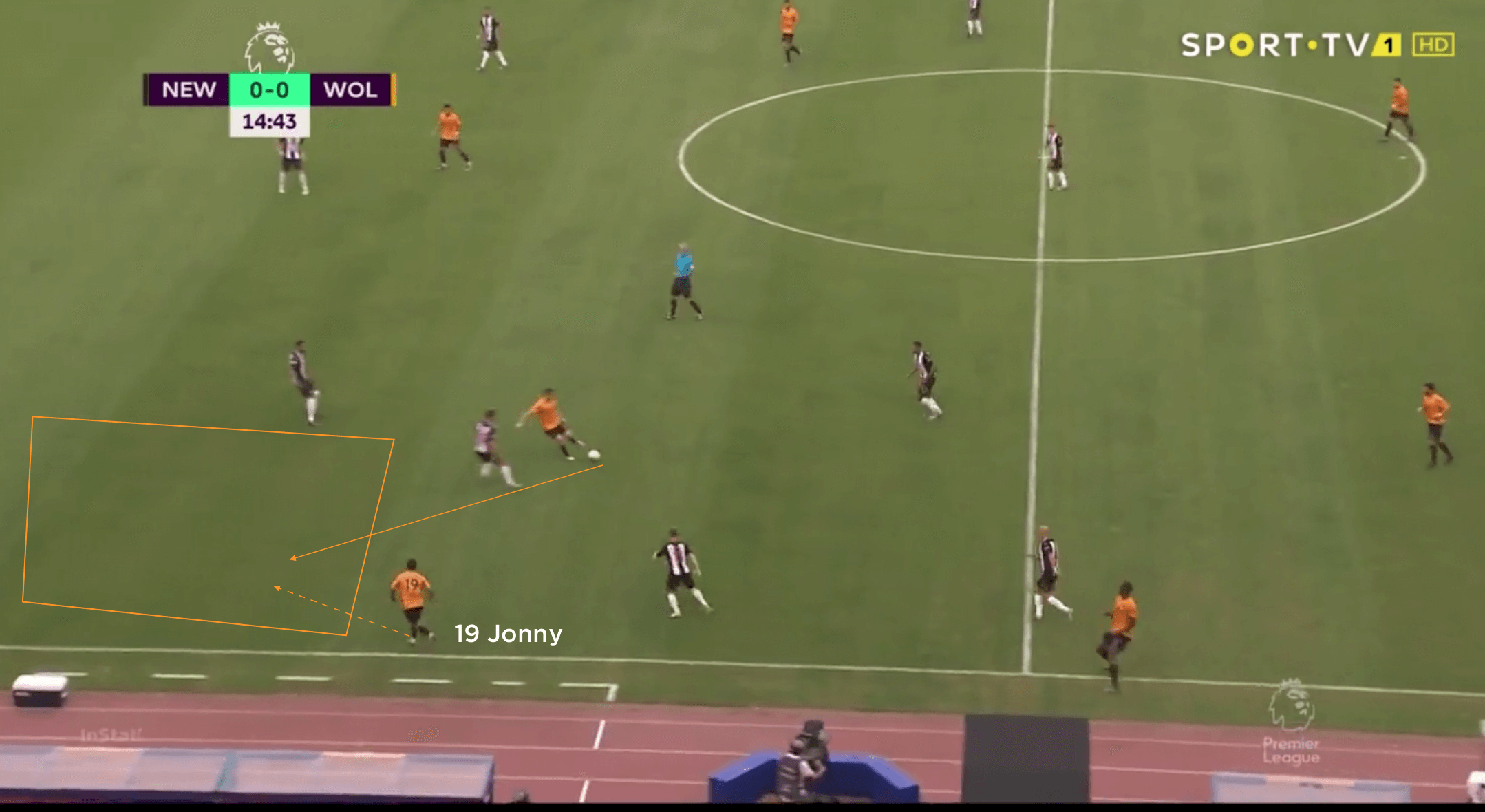 Jonny, Wolves – £5.5m
An influential player for a team that had a fine season, culminating in Europa League qualification. Their manager Nuno Espírito Santo favoured a 3-4-3 formation that featured Jonny (above) and Matt Doherty as wing-backs who dropped alongside a three-strong defence while defending and, when attacking, combined with classy midfielders João Moutinho and Rúben Neves.

In the recent Europa League victory over Crusaders, Wolves used a 3-5-2 – a structure that gives wing-backs further freedom and a greater number of opportunities to cross and run towards the far post, increasing their hopes of both scoring and creating goals. During 2018/19, Jonny contributed one goal, three assists, eight clean sheets and nine bonus points. There is every potential for him to improve on that this time round. 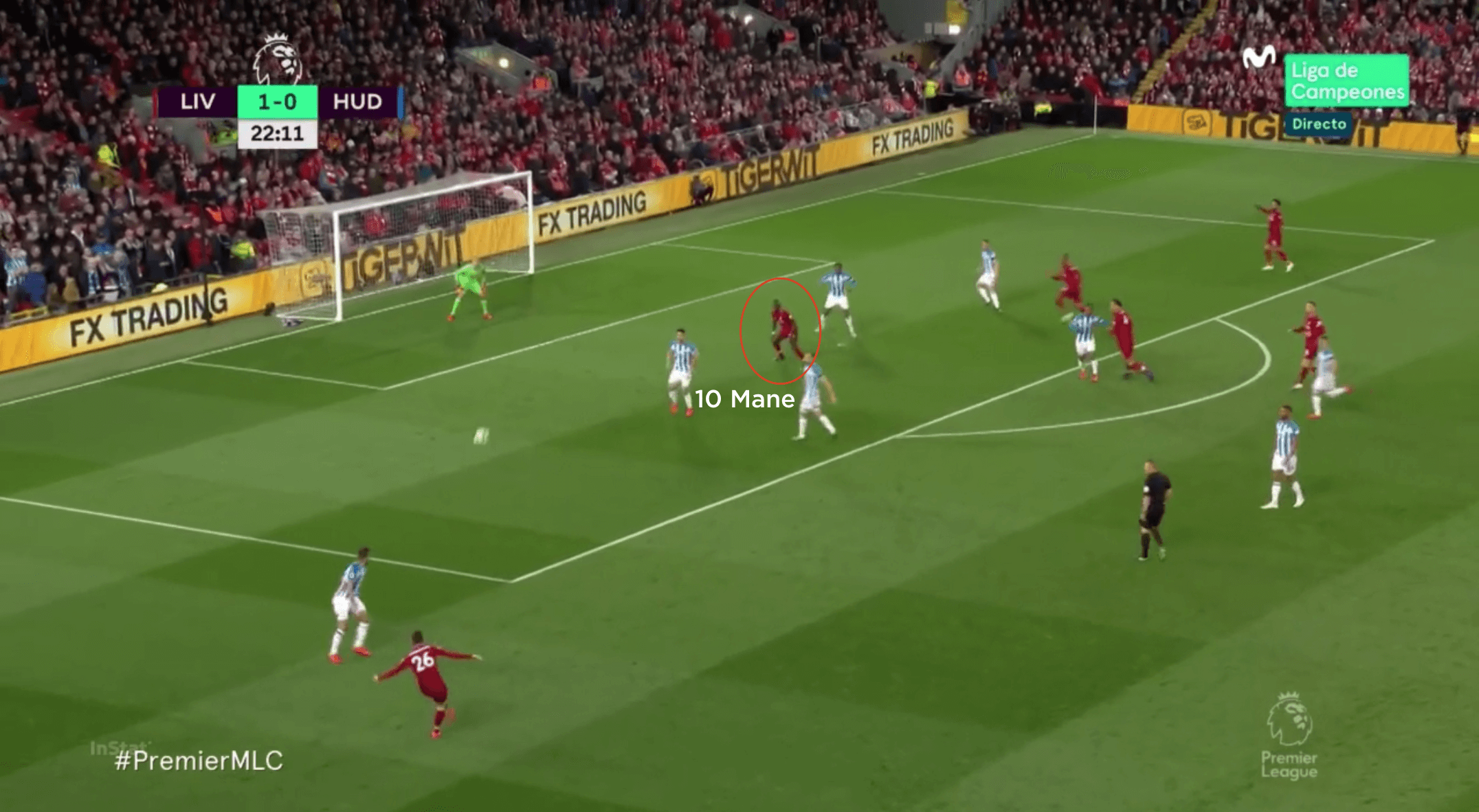 Sadio Mané, Liverpool – £11.5m
Like teammate Mo Salah, Mané shouldn’t really be considered a midfielder, but the Senegal captain had an outstanding 2018/19 from the left of Liverpool’s front three. The 231 points he amassed in Fantasy Prem owed much to his total of 22 Premier League goals, but that he is considered a midfielder means he is also awarded points when his team keeps clean sheets – and that team defends as well as any in Europe.

Mané’s runs in behind are a significant strength, to the extent that he doesn’t require much time or space to be so effective in the final third. He times his runs between defenders to position himself in the most threatening areas (above) to convert chances which, given Liverpool can expect to play against the deepest of defences, will prove particularly key. For this same reason, Salah is perhaps less likely to thrive. The desire to protect central areas will mean less space for the Egyptian to move inside and threaten in the way that he so often attempts. 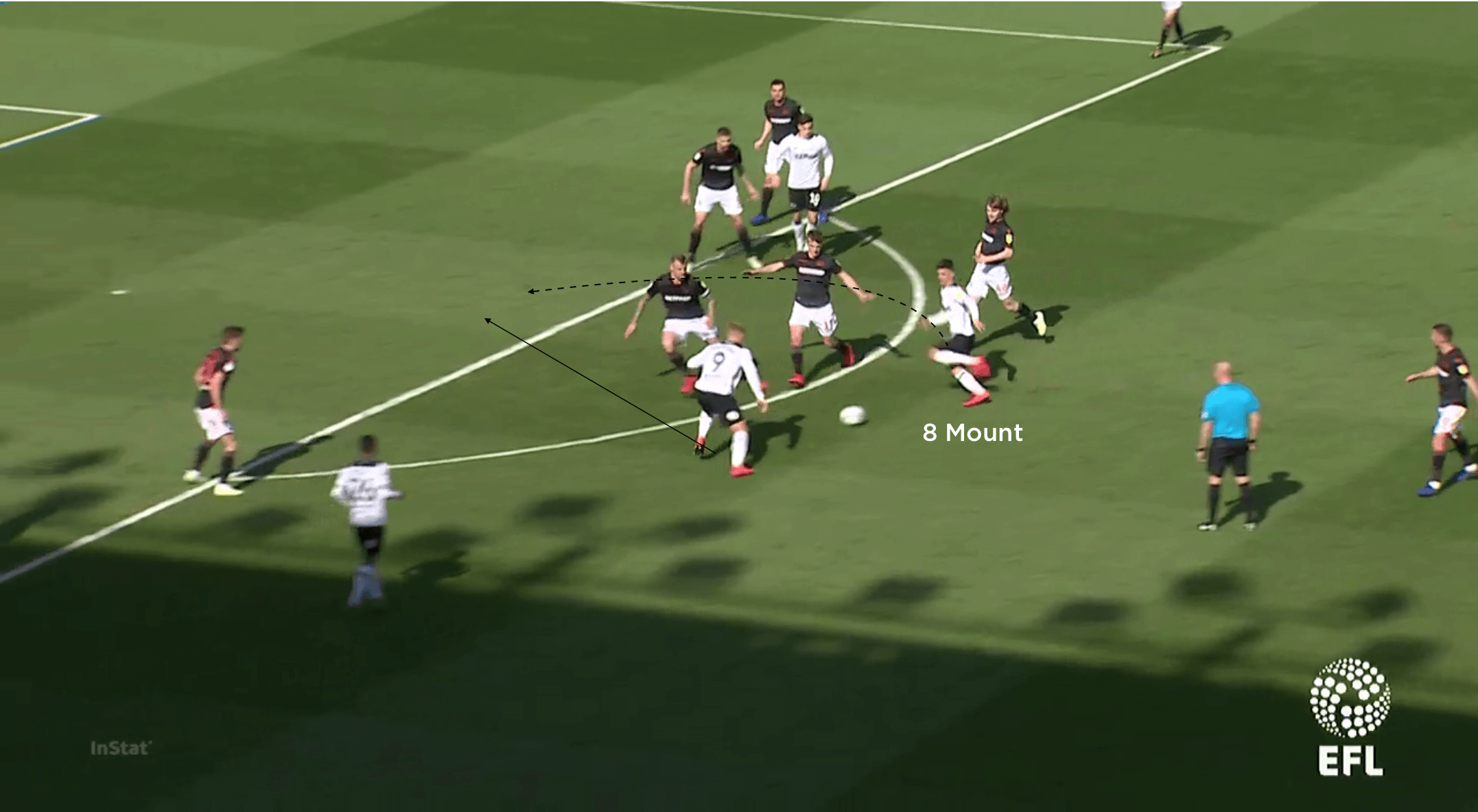 Mason Mount, Chelsea – £6m
With Chelsea unable to enter the transfer market and balancing their Premier League and Champions League ambitions, Mason Mount may be rewarded for a positive pre-season with first-team football. Chelsea manager Frank Lampard knows Mount from their time together at Derby, and this is expected to be the season when the club’s promising young players are finally used in the first XI.

Mount’s biggest strengths come in possession, when he is effective at lending the ball and timing his runs in behind from deeper midfield positions that are more difficult for opponents to track (above). If he makes the most of those strengths, he can excel under a manager who knows a thing or two about making exactly those runs. 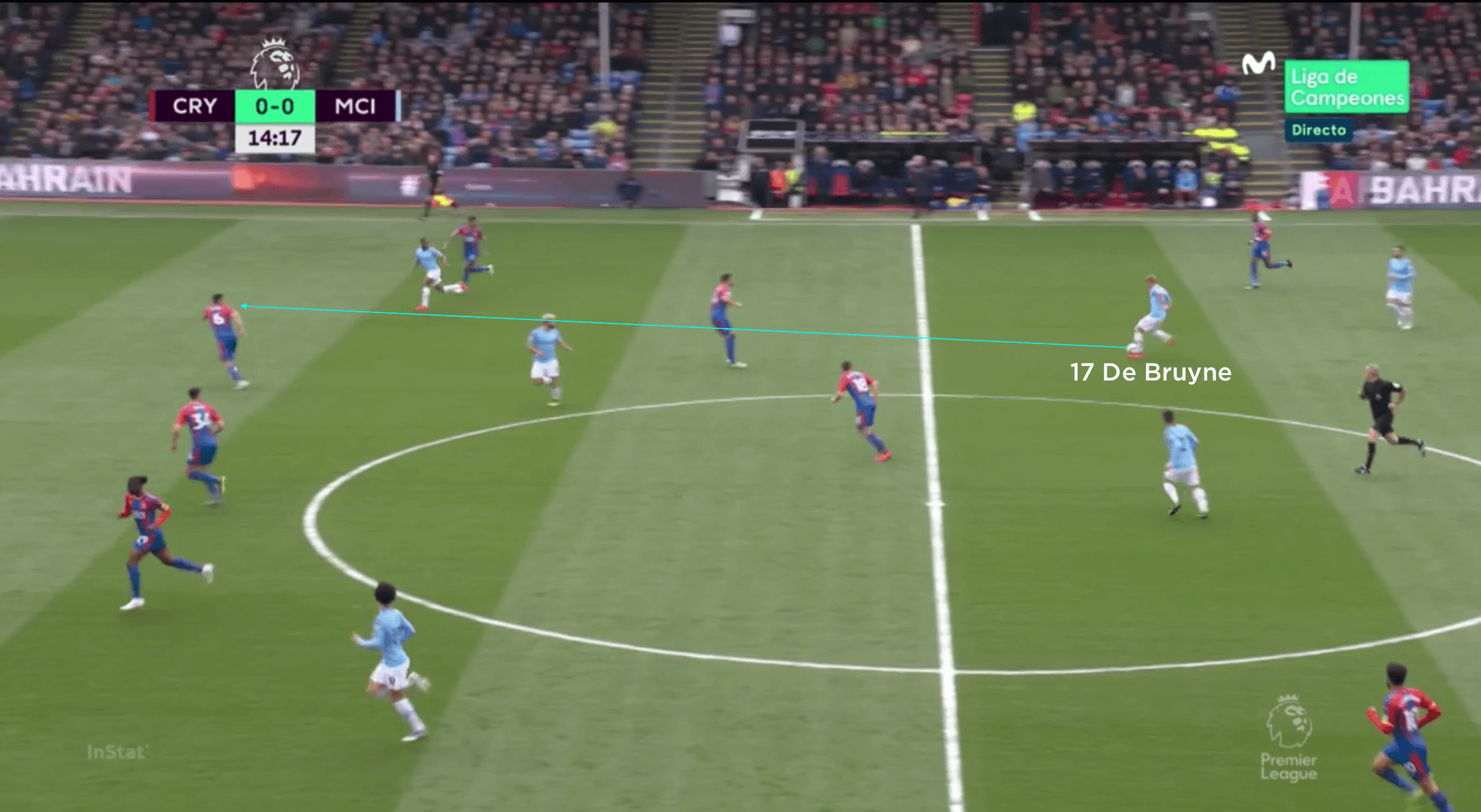 Kevin De Bruyne, Manchester City – £9.5m
After missing so much of last season through injury, Kevin De Bruyne has impressed throughout pre-season to the extent he looks ready to lead Manchester City’s defence of the Premier League title. With Pep Guardiola expected to retain his 4-1-4-1 structure, De Bruyne will occupy an attacking central position alongside any three of Bernardo Silva, Raheem Sterling, David Silva and Phil Foden.

De Bruyne demonstrated throughout last season’s FA Cup final victory over Watford what an outstanding player he remains, contributing as a significant threat in all phases of City’s attacks. He can unlock the most compact of defences with precise crosses and passes (above), score from distance, deliver from set-pieces, and he is deadly in transitions. He is also available at £9.5m – £2.5m cheaper than Raheem Sterling, and therefore providing exceptional quality at a relatively affordable price. 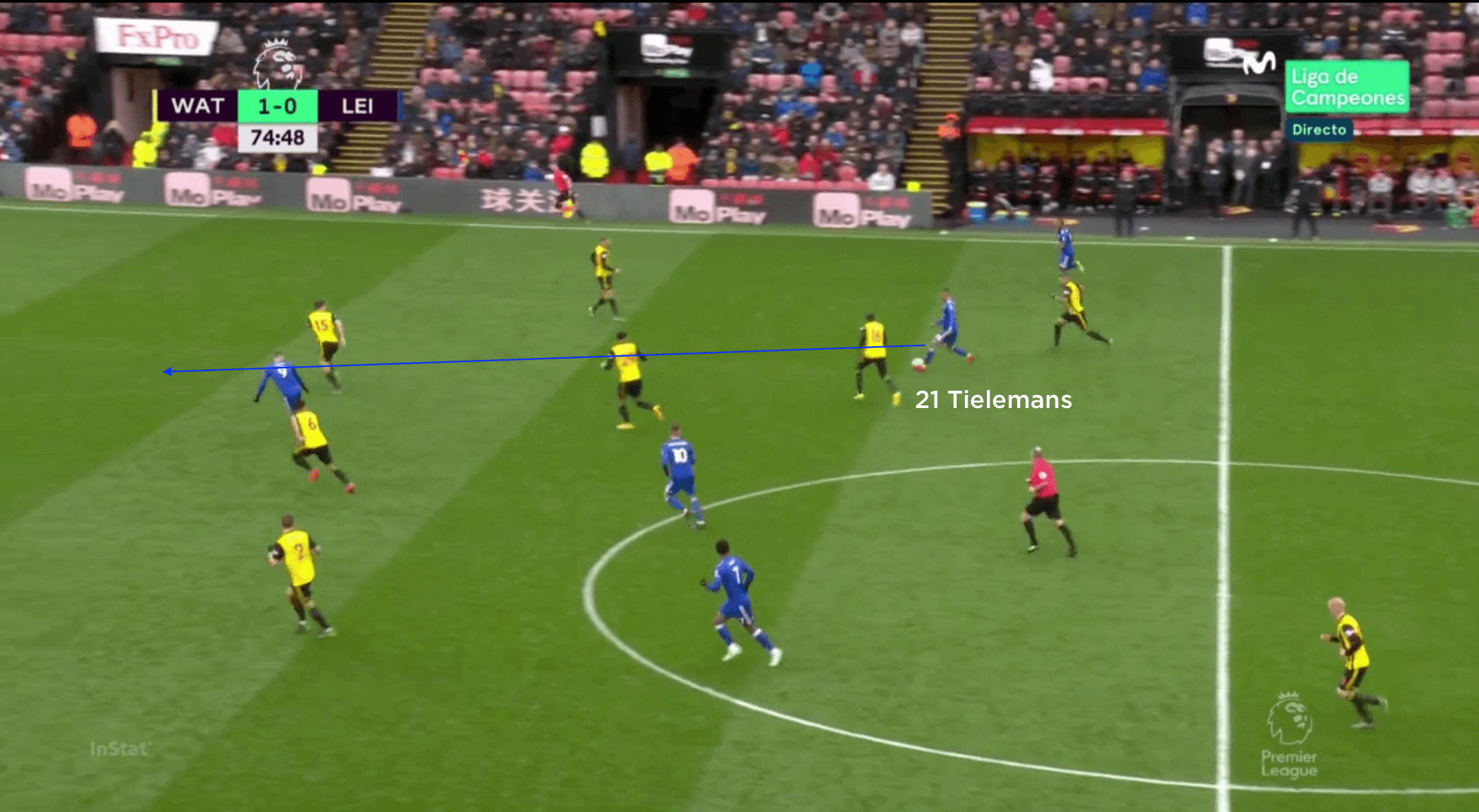 To put that into context, he had a better points-per-game ratio than Christian Eriksen (4.6 points), Richarlison (4.4) and Bernardo Silva (4.3), meaning only eight midfielders had a superior ratio – Mo Salah, Raheem Sterling and Sadio Mané prominent among them. Tielemans became known for his creative qualities from deep central positions (above), from where most of his assists originated. At £6.5m, he also is cheaper than, among others, Felipe Anderson, James Maddison and Wilfried Zaha. 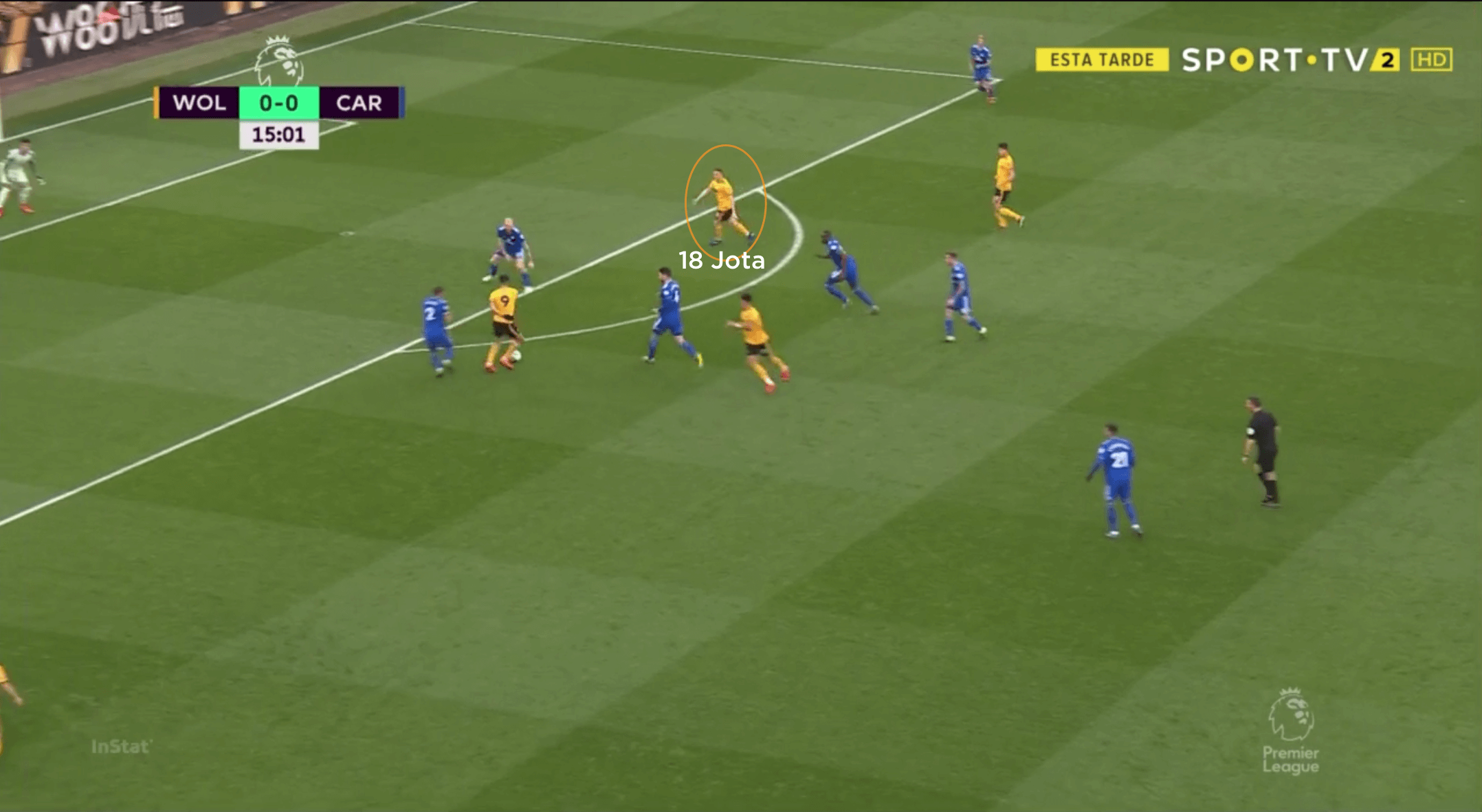 Diogo Jota, Wolves – £6.5m
A player who made a big impression with Wolves during 2018/19, Jota is again likely to partner Raul Jiménez as a second striker within Nuno Espírito Santo’s team. He has shown himself to be as dangerous in organised offensive phases as he is in transitions, and demonstrates intelligent movement (above), the pace required to evade opposition defences and the ability to finish with both feet.

It should not be overlooked that, with Wolves set to compete in Europe, there is a greater risk of fatigue, injury and loss of form. He will likely remain a threat, however, as he has already shown during pre-season and in qualification for the Europa League. 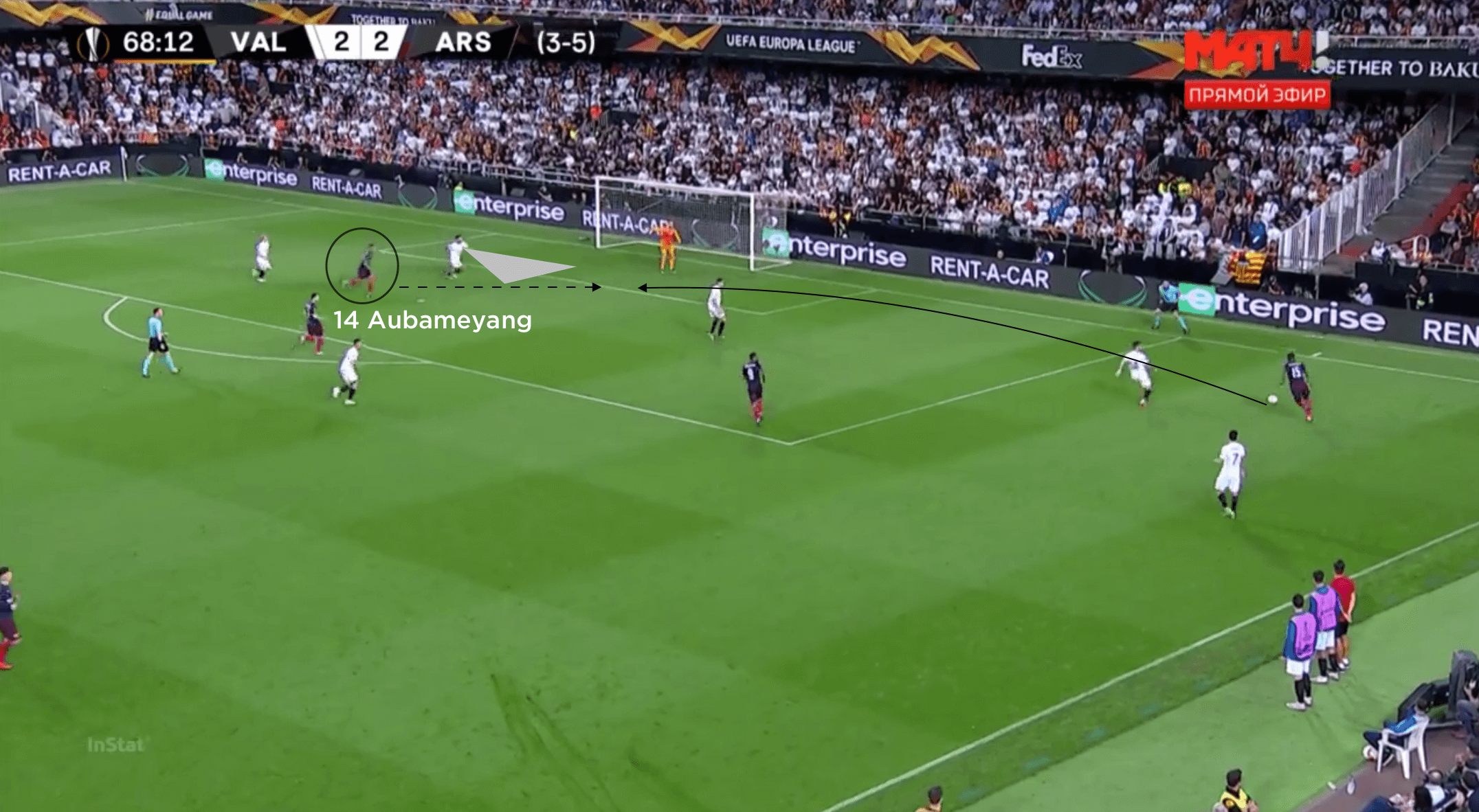 Pierre-Emerick Aubameyang, Arsenal – £11m
Alongside Sadio Mané and Mo Salah the joint-top Premier League goalscorer in 2018/19 with a total of 22, Pierre-Emerick Aubameyang may prove the best out-and-out striker in the league over the coming months. His strengths lie in the quality of his movements and his impressive pace; Aubameyang has a tendency to stay on his opponent’s blindside (above) to either make a run in behind that opponent or to ensure that he remains within range to use his speed to reach possession first.

Arsenal possess significant attacking potential, and Aubameyang is central to that; he is threatening in transitional moments and also demonstrates the intelligence to find spaces between compact opponents. Unlike some goalscoring rivals – Sergio Agüero among them – he is also less likely to be rotated through a long season. 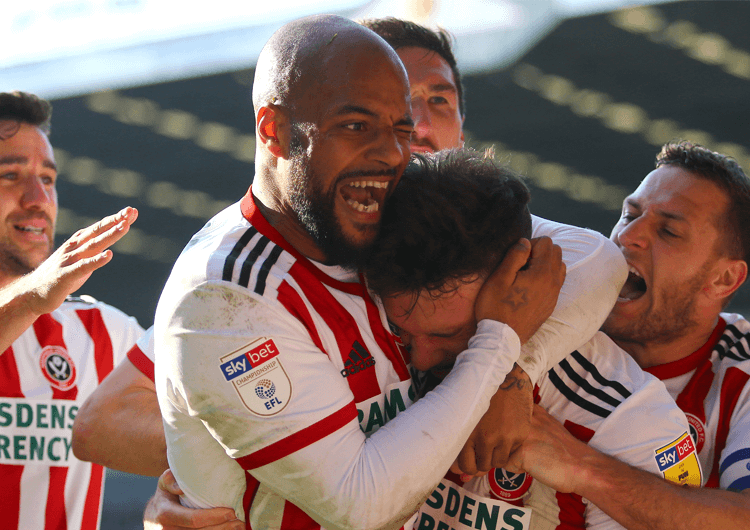 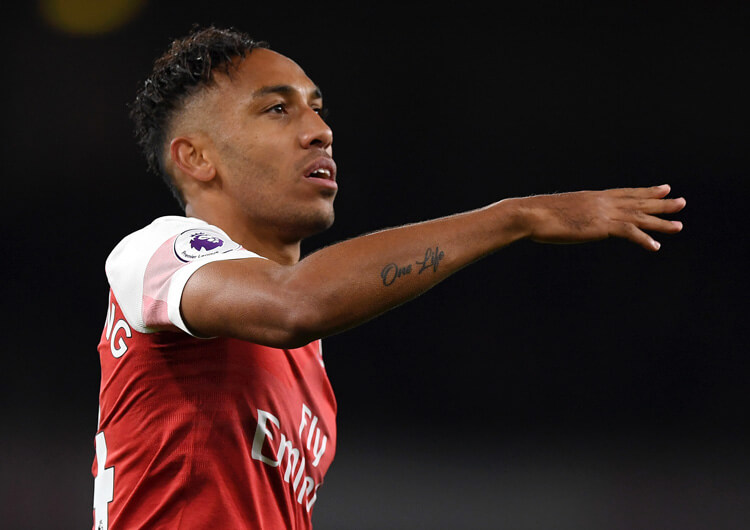 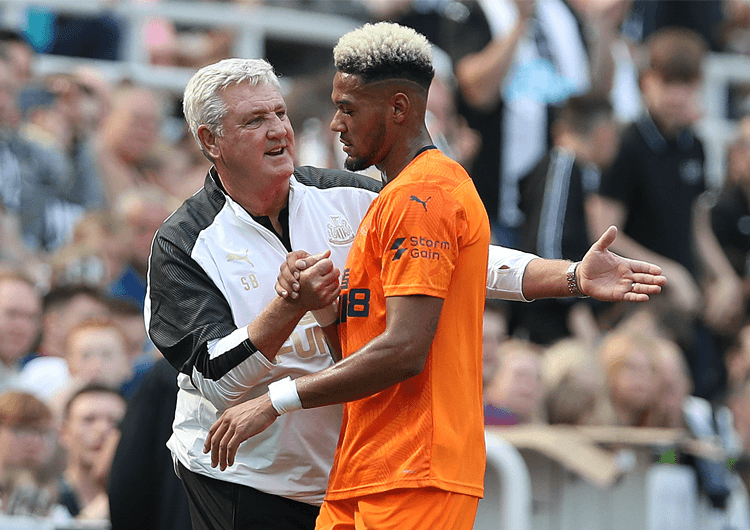