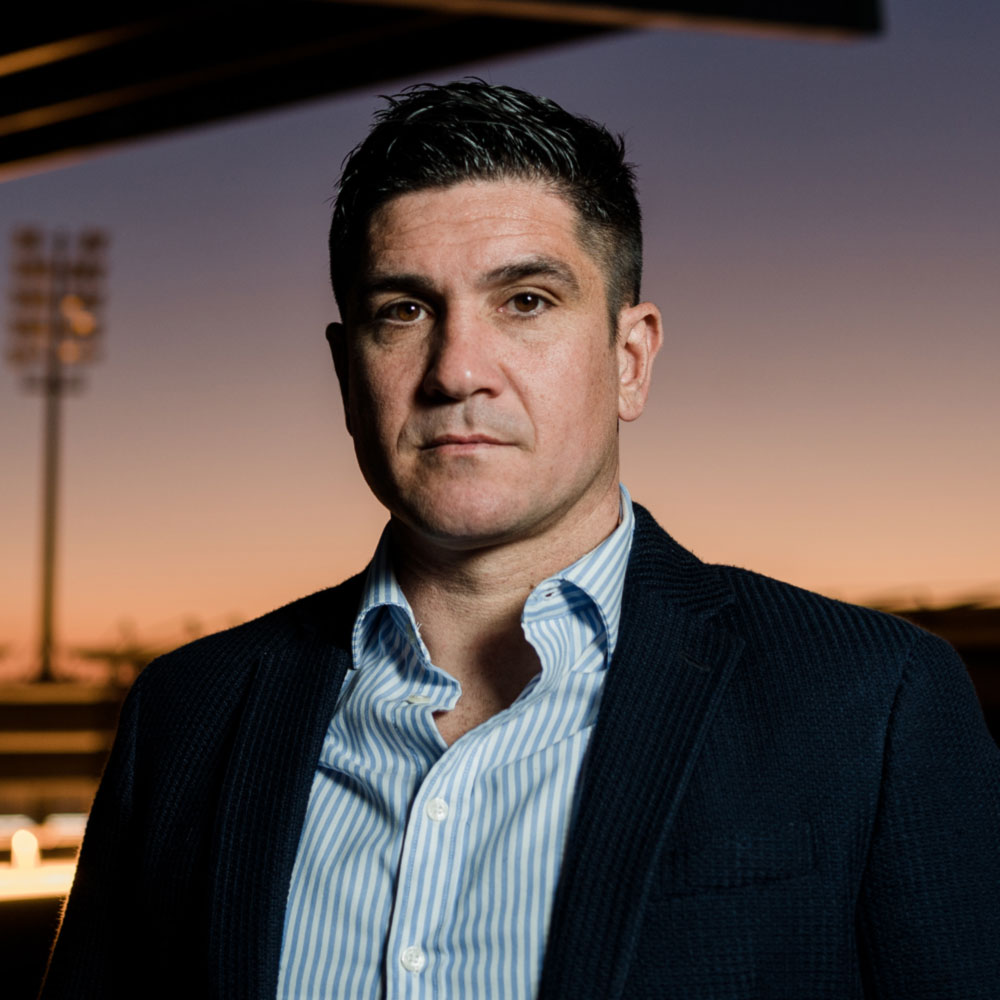 I was all set to sign for two more years with Dinamo Tbilisi when the call from Watford came at the end of 2020.

I was very comfortable in Georgia, where I had taken my first steps as a coach. I'd also won my first title there: the league. But I couldn’t let such an opportunity pass me by.

When I arrived at Watford, I had the same feelings I had when I was just 16 years old and left my hometown, Manacor, to join the Valencia academy. You can imagine how attractive it is for a coach to work in England and experience everything that surrounds football there: the fans, the stadiums, the atmosphere.

For me, there are two types of football: there is English football, and then there is football everywhere else.

But that should not take you away from your focus and responsibility. As a young player at Valencia, my objective had been to reach the first team – and I achieved that. At Watford, the challenge was to take them to the Premier League.

Of course, the first days were not easy. At Watford, it is usual for the coaches to be familiar faces to the fans. But now they had me: a coach unknown to most of them, and who had been a manager for only a short time.

That made them have doubts, and it was understandable. In football, experience is often used as a reason to justify a hiring. But what is experience? Is it 10 years of doing the same thing, even if you’re doing it badly?

To continually hit a wall, no matter how long you’ve been doing it, is not experience. For me, experience is in your day-to-day life, adapting to new situations.

It’s true that I had never coached a team in England, and that I had only been a manager for a short time. But I had had professional experience at the highest level as a player. When I first made it into the Valencia first team, I was in a dressing room with footballers who had played in two consecutive Champions League finals.

That experience is also important for being a coach.

Facing the doubts at Watford, we opted for something that never fails: hard work. And quickly, because the situation was tight if we wanted to get promoted. The margin of error we had in which to achieve it was almost zero. In other words, we couldn’t fail in anything.

I will always be very grateful to the Watford players for everything they did during that season, under such pressure. They did a spectacular job in understanding what I explained to them. It was about getting them out of their comfort zone, and from there admitting mistakes.

In football, you have to understand that there will be mistakes when you introduce new situations. But you shouldn’t stop because of them. In that group at Watford, the coach and the players respected each other when we made mistakes – because, of course, I also made mistakes. I also had to get out of my comfort zone.

That’s how we did it, and that’s how we succeeded. I was also aware that I had people with great abilities, and the game necessary to be pushed to their limits.

It is easier to achieve victories when you are consistent in the concepts you want to bring, though. You need to make the players understand what you are asking them to do, and what you want in the relationship between everybody.

"suddenly, i found myself in the middle of a huge crowd of fans – i really enjoyed it"

During my journey in England, I also felt the support of many people from outside. One of them, above all, was Rafa Benítez (below). He advised me on my arrival in the Championship, a competition in which Rafa had been a short time before with Newcastle – and from which he too had eventually won promotion.

Rafa wrote to me quite often: “Don’t let up now, keep pushing, because the Championship is very treacherous.”

On his birthday, I called him to congratulate him. The first thing he spoke to me about was my next match.

That makes you realise how Rafa lives and feels his profession, and that’s why it was so good to have his advice. He had lived that experience in the Championship, and many more as a coach, but our relationship went back further than that.

I had had Rafa as a coach at Valencia. He was a coach who always gave you a reason for every situation. We are talking about the early 2000s here – this was a time when the vast majority of coaches still didn’t give you reasons.

With Rafa, there was no room for improvisation. Everything responded to a plan to achieve a specific goal: to get a good result, and to get the best individual performance from each player.

From the first day I arrived at Valencia until the last, Rafa wanted me to be better. Personally, professionally, tactically, physically. It was no different when I arrived in the Championship with Watford. He wanted me to be the best coach I could be.

Once I had got over those initial doubts at Watford, it was incredible how much the people showed me their love. It gave me the strength to work, day by day, to achieve the goal of promotion.

In that relationship with the fans, there is one day that is unforgettable for me. I used to go for a walk every day, near where I lived – there was a terrace of bars not far away. Suddenly, and before I had a chance to change my route, a group of fans realised I was there. They crowded around me, to greet me and congratulate me. I found myself in the middle of a huge crowd of fans. I blushed, because I don’t really like the limelight – but I really enjoyed it.

That season in the Championship, we couldn’t have them in the stands because of the pandemic. I was finally able to experience that feeling of having them there in the Premier League – and believe me, it is amazing!

You could close your eyes and you would know exactly where the ball was because of the sound of the fans in each moment of play. It is a very beautiful thing to be able to interpret football just by listening to the voices of the fans. That only happens in England.

The bad thing was the end. Not so much that I left; as a coach you must know that, one day, you will have to go through it. More, the way it happened. It caught me by surprise. We were okay in the table, with the points I had more or less in my head to achieve our goal of staying up.

“We think the team is going downhill.”

That was the club’s explanation in making their decision. I couldn’t understand it.

"after leaving watford, i sought to disconnect from football. that lasted two weeks"

I think you can talk to a coach about something that is going badly or not being achieved, but not about something that hasn’t yet happened. I couldn’t discuss what was going to happen in a month’s time. So I got up from the table and gave a hug to the sporting director, Cristiano Giaretta, who I will always appreciate. That was the end of my Watford adventure.

When we told the players afterwards, they didn’t expect it either.

One of the things I worry about most is having a good relationship with my players, and I think the relationship between coach and players is always complex at the beginning. You are a new voice asking them to do something new – and that can be difficult.

But once everyone gets it and you move forward, the relationship works. You thank the person who pushed you and made demands – the person who didn’t let you stay in that comfort zone we talked about before. Football players are not stupid. They appreciate that.

Despite the difficult ending at Watford, I will always be grateful to the people and for the strong relationship I had with them. I enjoyed every day at a club I fought for and defended as if it was my own – and I did it in a unique country, where football is loved in a different way.

With all those feelings still in my head after I left, I sought to disconnect from football completely. I didn’t want to know anything about matches or teams. Nothing at all, I told my agents.

That lasted two weeks. I started to ask myself questions. What can I improve on? How can I transmit better? Should I look for different ways of working, maybe opt for other solutions?

"huesca was an opportunity to move forward. A good coach is not made by staying at home"

English football, and especially the Premier League, had squeezed the most out of me. Tactically, it’s an incredible competition, where you have to change your plan several times during a game.

You could come out with one way of pressing, and after five minutes the opposing team would detect it and change their build-up. So you have to change the way you press.

Then, after 25 minutes, they would revert to the same build-up they had at the beginning, and you have to change again. And so it goes on.

It wasn’t enough to stick to what you had prepared during the week. You had to try to offer new situations to players during the game, and new ideas too. But always in an organised way. It is not enough to transmit only your energy and desire to the players.

This was something else I learned playing for Rafa Benítez. Before working with him, I was a striker who didn’t stop running during matches, pressing from one side to the other. Rafa gave me order, a way of playing and understanding the game to get the best performance out of me. This is a lesson that, as a coach, I now try to apply to my players.

In the third week of my holiday after Watford, the opportunity arose to coach Huesca in Spain. I was exchanging the spotlight of the Premier League for the Spanish second division – but I didn’t even have to think about it.

Coaching is what I love. It’s in me. And working is the only way to keep improving. Huesca represented an opportunity to move forward, just as Watford had done.

A good coach is not made staying at home.