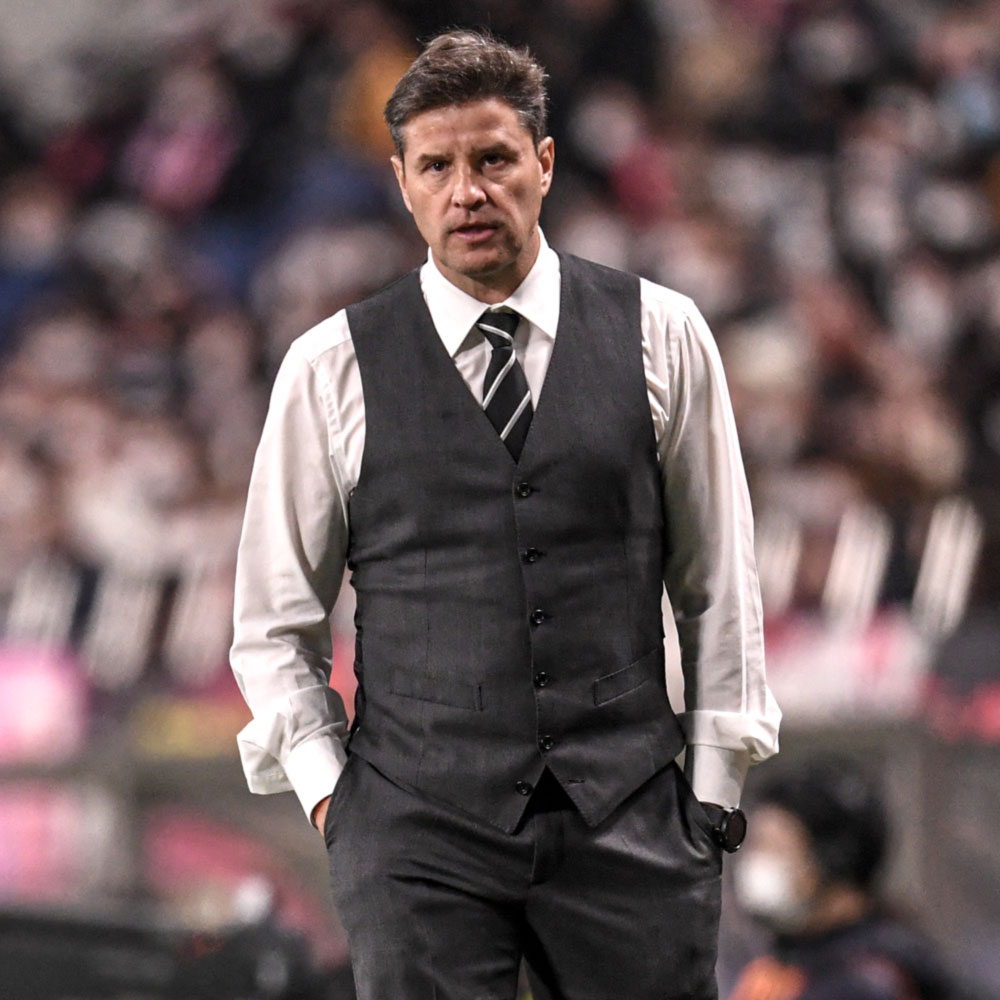 I was in my thirties and had two children, but I was living like a teenager.

I was in London, where I went to learn English and to watch English football after leaving Málaga in the summer of 2010. There, I had been assistant coach to Juan Muñiz and then sporting director.

At times in London, I was living in rented accommodation. At others, I was sharing rooms with people from different cities or different countries. Now I look back and I say to myself: “These are sacrifices and all that time was worth it.”

I am sure of that. Without that step, everything that came afterwards would not have happened – and I would not have had the opportunity to work in Japan. That’s why, if I can give you one piece of advice, mastering more than one language is very important for a coach. Especially English: it helps you to open borders.

Those borders in Japan started to open up in my last few weeks in Thailand, where I had been since early 2014. After three years coaching some of the country’s top teams, I spoke to my agent about developing a presentation about my work. I wanted to target the Japanese market.

I had played some games against Japanese teams during my time in Thailand, and also taken part in a coaching campus there. To live that experience was something I really wanted.

In my presentation, I wanted to reflect my approach to football. It is based on positional play, on being quite proactive, executing a high press – and with the boldness of being able to work with young players. In short, I wanted it to reflect, as much as possible, what my football idea would be if I had a team.

Once the presentation was finished, my agent started to circulate it. A few months before the start of the 2017 season, a club showed interest in me: Tokushima Vortis. At the time they were playing in the Japanese second division. Internationally, they were unknown to most people, but I felt it would be a great place to work.

Once the talks started, the club asked for a report on the team. To do so, they invited me to Japan to watch one of their games live. We took the opportunity to get to know each other personally because, for them, simply sending a CV was not enough. They needed to feel what the person was like. Personality is extremely important in Japanese culture.

Once the whole process was over, the Tokushima board told me that they had chosen me. From then on, I would not leave the city. I stayed to watch their final league games and to start preparing for the pre-season.

What happened on my first day of work with the players is the kind of thing that sticks with you forever. The club’s sporting management obviously knew about my ideas – that’s why they hired me. But the players didn’t.

Before starting work, I showed them a short video with the ideas I wanted to develop. It included images that I had collected myself from my previous teams, and others in which the idea of the game was very clear.

The response from the players was one of tremendous surprise.

“We like it, coach,” they told me. “We like this better than defending most of the time and sometimes scoring from a set-piece or a counter-attack.”

The journalists following the team were perhaps even more surprised. After that first training session, they kept asking me questions. They were shocked that there wasn’t just running or strength work, as usual. Now, the ball was the main protagonist.

"you have to trust what you are doing. if you have doubts, you can lose the players"

This culture of change in the game was gradually transferred to the pitch. Not without considerable effort, but always with the desire of the players to develop that style. In the first year, Tokushima became a team that subdued the opposition a lot. We generated many scoring chances, but we sometimes struggled to beat teams that defended very deep.

I remember one game against Kamatamare Sanuki. We had 21 chances. Three hit the woodwork, but they scored a goal in the dying minutes and we lost. That game reflected, 100 per cent, what happened to us in that first season.

The following day, we played a friendly match against the same team, in which the substitutes took part. After the game, Sanuki’s coach came up to me and told me that they had beaten us by a miracle. “Normally, if you keep playing like that, you'll end up winning."

Even if things didn’t quite work out in that first period, I had no doubt that we were on the right track. Resuts are very important for coaches, this much is clear, but it should not make us forget our path. You have to trust what you are doing and not have doubts because, if you doubt, you can lose the players. Inevitably, they will also then have doubts about your idea of the game.

So you double the bet and go on. I’ve always had that conviction, but I think triathlon has helped me to be much stronger.

I started doing it almost three years ago. I have run and cycled all my life, but then I added swimming to that. In Tokushima, almost every  afternoon I would get in my car and go swimming at the beach. It didn’t matter what the temperature was. I would put on my wetsuit and swim a couple of kilometres in the sea. Then, when I came back to the club, I was cool enough to keep working long hours and stay focused on the job.

"the most gratifying thing was that urawa called me. i didn't need to explain what i wanted"

When I moved to coach Urawa Red Diamonds in Saitama, I missed the sea. I had to swap it for the swimming pool, but it’s not the same because it’s much more crowded. However, I still do several hours of sport every day and now my challenge, if time allows me, is to participate in a triathlon soon.

Triathlon has also given me something else very important. Being away from football for a few hours and focusing on training helps me to find new ideas or solutions to problems. In short, to see things more clearly.

That’s what we achieved in the seasons that followed with Tokushima – to see things more clearly. It was good to maintain our idea of being a team that dominated with the ball, but we also realised that we had to evolve our game.

It wasn’t just about subduing the opposition and crushing them in their area to win. We also needed to play out from the back, draw them in with our goalkeeper and defensive line, get them out of their half and create space to attack.

Over time, we were able to combine both approaches. We became a more unpredictable team for our opponents, which enabled us to win more games.

By the fourth year, the team had our ideas very well assimilated. It helped that many players had been with the team for a long time, allowing us to develop what we wanted. It was a very good year in which we won a lot of games, including a lot of away wins. In the end, that led us to promotion.

That success brought me to Urawa, but this time the recruitment was totally different from when I signed for Tokushima. The most gratifying thing was that they called me. I didn’t need to explain to the club what I wanted to do, as I had done in 2017. This time, Urawa came to me because of the style of football and the idea of the game I want to develop.

It was an opportunity that presented itself as a great challenge – not just because of the magnitude of the club in Japan, but also because of the complex situation the team was going through.

I was sure that I could change their style of play, however. We would be able to return to the bold and dynamic football with which Urawa have always been identified.

From the beginning, we all came together to achieve it. We fought to achieve our goals, and in 2021 we won the Emperor’s Cup to qualify for the Asian Champions League. It was a collective success that led to individual recognition: I was named coach of the year in Japan in 2021.

It was something I didn’t expect. It's not easy to get that recognition when you coach in a foreign country and you don’t win the league or finish in the top places. We finished sixth, but my colleagues appreciated the process of change in Urawa. That helps you understand how Japanese culture thinks about processes. They trust them and value them.

In Japan, I have been fortunate to change the way my teams play the game – but Japan and its culture have also changed me. I am a calmer coach than I was when I was in Spain – not to mention the Ricardo who lived like a teenager in England!

The passion is still the same as ever but, thanks to that calmness, I feel more prepared to face any challenge that may come my way.