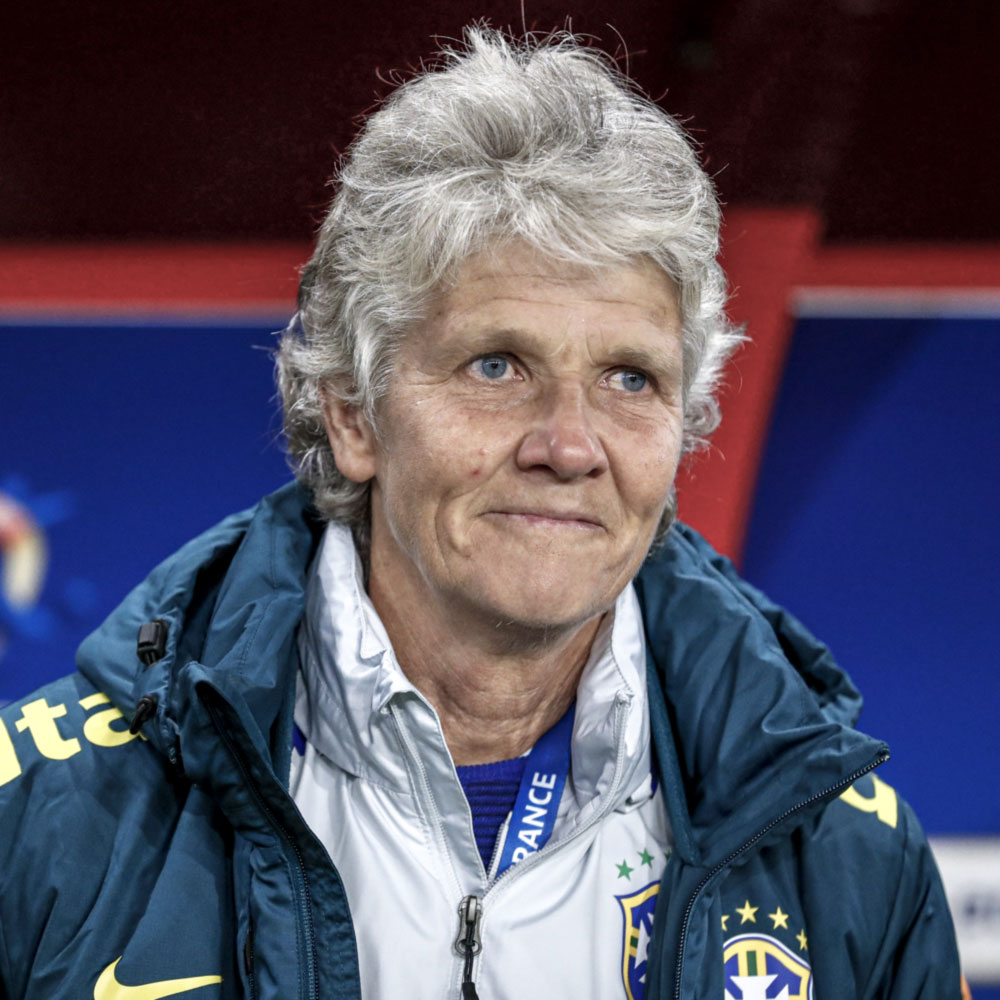 I wanted to be a boy.

That is what I thought in my early childhood. And the reason was simple: I thought that only boys could play football. So, I wanted to be a boy too. It is crazy, isn’t it?

Two things made me what I am today: my family and football. That is how important it is in my life. Every coach I’ve had, every changing room I’ve been a part of – all of this has built the person I have become.

During my childhood, Swedish girls liked to play with a ball – but they preferred to use their hands, and the boys played with their feet. For me, there was no doubt about where I wanted to be. Fortunately, my school respected my wishes. During sports time, I played football with the boys.

The problem was that, on Sundays, the boys used to go to a club to play in a league. There, because I was a girl, my presence was forbidden. Luckily, the coach of the team called me for a private conversation.

“Do you want to play a real match, with a referee, kits, goals and everything else?” he asked.

I think that was the easiest answer of my life. He said the only way was to cheat a little bit. I learned at home that I shouldn’t cheat, but he went on. “Instead of saying your name is Pia, we’ll say your name is Pelle.”

So I became a boy to be able to play football. And I liked being Pelle.

A few years later, I came to understand that the name was similar to that of a young Brazilian who had enchanted the world at the 1958 World Cup, which had been held in Sweden. After that, I wanted to be Pelé. Sometimes I wanted to be Johan Cruyff. At other times, I would like to be Franz Beckenbauer. Those were my childhood heroes.

I do miss playing football. It is the most enjoyable sport in the world. I was lucky enough to play it professionally and to have built a career that I am proud of. I was on the pitch for some of the Swedish national team’s first international matches in the 1970s. We became European champions in 1984, at the very first Women’s European Championship. I also played in the first Women’s World Cup, in 1991, and at the first Olympic women’s tournament in 1996 (below).

Women’s football is a story of struggle and achievement, and it is a privilege to be part of this history. In addition to the pride, the journey has also taught me some lessons. Perhaps the biggest is that nothing comes easily. You must fight. And no one wins a fight alone. It was the union of many people that made our victories possible.

It is precisely this union that keeps me in football. It is not only about my generation. I am also doing it for the next ones.

When I was a player, it was different. I had another job that ran parallel to my sporting career. I trained at 7am and then went to work. By the end of the day, it was time to get back to the football pitch.

Today, girls can be professional athletes – and it is not just a question of money. If they want, girls have the right to dedicate themselves to the sport they love. They can spend the day training. That is being professional.

"solidarity and team spirit are the basis of any team"

I do not know exactly when I decided to become a manager. What I do know is that I was a player full of opinions about the game. I had so many ideas that a coach once said to me: “Why don’t you take a course to become a manager? You’ll see it’s not that simple.”

It was neither rhetoric nor irony. I agreed, and he signed me up for the course. It was a path with no turning back.

My coaching studies started during my career as a player. Pia the manager was born while I was still Pia the footballer. I performed both roles at Hammarby, in Sweden, in the early 1990s. It was my first experience as a coach.

After I retired from playing, I stayed involved in Swedish football. I worked for the Swedish FA for 11 years. One day, an American named Mark Krikorian called the Swedish FA and asked to do an internship with us. He knew how to ask great questions. We spent a lot of time talking about tactics and systems.

A few years later, Mark became the manager of Philadelphia Charge. He remembered our conversations and invited me to be his assistant coach. That opportunity changed the course of my life. It was my gateway to the United States – and now it is impossible to dissociate my career from American football.

Two years later, I got an offer from the Boston Breakers. It was my first opportunity to be a head coach (above). I felt ready for the challenge because my years as Mark’s assistant had given me a great schooling. I watched everything: how he dealt with the players, his tactical strategies, his training routines. I was already aware of the differences in football and culture between the United States and Sweden. Now I was ready to lead a team.

Today, I am a different coach to the Pia who took over at Boston – at least when it comes to game tactics, which is something that needs constantly updating. However, there is one thing that remains the same. I am talking about the philosophy of work – specifically, which values are fundamental to building a team? For me, the answer has not changed at all since then. Solidarity and team spirit are the basis of any side.

As a player, I was a star. But I never forgot that the game was not about me. Football is a group sport. Stars only shine if they play in an organised and supportive team.

In 2007, I received my first opportunity to work with a national team. That was another road with no turning back. Since I received an invitation from the Chinese national team to assist Marika Domanski-Lyfors (below, right), I have worked only with national teams.

The following year, just a few months before the Beijing Olympics, I was invited to be the head coach of the United States. A team accustomed to winning, and one that was coming from a third-placed finish at the World Cup the previous year.

In my head, I knew I would have to make some changes to the team. After all, the Americans would not bring in a Swedish manager to leave everything as it was. But I also knew it was not necessary to make radical changes.

The support they gave me was fantastic. We made a lot of adjustments in defence. In attack, we only had to make one or two changes. It worked. In 2008, we won the Olympic gold medal.

Many people will remember that. Not many will remember that we started those Games with a defeat to Norway. It was a turbulent moment. Many doubted our ability, but not us. We knew we were capable of winning all the following games, and that’s exactly what we did.

Honestly, I did not have much influence over that achievement. When I arrived, there was already a team in place. My influence was much greater at the following Games in 2012.

A year before that, we finished runners-up at the 2011 World Cup. We felt massive frustration, having lost the final to Japan on penalties. We would meet them again in the Olympic gold-medal match in London – this time, the outcome was much more pleasing (above).

Football can be inexplicable. In the World Cup final, we were the better team and lost. In the Olympic final, the opposite happened. That doesn’t take away the taste of victory, of course.

I remember walking around the Olympic village in the days that followed our victory, still in disbelief at what had happened. It is hard to put into words the feeling of winning an Olympic gold medal. It is a happiness that lasts forever.

"victories give you a voice. When you win, people are more interested in listening to you"

I was also happy to take charge of the Swedish national team. Returning to my home country and coaching the team at a home Euros in 2013 was incredible. We finished third in the competition, but football sometimes transcends results.

I have always been good at enjoying the journey. I love football. My love is not attached to the outcome. The experience of coaching in my country is an eternal pride.

We did not win the title, but we put women’s football on the map in Sweden. That is not only important for the sport, but also relevant for society. But victories do give you a voice, you know? When you win, people are more interested in listening to you.

At the 2016 Olympics (above), we faced a huge challenge in Rio de Janeiro. In the group stage, we lost 5-1 to the hosts, Brazil. It was not an easy moment. But we kept fighting and we reached the quarter finals. There, we beat the defending champions, the United States, on penalties.

In the semi final, we met Brazil again, in a crowded Maracanã. Once again, we progressed on penalties and made history by reaching the final. I am very proud of what we achieved there. It was not about losing the gold medal – rather, winning the silver medal. That is the true Olympic spirit.

The next stage of my career was coaching the Swedish national youth teams. An important and fascinating job – but then came the invitation from Brazil, and everything changed. I felt honoured at the prospect of the challenge, and full of energy to face the new project.

"i dream of another olympic final. it would be amazing to get there with this brazil team"

I have said that managing Brazil is the major challenge of my career. Above all, because of the cultural differences between our countries. But I have found a team with the will to grow. It has been both challenging and pleasurable.

It is gratifying to have an athlete of Marta’s calibre by our side. Someone with so much individual quality, but always willing to lend her talent for the benefit of the team.

We are ready to compete. We have the conditions to reach the quarter finals. Then, experience shows me that any of the quarter-finalists are capable of winning gold.

The Brazilian national team is still in the process of turning its technical ability into trophies. The absence of a major title generates enormous expectations in the country. My job has been finding solutions to create a winning mentality.

After the Tokyo Olympics, we have the Copa América in 2022 and the World Cup in 2023. I have repeatedly said that all competitions are important. The work needs to have consistency to get results.

Of course, if we get an Olympic medal, it will be fundamental in getting people to listen to us more carefully. If it happens, it will help us considerably in the continuity of our work. But I aim to make the team play well.

If we do not win, we must leave the pitch with the clear impression that we could have won. I will be extremely disappointed if we do not play our football.

I obviously dream of experiencing another Olympic final. It would be amazing to get there with these talented Brazilian footballers. It would be a tremendous achievement for me, for Brazil, and the whole of South America.

Look at women’s football, and even the role of women, in the different South American societies. Can you imagine the potential consequences of Olympic gold?

They will certainly listen to us more.