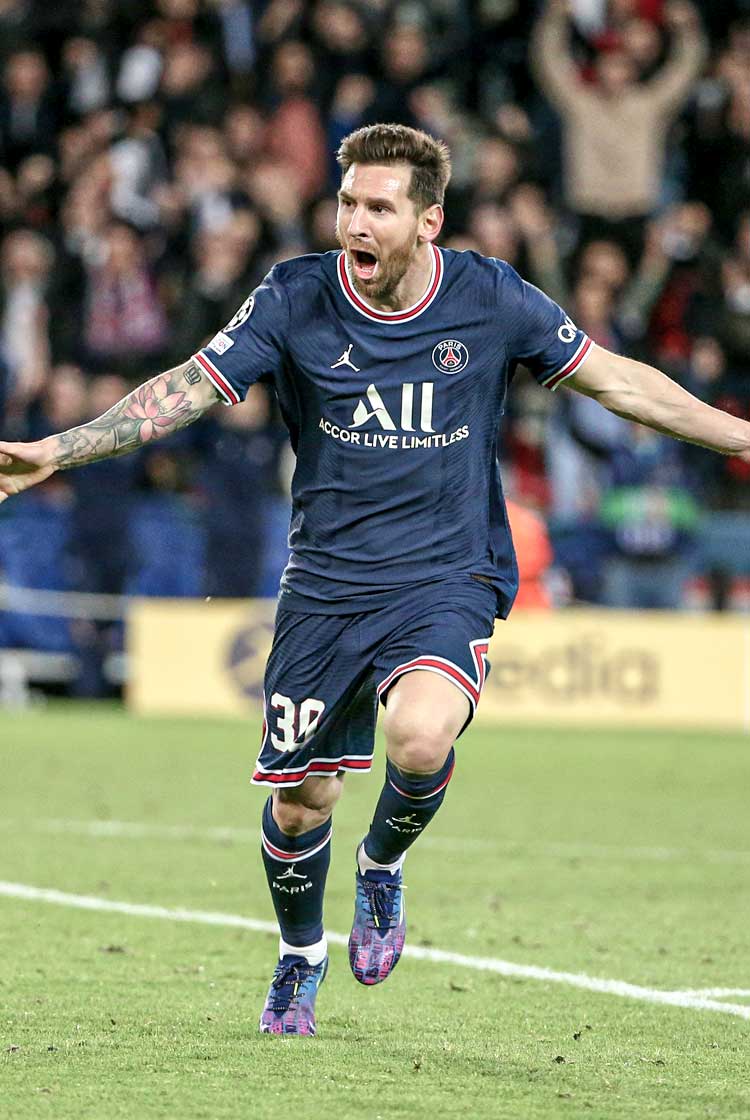 Lionel Messi scored his first goal for Paris Saint-Germain as Mauricio Pochettino dealt a psychological blow to Pep Guardiola's Manchester City in their Champions League group-stage tie. Idrissa Gueye struck the opener after eight minutes following a miscued effort from Neymar, and Messi sealed the win with a delightful strike from the edge of the penalty area following a neat one-two with Kylian Mbappé. It was a frustrating night for City, who were fortunate not to have Kevin De Bruyne sent off for a rash challenge on Gueye. Defeat leaves Guardiola's side third in Group A, having conceded five goals in just two Champions League games so far this season. “We dealt with PSG first of all, but we know it's impossible to control Leo for 90 minutes,” Guardiola said. “He was not much in touch with the ball – of course he was coming back from injury, he needed a bit of rhythm – but we know quite well when he can run and get close to the ball, he is unstoppable.” Pochettino added: “Messi is the best player in the world, no doubt, and of course I'm happy to see him enjoying football. He and all the team worked really really hard to get the victory.”

PSG set up with a 4-3-3 structure, against opponents who defended using a 4-2-3-1 shape. Bernardo Silva dropped alongside Rodri to form a double pivot for the away side, with Kevin De Bruyne jumping forward onto PSG’s single pivot, Marco Verratti. PSG's front three of Kylian Mbappé, Neymar and Lionel Messi started out with Neymar and Messi hugging the touchline during build-up to stretch the pitch, before narrowing once the back line and tight midfield three had progressed past City’s press.

The full-backs, Achraf Hakimi and Nuno Mendes, pushed forward to provide the attacking width once Neymar and Messi had moved infield, and PSG’s front line were very fluid in their movements, happy to swap positions constantly. The home side took an early lead when Mbappé joined Messi and Hakimi on the right, before crossing for Idrissa Gueye to finish into the top corner.

PSG’s compact central midfield kept their shape and in doing so created space between the lines for any of the players in the front line to drop into and collect the ball. Messi repeatedly dropped short to receive to feet, moving off the right to do so. Mbappé and Messi rotated positions regularly, and right-back Hakimi pushed forwards much more than Mendes on the left, with Neymar holding his high and wide starting position on that side.

With the two number eights, Gueye and Ander Herrera, rarely moving away from Verratti, Messi or Mbappé would drop diagonally into space between the lines to receive. This tight central midfield positioning also provided a solid buffer against counter-attacks, and City struggled to penetrate centrally after a midfield regain; instead they were often forced to play backwards.

Having gone behind, City started to dominate the ball, and PSG had few opportunities to attack. They defended deep and tried to find their attackers with through balls out wide into the channels. However, these quick breaks left their front three isolated and they struggled to establish possession in the attacking half of the pitch. João Cancelo, Kyle Walker and Rodri were superb for City at winning the ball back quickly in central areas.

With PSG forced to attack around their opponents, City’s central players could then recover into position. Thanks to Walker’s pace on City’s right, PSG’s most effective counter-attacks came on the opposite flank.

There were, however, rare moments where the home side managed to break away from City’s counter pressure inside their own half and secure the ball for long enough to allow the midfield and back line to push out. When that happened, the home side relied on their talented front three to create in severely underloaded situations.

It was from one of those situations that  Messi doubled PSG’s lead through an outstanding finish from a rare successful breakaway. PSG managed to work the ball away from City’s central pressure, and Messi drove forward, combined with Mbappé, and finished into the top corner to all but secure victory.

Man City were set up in by Pep Guardiola in a 4-3-3 formation when in possession, up against a PSG side in a 4-3-3 defensive shape. With PSG’s front line very narrow when defending, the visitors progressed forward through the wide areas, frequently finding wingers Jack Grealish and Riyad Mahrez. This often stemmed from the centre-backs missing out the full-back and playing directly into the wide areas.

The two number eights – Kevin De Bruyne on the left and Bernardo Silva on the right – then made narrow forward runs through the inside channels as PSG’s full-backs moved away from the centre-backs to press the City wingers. Although this created gaps in PSG’s back line temporarily, the structure and positioning of PSG’s tight central midfield three meant those gaps were difficult for City to access. They also collected any loose second balls particularly well.

When PSG dropped into a lower block, City still built through the wide areas, but supporting runs instead came from full-backs Walker and Cancelo, who varied whether they overlapped or underlapped. In response, PSG’s closest central midfielder moved wide to support the full-back on that side of the pitch. This eventually created more room for De Bruyne and Silva underneath the ball, as City found a very brief central midfield overload.

From the space he was starting to find, De Bruyne hit an outstanding cross which Sterling headed onto the crossbar, before Silva missed a huge chance from just yards out. City continued to threaten from wide deliveries but their finishing let them down on a few further occasions.

With PSG continuing to push their closest number eight across to press City’s wide build-up play, penetrative forward runs were made by De Bruyne and Silva. Grealish and Silva would also rotate between themselves on City’s left to change who made the runs in behind, with De Bruyne then operating on the right side. This better suited his crossing and he was more comfortable making runs beyond centre-forward Raheem Sterling on the right. He got into a good shooting position on the right several times, but could not beat Gianluigi Donnarumma.

Ultimately, the visitors were unable to break through PSG’s low block despite dominating possession and creating several clear-cut chances through well-choreographed movements.