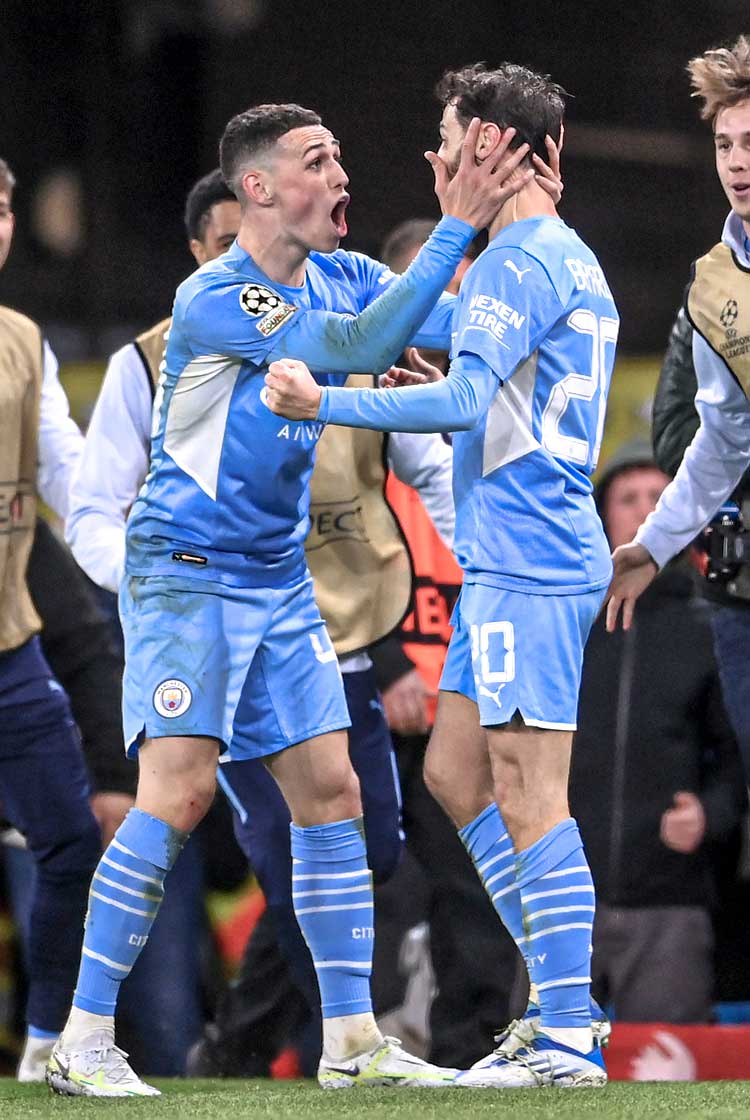 Manchester City will take a slender lead to the Bernabéu for next week's Champions League semi final second leg against Real Madrid after edging a seven-goal thriller at the Etihad Stadium. Pep Guardiola's team were by far the better side on the night and might well have scored more than the four goals they did manage. It could turn out that they are made to rue missing so many chances after a Karim Benzema-inspired Real Madrid fought back to score three goals and keep the tie alive. Both managers agreed it was an entertaining game, but bemoaned their respective team's defending.

“It was a fantastic game for both sides," Guardiola said. "We did many good things. Unfortunately we conceded goals and we could not score more. But [the tie is] two games and we have another one in one week. We go to Madrid to try to win the game."

"As a supporter of football, it was a fantastic game," said Real manager Carlo Ancelotti. "But as a manager of Madrid... we scored three important goals but didn't defend so well, we could have defended better.  "

Dominating possession and playing on the front foot

Manchester City were set up in a 4-3-3 formation in possession, with their outside central midfielders in the half-spaces and the wingers maintaining the team's width. Rodri anchored the midfield and the centre-backs took up aggressive positions when City had possession, keen to step out with the ball (below). City found it very easy to maintain possession, and often circulated the ball for long periods as they looked for an opening. The system that City played allowed them to dominate the centre of the pitch, while having players in key positions out wide who could hurt Madrid.

Free-roaming eights and direct balls in behind

City looked to manipulate Real's shape to open up dangerous spaces to attack. The hosts did so by creating local overloads, thus drawing more than one opponent towards the ball and thereby reducing Real's pitch coverage. City stretched play vertically through their centre-backs providing depth and their forwards occupying Madrid’s deepest players, while they stretched the game horizontally through the positioning of the far-side winger.

After drawing a full-back out, City used simple balls in behind to drag a Madrid centre-back out of position. In the below image, Dani Carvajal has been drawn out and Eder Militão moves to engage Phil Foden on the City left. This leaves a 3v2 in the penalty area, which City use to their advantage: within 10 seconds of this pass in behind, the ball was in the net for City's second goal.

Without the local overloads, width and depth of the team, and the willingness to run in behind, this attacking strategy would not be possible. Foden in particular was very effective when making these forward runs. Additionally, the two City full-backs are inverted in central-midfield positions to help provide the security that allows number eights Kevin De Bruyne and Bernardo Silva to roam from their positions.

Real Madrid's out-of-possession approach left them very vulnerable. They seemed to be caught between pressing high and operating a little deeper to maintain compactness. In the end, they did neither particularly well. When pressing, the distances from front to back were too big, and City were left with too much space to open up passing lines into an attacker between the lines or in behind. On other occasions, Karim Benzema plus one other would go and engage but not be backed up by their midfield. As a result, City could find a simple pass into single pivot Rodri.

As the game progressed, Madrid operated more cohesively. They still often left the diagonal pass into the opposite half-space available, though, and City capitalised on this to play through their opponents. A key issue for Madrid was the consistency of their defensive line, who did not operate as a unit and often looked disjointed, allowing City to manipulate them with their movement, opening up spaces in behind (below) and leading to good-quality chances. Better finishing from City on the night could have put the tie to bed.

Using the width of the pitch

Real Madrid set up in a 4-3-3 formation when in possession. The middle of the pitch was often too crowded for them to play through, so they looked to the wide areas, with their full-backs pushing on to support the wingers. They aimed to create 1v1, 2v1 and 2v2 situations out wide to then create crossing opportunities. In midfield, Luka Modric tended to be the one who advanced furthest up the pitch, occasionally making runs in behind. Toni Kroos and Federico Valverde held their positions in the middle of the pitch to help with ball circulation and to provide security behind the ball (below).

Real Madrid had real problems sustaining periods of possession in the first half. Part of the reason for this was City’s disciplined and compact out-of-possession 4-4-2 shape. In contrast to Madrid, the hosts maintained close distances as they pressed high up the pitch and limited Real's options to play out. This often resulted in hopeful, direct passes towards Benzema, from which City almost always picked up the second ball. As a result, Real couldn’t create goalscoring opportunities from their own possession in the first half, and their best opportunities came from regaining the ball in City’s defensive third and launching counter-attacks from there. On three occasions in the first half, they won the ball from City’s defensive or midfield unit and immediately looked to counter towards goal (below). While on two occasions they failed to take advantage, the third led to a deep cross Benzema expertly converted to reduce the deficit despite City's dominance.

Towards the end of the first half and throughout the second half, Real held on to the ball a bit better and accessed more dangerous areas of the pitch. This tended to happen when City's wingers had engaged high up the pitch, leaving double pivot Bernardo Silva and Rodri with too much of the pitch to cover laterally. Real's midfield three could then receive on the outside of double pivot in the half-spaces (below). The Madrid wide attackers, who thrived in 1v1 situations, would immediately look to run off the shoulder of their direct opponent and access the space in behind. As City maintained compact distances from front to back, their high engagement line meant a high defensive line and lots of space in behind for Madrid to attack. This was a risk-versus-reward situation that City had to weigh up, and Real took advantage of the risks City took.