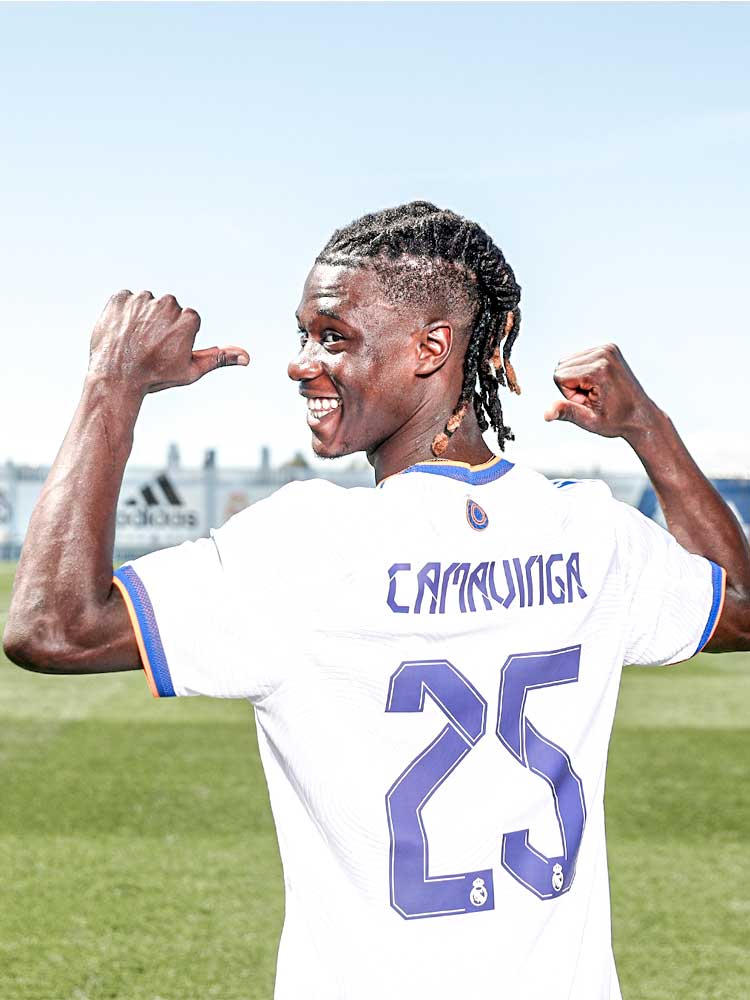 Profile
The £27m Eduardo Camavinga wouldn't be the first exciting young talent to move to Real Madrid as a teenager and then struggle to establish himself, but his arrival at the Santiago Bernabéu comes with them potentially entering a new era. Regardless of him being recruited, at the age of 18 in August 2021, so soon after Martin Odegaard was sold to Arsenal, their transfer policy is increasingly that of a club attempting to build for the future.

In the same summer Sergio Ramos and Raphaël Varane departed, consideration was again given to how much longer the decorated midfield three of Casemiro, Luka Modric and Toni Kroos can continue to perform to the consistently superb levels long asked of them. Camavinga, alongside Éder Militão, Federico Valverde, Vinícius Júnior and more could provide the core of Real's next great team. None other than Didier Deschamps, a World Cup winner as a defensive midfielder for France and a long-term teammate of Zinedine Zidane, said of his promising compatriot: "He is a very young player with a lot of great skills and huge talent. He is still young."

Tactical analysis
Camavinga is a left-footed central or defensive midfielder who particularly impresses at pressing and duelling for possession as an individual (below). He quickly moves to apply pressure to the ball, and complements doing so by just as effectively decelerating to slow down on arrival and avoid committing fouls.

If he is instead attempting to tackle, he can do so from the side, directly opposite, or when chasing his opponent from behind, when his technique of reaching his legs around that opponent to poke the ball away contributes to his success. It is when he is being particularly aggressive in moving out of his midfield line to make a challenge that he is at risk of being beaten by an opponent facing the opposite direction – even though he can decelerate as well as he can, if that opponent turns, Camavinga can be slow in turning and again accelerating in that same direction, leaving him with increased ground to cover.

It is therefore when he is tracking the opposition's ball carrier that he is perhaps at his most effective, regardless of whether he is doing so in the moments after he has advanced to press or is chasing back (below) to do so. His endurance, energy and intensity ensures that he can repeatedly succeed, and perhaps largely because of his desire. That he is so mobile also increases the territory he is capable of influencing.

When he is the one with the ball at his feet, he carries possession well and switches plsy effectively from his left foot. Cross-field passes appear effortless, and are executed with the small amount of back lift required to generate power and therefore reach his furthest teammates.

When instead carrying the ball (below) he is capable of surprising opponents with late, often explosive, changes of direction to move past them, often having done so after waiting for those opponents to commit to challenges or move off-balance. Those explosive qualities, regardless, are more valuable when he is accelerating forwards with the ball, and doing so over long distances, when he relies on his agility and mobility over protecting and hiding the ball with his strength.

If that desire to wait for opponents to commit can slow down attacks, Camavinga can dribble towards both the left and right on either foot, making it difficult for opponents to force him in one direction. His technique also draws fouls and wins set-pieces.

Role at Rennes
Camavinga mostly featured in central midfield in Rennes' 4-3-3 (below) during 2020/21, having previously so often been a defensive midfielder in the 3-5-2 or 4-4-2 they favoured. From his more advanced role he spent increased time in the inside channels, and drifting wider to receive possession; from both areas he drove forwards and attacked while being supported by overlapping runs from their full-backs.

That Rennes' wide forwards – the promising Jérémy Doku regularly impressed in doing so – were instructed to move infield gave Camavinga further support through the inside channels where he combined with those around him to resist defensive pressure, particularly at a time when some opponents were pressing him with numbers as he advanced. From those same inside channels, Camavinga executed his switches of play to the full-back or wide forward – sometimes both – working to retain their width.

His pressing efforts also prioritised the inside channels, but his versatility meant him also moving infield to take an opposing defensive midfielder, moving wider towards a full-back, or moving further forwards to a central defender – consistently doing so with aggression, and potentially while pairing up with a central midfielder, wide forward or striker. Across his last full season there he participated in more individual duels than any other player at Rennes.

When Steven Nzonzi withdrew from the base of Rennes' midfield to operate as a third central defender and to encourage their full-backs to advance, both wide forwards moved infield, and Camavinga, in turn, operated as either another attacking midfielder or became their defensive midfielder to release Benjamin Bourigeaud. When he did so he increasingly used his short passing ability to link with others and to progress possession after receiving it from those in defence; he also continued to execute switches of play into their advancing full-backs, and dribbled forwards from more central territory before feeding those further forwards.

When later in the season Rennes were organised into a 4-2-3-1 or 4-4-2 (above), Camavinga featured as one of their two central midfielders, from where he was more reliant on his passing range from deeper territory. The front two in their 4-4-2 remained narrow and, as individuals, often withdrew into deeper territory in front of Camavinga, who like Nzonzi in their 4-3-3, also withdrew to between or alongside their two central defenders. It was when the central midfielder alongside him instead withdrew into deeper territory that Camavinga had greater freedom to advance away from the ball via his well-judged runs; the attacking support he provided was similar to that seen in their 4-3-3.

From his deeper position Camavinga had increased defensive responsibility, and therefore increasingly screened against attacks and covered teammates. If not the sole central midfielder, he continued to make the individual movements he offered in their 4-3-3, but given their wide forwards moved infield, he largely resisted moving to as far as the opposition's defensive line. He instead pressed more into wide territory, supported the nearest full-back if that full-back was recovering his defensive position, and offered defensive protection ahead of their central defenders.