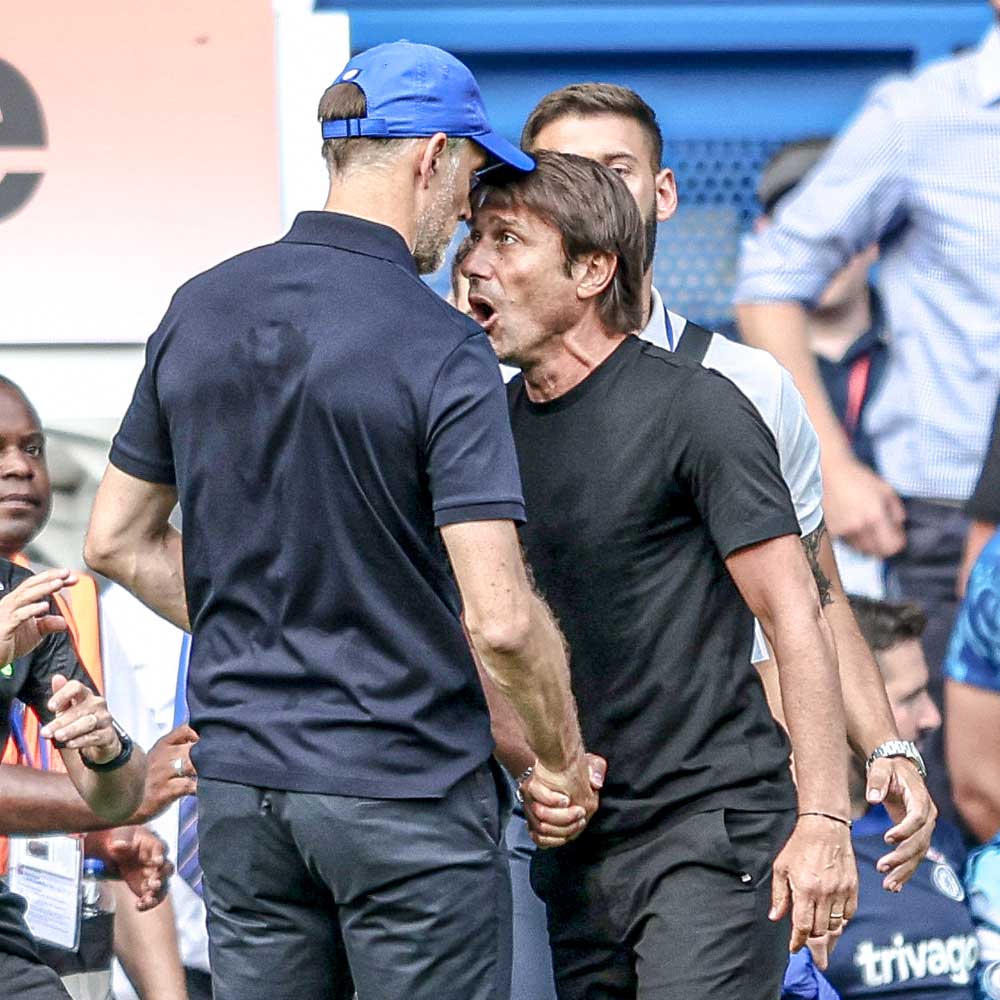 Thomas Tuchel and Antonio Conte were both sent off as tensions boiled over at full-time of this fiery London derby. Feelings had been simmering throughout the game, which Chelsea had dominated much of, and the hosts looked on course to hold out for a win after Kalidou Koulibaly's impressive early strike. Spurs found a way back into the game, but Tuchel and his side were angered when Pierre-Emile Højbjerg's equaliser was allowed to stand following a potential foul by Rodrigo Bentancur in the build-up. Then, when Reece James thought he had won the game with a goal to restore Chelsea's lead, Tuchel went running down the touchline past Conte to celebrate, before Conte later got his revenge as Harry Kane nodded in a stoppage-time leveller. Things really kicked off at the post-match handshake between the managers, as players and staff piled in to a huge melee.

"It was hot from the temperature, hot between the benches, hot on the field and hot between the spectators – everything you want and hope for in a match like this early in the season," said Tuchel. "There's no hard feelings. I feel like it was a fair tackle from him and a fair tackle from me. We did not insult each other, we did not hit each other, we were fighting for our teams. I'm surprised that we both got a red card for that."

Chelsea attacked in a 4-2-2-2 structure, converting from their out-of-possession back five. Ruben Loftus-Cheek was a part of the back line without the ball, but he narrowed into the right inside channel when attacking. From here he made penetrative forward runs, especially when Spurs’ left wing-back Ryan Sessegnon had jumped out to press Reece James, who held the team’s width on the right in attack (below). Mason Mount operated as a second number 10 between the lines in the left inside channel, with Marc Cucurella providing similar width to James. Raheem Sterling and Kai Havertz were deployed as a front two, working in between the visitors’ three centre-backs, but also making movements out wide to create more space for Mount and Loftus-Cheek to receive.

Chelsea’s play around Tottenham’s second line was key to their dominance of possession, with the pairings of Mount and Cucurella on the left, and James and Loftus-Cheek on the right, dovetailing effectively. One player always held the width on each side, and the other narrowed inside to exploit the inside channels. Runs in behind from Sterling and Havertz also increased the distance between Tottenham’s three centre-backs and the second line, with Sessegnon and Emerson Royal struggling to deal with the distances they had to cover to get out and engage the ball-carrier when play was spread out wide (below). Once Chelsea got into the final third, Tottenham’s centre-backs prioritised overloading Chelsea’s two centre-forwards, allowing the hosts to repeatedly penetrate into the penalty area, but clear-cut chances still proved hard to come by.

Tottenham’s change of shape to a back four brought them back into the game and limited Chelsea’s build-up play, but new spaces emerged in midfield, especially at transitions. Whenever Chelsea moved the ball away from congested central area, Cucurella and Loftus-Cheek in particular found themselves in 1v1 situations more often (below). Although Emerson’s overlapping runs pinned Cucurella back more, Davies was more reserved at left-back. This meant Loftus-Cheek wasn’t required to drop as deep, and he proved a key attacking outlet in the second half.

Tuchel reacting to the equaliser

Tuchel followed Conte by changing formations in the second period, switching to a 3-4-3 shape. James was moved to right wing-back and posed a significant threat, as he dragged Spurs’ left-back away from the rest of Tottenham’s back line. With Tottenham now only playing with two centre-backs, Sterling and Havertz had more room to penetrate into, and Havertz missed a golden chance from James’ superb cross to put Chelsea 2-1 up. This new shape from Tuchel also maintained Chelsea’s threat on the transition. With wing-backs now available to counter-attack from a higher starting position (below), they often looked to run beyond Tottenham’s full-backs. James was free to get forward for what was so nearly the match-winning goal.

Numbers on the right

Tottenham used their usual 3-4-2-1 attacking shape, with Harry Kane often dropping into the right inside channel. This movement allowed Dejan Kulusevski to remain wider for longer, and as a result Emerson Royal provided underlapping runs from wing-back (below). On the left, Spurs often had fewer attacking numbers as Son Heung-min inverted, sometimes taking up a centre-forward position. Ryan Sessegnon overlapped around the outside, where he wasn’t tracked fully by a retreating Ruben Loftus-Cheek. Spurs struggled to break through Chelsea’s press, however. With the exception of a few brief combinations on their right, they failed to test Chelsea’s out-of-possession back five.

Tottenham struggled to build through Chelsea’s mid-block, as Raheem Sterling and Kai Havertz pressed the visitors’ three centre-backs very effectively despite being underloaded. This underload high up the pitch meant Chelsea had an overload around Kane, with Thiago Silva and Kalidou Koulibaly following him as he dropped to receive. Reece James nullified Son whenever he dropped, following all of his runs and snapping at his heels to win the ball, while Sessegnon ran beyond James into the space he left. When left centre-back Ben Davies pushed higher, he was tracked by Sterling, and Højbjerg dropped into the back line (below). One of Chelsea’s midfielders – usually Mason Mount or N’Golo Kanté – then pressed alongside Havertz in the first line, with the hosts comfortably tracking all of Tottenham’s attempted rotations.

Conte changed to a back four early in the second half, as Tottenham continued to struggle with the movements of Chelsea’s number 10s. Davies and Emerson were converted into full-backs and provided the team’s width, as Son, Richarlison, Kane, and Kulusevski acted as a rotating front line ahead of the double pivot in a 4-2-3-1 shape (below). This allowed Tottenham’s central midfielders to move out to cover the inside channels, and they also threatened the hosts’ three centre-backs when receiving between the lines.

Kane and Richarlison ensured Tottenham always had someone making a run in behind – something that hadn’t always been the case in the first half, when the front line kept dropping short to receive. Son and Kulusevski both rotated and dropped, and now at the same time, which overloaded Chelsea’s central midfield (below). This helped the visitors break Chelsea’s first line much more consistently, before penetrating into the final third through the wide areas. The full-backs pushed forwards – especially Emerson on the right – and eventually Spurs grabbed the late equaliser that sparked Tuchel’s fury on the touchline.