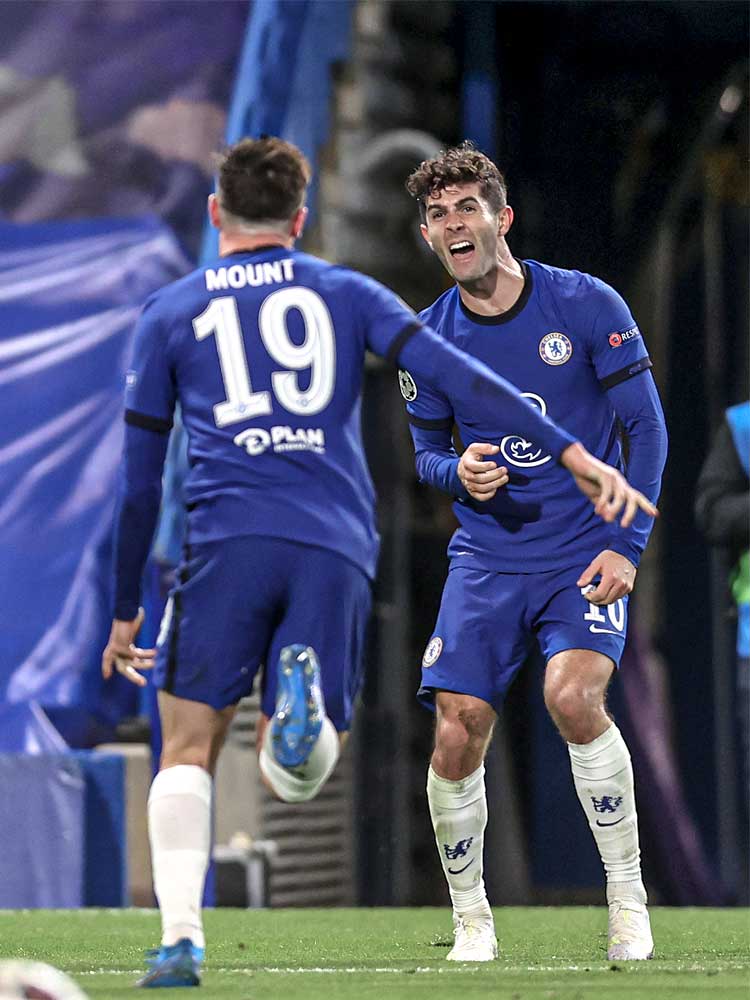 Chelsea will meet Manchester City in the Champions League final in Istanbul after impressively overcoming Real Madrid at Stamford Bridge. Thomas Tuchel's improving team was suitably rewarded for their dominance with goals for two of their most improved players, in the first half from Timo Werner, and in the second from Mason Mount. Similarly to Roberto Di Matteo in 2012, Tuchel could follow his mid-season arrival by leading Chelsea to both the Champions League and FA Cup. "Real had a lot of possession and they made us suffer, but we were dangerous with counter-attacks and never lost the hunger, never lost their desire to defend," the German said. "Second half was even better, the structure to defend and in the second half, we could've scored much earlier. It's a fantastic achievement." His opposite number, Zinedine Zidane, said: "They deserved the win. We fought and tried but they deserved to win and go through. We needed to be better going forward. We didn't have any clear chances; they made a number of them."

Chelsea were organised by their manager Thomas Tuchel into a 3-5-2 formation led by the front two of Timo Werner and Kai Havertz. Their visitors, Real Madrid, defended with a 5-3-2 but also occasionally adopted a 4-4-2, as was determined by their approach to Ben Chilwell and Antonio Rüdiger.

Vinícius Júnior had been instructed to essentially man-mark Chilwell, to protect Eder Militão from being overloaded by Chilwell and Mason Mount. Karim Benzema and Eden Hazard took Andreas Christensen and Thiago Silva, if the distance was suitable Luka Modric would advance to take Rüdiger, and Toni Kroos and Casemiro took Jorginho, N'Golo Kanté, and Mount. Given doing so risked an overload, Benzema, Hazard and Modric combined to pressure Chelsea's back three and also to take Jorginho; the player they considered least threatening was the one left free.

Real's approach worked during the first passes, but when Chelsea began playing into midfield and then back into defence or wide, play evolved too quickly for that principle to be applied, and Chelsea therefore accessed the free player and progressed possession. A further approach involved Havertz withdrawing into a deeper position to take possession and Werner remaining advanced to pose a threat in behind. When Havertz withdrew to towards the right as Kroos was prioritising an opposing midfielder or central defender, Mount would advance towards the left and Werner would drift towards the right, re-establishing a front two and exposing Nacho Fernández's uncertainty regarding whether to move to Havertz or to hold his position and risk the German receiving, turning and advancing. César Azpilicueta would also complement that, by advancing to draw Ferland Mendy, who otherwise would have been free to cover Nacho.

Beyond the variety of their movement, Chelsea used longer passes in behind for Werner to pursue – even if the German occasionally moved a touch too early and Real succeeded in catching him offside – and posed a threat on the counter during moments of transition. They released forward runners without hesitation – particularly on the outside, given Real's full-backs so regularly advanced to contribute to attacks. It was therefore little surprise when their second goal followed Kanté making a regain. If they had been more clinical in front of goal, Tuchel's team would have won even more convincingly.

Zinedine Zidane set Real Madrid up in a 3-5-2 formation led by the front two of Karim Benzema and Eden Hazard. Their hosts, Chelsea, defended with a 5-3-2, via Ben Chilwell and César Azpilicueta withdrawing from midfield and into defence.

The front two of Timo Werner and Kai Havertz prioritised pressing Sergio Ramos and Nacho Fernández and forcing possession wide, where if it reached one of Real's full-backs, one of Chelsea's wider central midfielders moved to engage so that their back five could be preserved and their central defenders were free to follow any opponents moving to receive to feet. Given that risked presenting Zidane's three central midfielders with freedom, Havertz or Werner moved to take Casemiro when not pressing a central defender.

Casemiro also withdrew to between Ramos and Nacho to form a back three and stretch Chelsea's front two. Ferland Mendy operated a a left winger, in front of him Eden Hazard had the freedom to roam, and behind him, Nacho also sought to make off-the-ball runs beyond Chelsea's midfield, ensuring Toni Kroos had to move deeper to provide defensive security from behind the ball. Nacho's forward runs offered potential against Chelsea's willingness to press towards one side of the pitch and therefore Real's temptation to switch play. An alternative method of resisting Chelsea's pressure involved playing into Modric's feet and him then bending passes to the relevant teammate, in doing so using the momentum of Chelsea's proactive defending against them.

It was through posing too little threat in behind that Real suffered. The attacking players too often moved to receive to feet, and therefore too rarely tested their opposing defenders and the back five that was largely preserved. Thomas Tuchel's team, regardless, deserves credit for the aggression and intensity with which they pressed, which often forced Real to rush. Even when they slightly retreated towards the final whistle, they retained that same intensity.