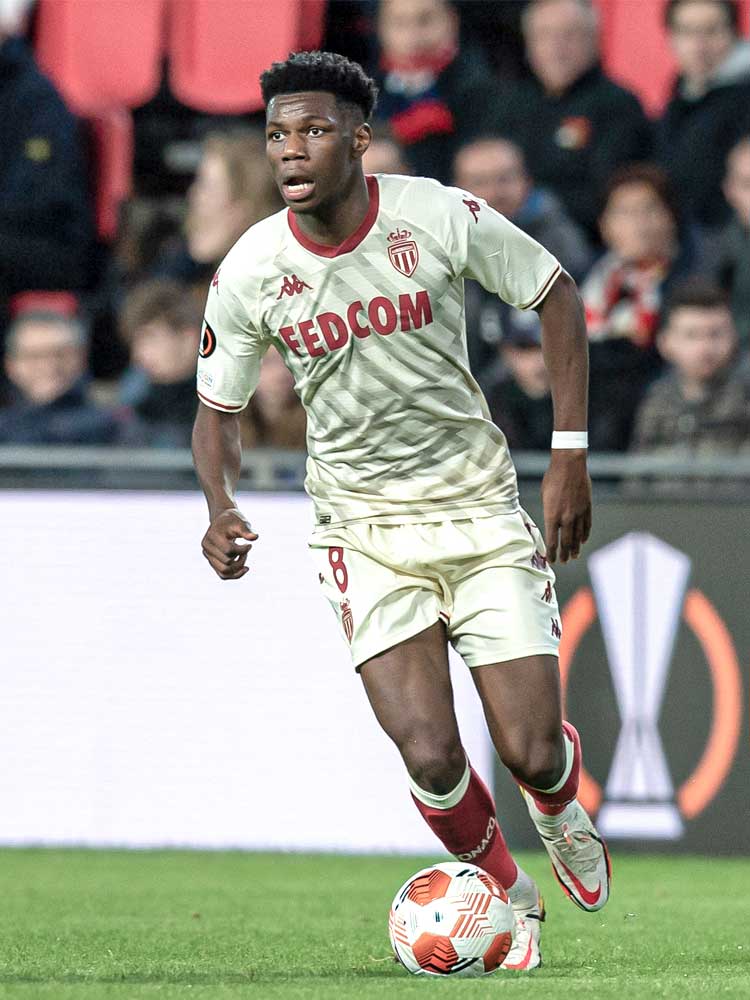 Profile
In the modern era alone, Monaco has proven a fine finishing school for the exciting talents of, among others, Kylian Mbappé and Tiémoué Bakayoko, and before then the generation of Jérôme Rothen and Patrice Evra, and even earlier the great Thierry Henry. Entering 2021/22 at the age of 21, Aurélien Tchouaméni has established himself as the likeliest to follow their lead.

Signed from Bordeaux in January 2020 for £16m, he has also already gained the admiration of Didier Deschamps, a manager who knows better than most what it takes to succeed in central midfield. “There are quite a lot of new players,” Deschamps said after Tchouaméni’s first start for France. “They should use Aurélien as an example and perform the way he did.”

Tactical analysis
The right-footed Tchouaméni is proven as both a defensive or traditional central midfielder, and one with a forward-thinking mentality that means him regularly breaking lines from central territory with passes through or over opponents, or attempting switches of play. His ability to disguise passes enhances his potential to break lines or to find both teammates close by and in more advanced territory.

Unlike his accurate switches to a static or widely positioned teammate or when targeting a teammate’s feet, his longer-range passes through the cente of the pitch can be underhit, and also played without the necessary timing or speed. He, regardless, can reverse passes across his body or play passes around the corner (below) with admirable timing to capitalise on spaces between opposing midfielders, and can regularly be seen doing so when adopting deeper positions and then moving towards the ball before playing it.

An alternative involves him retaining possession to draw opponents towards him and create time and space for those further forwards to withdraw into and receive (below). There is a maturity to his judgement of when to do so, and when to release it to avoid getting caught in possession at a time when his teammates’ advanced positions increases the responsibility he has at the point of defensive transitions.

When he is required to defend, Tchouaméni is combative, presses opponents with aggression, and is both fast enough to sprint to make interceptions and strong enough to duel as an individual. That ability to cover ground is complemented by his reading of the game, and therefore when to leave his direct opponent to take a new one.

There are occasions Tchouaméni goes to ground to slide in and make interceptions that would otherwise be beyond his reach (below), but when doing so it is also more difficult to secure and retain the ball, and often requires both the support of teammates, and fewer opponents around him. If he is instead duelling he can push off in both directions, perhaps to prevent an opponent from dribbling around him.

If instead encoutering an opponent likelier to take a heavier touch and sprint over a greater distance, he attempts to use his arms to move them off balance without conceding a foul, and as an alternative has proven capable of both jockeying and tracking his opponents. A further approach involves the use of professional fouls, to prevent counters or opponents from gaining attacking momentum.

Role at Monaco
Tchouaméni most consistently features as a defensive midfielder alongside Jean Lucas, Youssof Fofana, or Eliot Matazo in either a 4-2-3-1 or 4-4-2. Overlapping full-backs contribute significantly to their attacking shape; should Caio Henrique push forward from left-back and Monaco’s left-sided forward therefore drift infield, Tchouaméni often covers from behind them, and capitalises on the additional passing option the left-sided forward represents.

When opponents adopt more compact shapes to restrict Monaco’s options through the central channels, Tchouaméni’s ability to play passes into Henrique’s path (below) has proved particularly valuable and helped them to progress around or over resilient defensive blocks. From similar territory he has also switched play towards the right.

Monaco regularly attack with an asymmetrical shape that involves Ruben Aguilar holding his position at right-back or tucking infield to form a back three. When the latter occurs, Tchouaméni has increased freedom to remain slightly further forwards and to provide a further passing option while continuing to cover Henrique.

It is when he is attacking towards that right that Tchouaméni plays more effective, close-range passes and combines with those around him to progress possession into the final third, potentially by disguising passes after taking the ball infield. That their right-sided forward regardless often remains wide means he just as regularly releases them to attack their opposing full-back. When they do so he rarely makes forward runs through the inside channel because he instead prioritises providing cover and support from around the ball from a more advanced position that recognises Aguilar remaining withdrawn.

Regularly the Monaco player who executes the most passes in the final third, Tchouaméni also posts some of their best numbers for making interceptions and winning defensive duels. He is regularly the slightly deeper positioned of their two defensive midfielders (above), and as a consequence is more responsible for providing cover, attempting to screen opponents, and targeting the second phase of direct play.

He is likelier to press as an individual and defend with aggression when covering across the pitch – perhaps from behind their left-back, from where he seeks to keep the ball to that side of the pitch. Should his opponent attempt to cut back infield, he will then commit to challenging them with aggression before seeking to recover his defensive position. His defensive actions towards the right – where Aguilar is likelier to be in position – more commonly involve him making recovery runs, tracking opponents, doubling up on the in-possession opponent, and screening against access back infield.