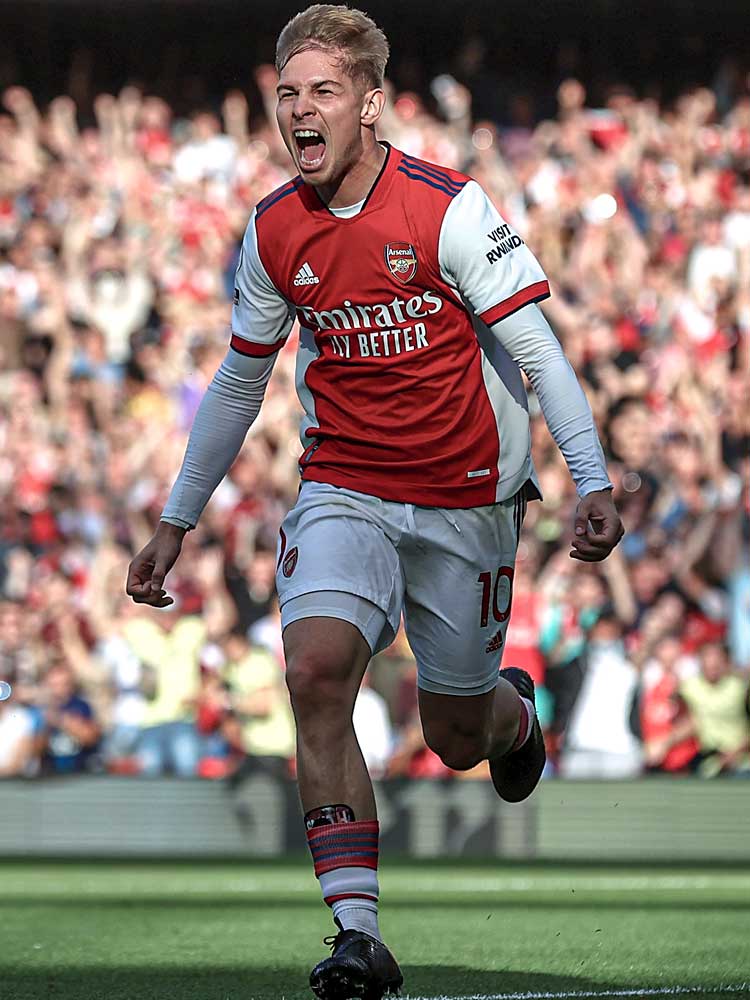 Arsenal continued to revive their season by recording a third successive victory and ensuring further misery for their struggling bitter rivals Tottenham. First-half goals from Emile Smith Rowe, Pierre-Emerick Aubameyang and Bukayo Saka rewarded a dominant performance; by the time Son Heung-min scored late in the second half, the hosts' victory was already close to secure. "We had great determination, great energy and great quality," said Arsenal's manager Mikel Arteta after they climbed to 10th in the Premier League, one place above Spurs. "I really enjoyed it. I see the belief the players have in what we do (in training)." His opposite number, Nuno Espírito Santo, said: "Credit to Arsenal because they were strong, aggressive and stronger. We are trying to build. There are a lot of things wrong and there are a lot of things good."

Arsenal were organised by their manager Mikel Arteta into a 4-3-3 formation led by Pierre-Emerick Aubameyang. Their visitors, Tottenham, defended with a 4-3-3.

The hosts' width was provided on the right by Bukayo Saka; from the left, Emile Smith Rowe drifted infield, so Kieran Tierney advanced from full-back. Spurs' narrow attacking line regardless prioritised covering against the double pivot being formed by Thomas Partey and Granit Xhaka; uncertainty between Dele Alli and Tanguy Ndombele over whether to support Pierre-Emile Hojbjerg's attempts to press Partey and Xhaka meant they were too often too flat to cover Martin Odegaard and Smith Rowe, who therefore relished space between the lines.

Arsenal progressed possession through the centre of the pitch via the overload Smith Rowe's movements created. It was when Spurs' defensive and midfield lines became particularly narrow that there was too little space to play through that; via Tierney advancing, Arsenal instead built with a back three and around Spurs' shape; where Tierney remained wide on the left, Odegaard drifted to towards the right.

Arsenal both built play and effectively transitioned forwards. It was after a regain in midfield, combined with Smith Rowe's intelligent movements infield from the left, that they took the lead. That lead was doubled when Hojbjerg struggled to win the ball when pressing high, and Xhaka released Tierney, Smith Rowe and Aubameyang towards the left, where they impressively combined.

The willingness of Spurs' full-backs to advance meant that Arsenal continued to counter forwards, and often released Saka as they did so. With Saka and Smith Rowe defending from narrowly wider territory, they evaded the attention of the double pivot and 4-2-3-1 Spurs started to adopt; Aubameyang complemented them by continuing to threaten in behind.

Their compact central midfielders also enhanced their ability to link into that wide territory, or into Aubameyang, once regains were made. Quick combinations from those central midfielders led to regular counters, and repeatedly forced Spurs into their defensive block.

Nuno Espírito Santo set Tottenham up into a 4-3-3 formation led by Harry Kane. Their hosts, Arsenal, defended with a 4-2-3-1.

Kane was supported in the final third by the runs infield and in behind being made by Lucas Moura and Son Heung-min; initially he was targeted by direct forward passes as he drifted to the left to occupy Ben White; Son, similarly, was targeted as he made direct runs in behind, but with Spurs spending lengthy periods in their mid and low blocks they too easily conceded possession when they did so.

Some regains were made in central territory, but they lacked energy and therefore offered too few attempts to penetrate forwards off the ball, or quick connections to and combinations with those closest to where those regains were made. Their attacks struggled without the necessary support, and were led by isolated attacking actions – Son's runs, or Moura withdrawing into deeper territory.

On the occasions they had lengthier spells of possession, Dele Alli and Moura rotated through the right inside channel, and Alli provided another attacking threat around Kane – mostly in the event of crosses. Moura's movements, similarly, created the potential for combinations around the efforts of Tanguy Ndombele and Pierre-Emile Hojbjerg to build play in central midfield; Ndombele and Hojbjerg also offered cover behind Spurs' full-backs, who advanced to provide their attacking width.

When Arsenal adjusted to defend with a 4-4-2 mid-or-low block, they succeeded in absorbing Spurs' attempts to build possession. The narrow positions adopted by Emile Smith Rowe and Bukayo Saka contributed to that; Spurs were instead forced to build around Arsenal's defensive block, after which they delivered mostly ineffective crosses.

Spurs, in turn, started to attack with a 4-2-3-1 in which Ndombele featured as their number 10, so Arsenal again adjusted to defend with a 4-1-4-1 mid-or-low block in which Thomas Partey featured at the base of midfield. Emerson Royal, who replaced Japhet Tangana for the second half, and Moura rotated towards the right; towards the left, Son attacked infield and Sergio Reguilón overlapped outside of him.

Regardless of Kane and Ndombele having increased space in which to receive, Son later featured as their 10, and Bryan Gil from the left. It was a combination between Reguilón and Gil that created their only goal.  Son drifting to the left, and Moura replacing him as their 10, gave Spurs an extra number towards the left as they continued to attempt to progress through Arsenal's increasingly low block, but a second goal eluded them.