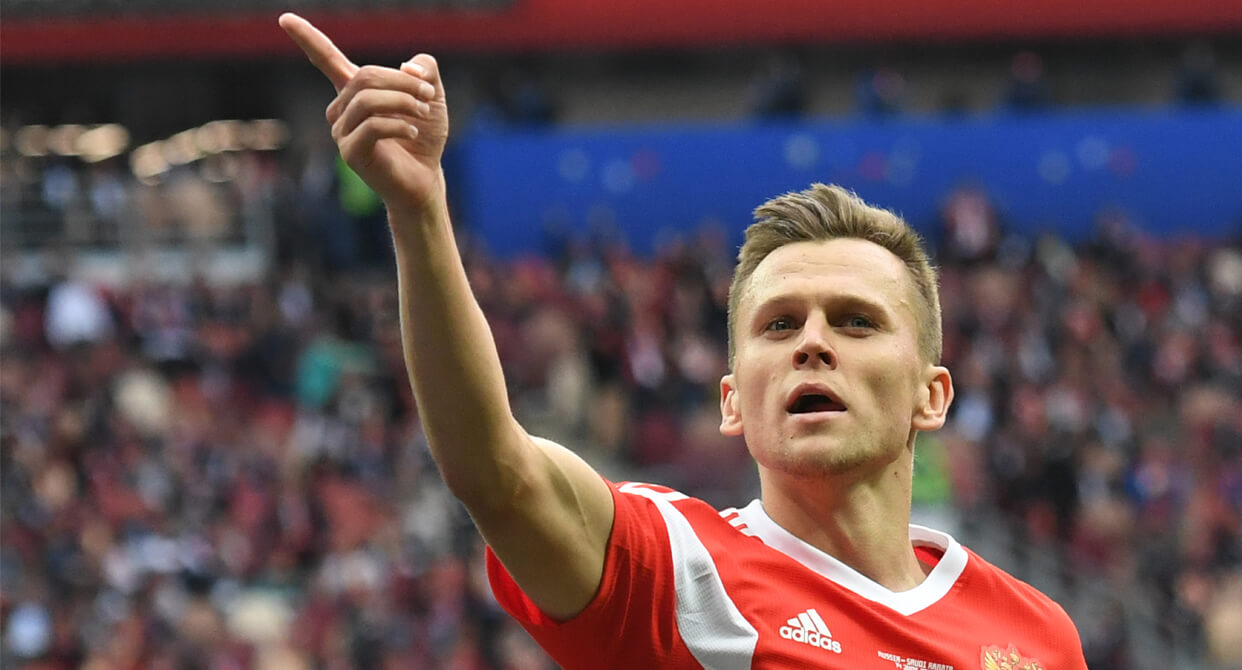 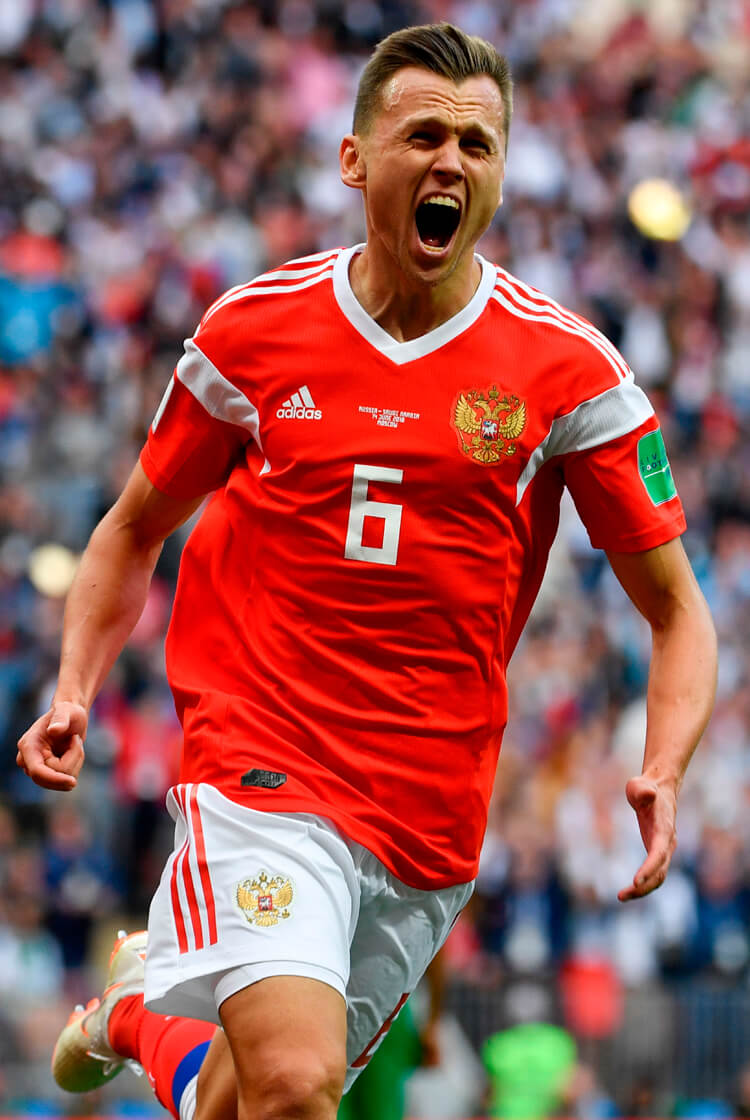 Premier League Watch
Despite a minimal Premier League presence on the opening day of the 2018 FIFA World Cup, Russia substitute Denis Cheryshev (above) will have gained plaudits after his two superbly taken goals helped the hosts to an emphatic 5-0 victory.

The 27-year-old’s first goal was well taken, as he faked a shot – fooling two helpless Saudi Arabia defenders in the process – and emphatically smashed home past goalkeeper Abdullah Al-Mayouf. His second was even better; after collecting a knockdown from the powerful striker Artem Dzyuba, Cheryshev exquisitely guided the ball into the top corner with the outside of his boot. A delicious effort.

Rarely for a Russian international, the Villarreal left-winger has never played domestic football outside Spain, having been out on loan at various La Liga sides from parent club Real Madrid before finally signing for his current club in the summer of 2016. His ability to drive down the outside of opposing full-backs has seemed an outdated trait in recent times, the modern trend being for wide players to cut inside and shoot. However, for teams such as Burnley, Crystal Palace, West Ham and Southampton – all of whom can operate with more traditional number nines who pose a real aerial threat – Cheryshev could make an ideal summer signing.

A common criticism of overseas wingers who come to the Premier League is their unwillingness to make frequent recovery runs. Cheryshev showed a genuine desire to track back and help his defensive unit, however – and this is a trait that Sean Dyche at Burnley particularly demands of his wide players. In his 73 minutes on the field, Cheryshev recovered the ball six times – an impressive figure for an attack-minded winger.

Russia’s long balls
The hosts game plan was fairly evident in the early stages of the first half. Once the initial furore had settled, Russia deployed multiple long balls to test the Saudi Arabian back line – and they maintained that tactic throughout, playing no fewer than 44 across the match.

That included 20 in the first half, of which 14 proved successful, before they improved to 20 completed long balls from 24 attempted in the second. No doubt the decision to bring on Artem Dzyuba as a 70th-minute sub helped their cause; the aggressive, powerful forward scored with his first touch but also contributed to a success rate of eight from nine long balls while he was on the pitch. He is certain to feature in Russia’s remaining group games.

Saudi Arabia’s ineffective passing
Despite having a larger share of possession – 59 per cent – Saudi Arabia were ineffective with the ball. They preferred to build with short passes from the goalkeeper, despite having two central defenders who struggle to play into congested areas. From their 592 attempted passes, 354 were inside their own half. Even if Saudi Arabia did manage to break into Russia’s half, they attempted only 84 passes, with just a single one inside the Russian penalty area in the entire match. If Saudi Arabia want to create any meaningful chances in their upcoming fixtures, they will need to utilise more penetrative forward passes during their build.

Russia’s ageing hero
Central defender Sergei Ignashevich, at 38 years old, was a surprise inclusion in the Russian starting XI. Despite age being against him, however, he dealt comfortably with the lone threat of Mohammad Al-Sahlawi. The veteran (above) won 11 out of 13 defensive duels and was also a solid asset when defending set-pieces, winning six of eight aerial battles. Making five ball recoveries and not losing possession once, he effectively covered his 24-year-old central defensive partner Ilya Kutepov whenever required to. There will be bigger tests to come, however.

Russia’s shifting defence
A notable feature within Russia’s defensive shape was how they alternated between a 4-2-3-1 and a 4-4-2 defensive structure. When they drop into a low block, Russia become very narrow, which naturally leaves spaces in the wider areas (above). Saudi Arabia moved their full-backs very high during the second half, but crucially lacked quick ball circulation when switching the play from one side to the other. The initial move usually started well, but slow passing across the Saudi midfield often enabled Russia to comfortably slide across with the ball.

Should Russia’s future opponents switch the play at a much quicker tempo, the hosts may struggle to contain a barrage of attacking crosses. One for Uruguay and Edinson Cavani to think about, perhaps.

Saudi Arabia’s lack of penetration
As Juan Antonio Pizzi only took over as head coach late in 2017, the Saudi Arabia players will still be adjusting to his demands and, in particular, his playing style. However, when in possession they must add more spark to their play. Quite often in international football, with chances much less frequent and the standard generally higher, not taking any risks in possession is the greatest risk of all.

The ability to split lines as a central defender is a difficult one to master. The risk of losing possession at the first opponent can be damaging. However, aimless possession between a centre-back pairing won’t help a team attack (above). Another option could be to drive forward with the ball, a defensive midfielder rotating out of midfield to cover should there be a loss of possession. The forward motion will activate an opponent presser, which usually opens up a gap to play forward through. Taking the game to the opponent is vital – the Saudi back line will need to be much more assertive in their next game.