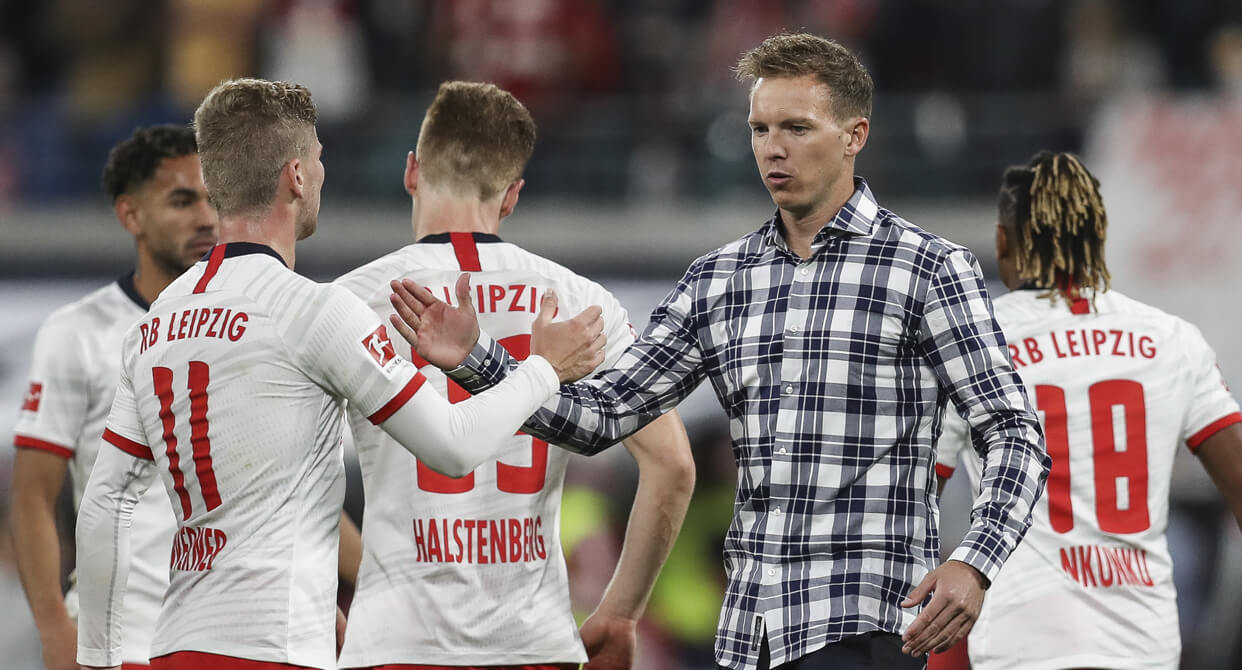 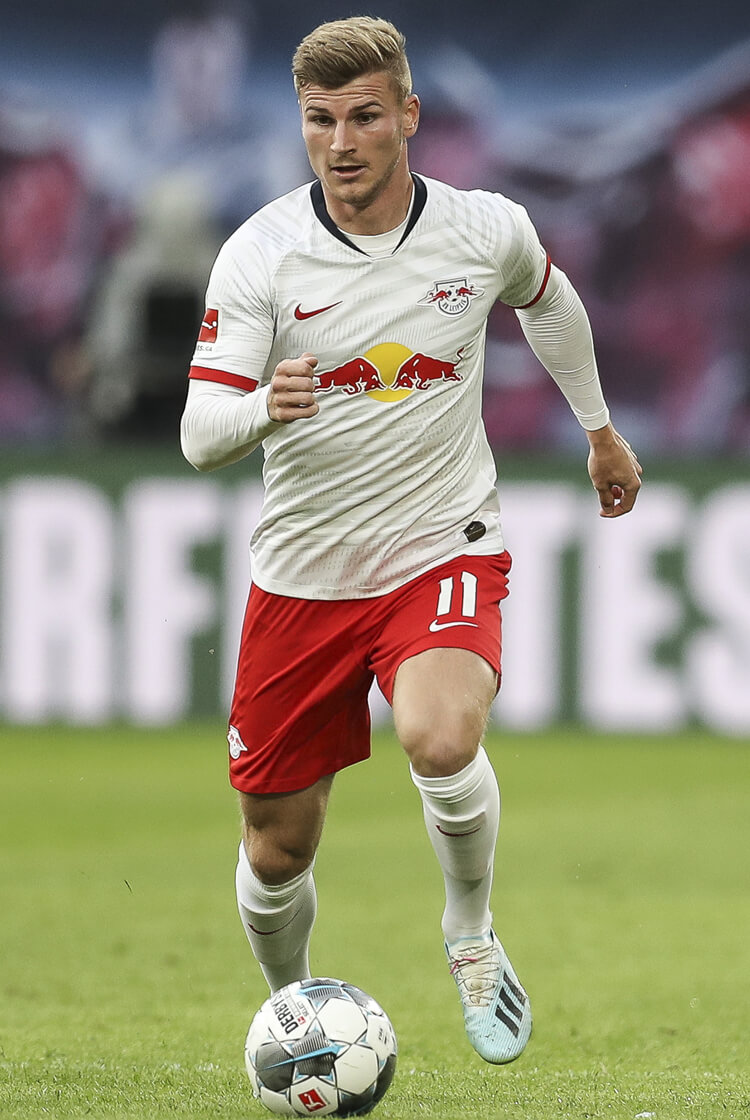 The group stages of the 2019/20 edition of the Champions League are upon us. In our Group G preview, The Coaches’ Voice experts have analysed the hopes of Benfica, Lyon, RB Leipzig and Zenit St Petersburg – and predicted who will finish where.

1st: RB Leipzig
RB Leipzig prepare for only their second taste of the Champions League group stages after finishing third in the 2018/19 Bundesliga. Two years ago, they finished third behind Besiktas and Porto in a tightly contested group before falling to Marseille in the Europa League quarter finals. French and Portuguese opposition await once more, but this season they look better equipped to progress.

As new head coach Julian Nagelsmann adapts and changes the structure of his sides almost on a weekly basis, central forwards Timo Werner and Yussuf Poulsen are key to Leipzig’s success. The duo scored 39 goals between them in all competitions last season – Werner got 20 to Poulsen’s 19 – and have continued their combined form into the new season.

Werner is the more versatile of the pair; he can lead the line on his own, combine in a front two, or play as a deeper inside forward operating from the left inside channel. Poulsen is more suited to the front line, rather than a deeper supporting role – but he is still quick enough to offer in behind. Both are superb finishers able to convert a variety of chances and calm in one-on-one situations.

Due to their well-timed movements, it is not uncommon to see the pair attacking alone in extremely underloaded situations. They work incredibly well together as they not only provide for one another with unselfish final-third play, but also offer multiple movements to relieve the pressure on the ball-carrier.

Poulsen also offers the option of more direct passes into the front line, where he competes well in the air against central defenders. This benefits Werner’s versatility; when he is deployed as a wider forward, his diagonal runs can link up with Poulsen’s aerial wins during the first contact. Even if the pass forward is disguised, or avoids Poulsen altogether, the Dane’s dragging of central defenders often disorganises an opposing back line (above). This allows Werner to reach top speed much quicker, as he curves his penetrative runs along the defence on the blind side of the full-back before moving central.

As long as Leipzig’s midfield continues to provide their penetrative forward passing, both Poulsen and Werner should create and score enough chances to secure their team’s first ever appearance in the Champions League knockouts.

2nd: Benfica
Benfica became Portuguese champions for a record 37th time last season, but they are currently coping with the loss of starlet João Félix, who moved to Atlético Madrid in the summer transfer window. The 19-year-old is by no means the first talented forward to leave the club in recent times – Raul Jimenez is now at Wolves, while Luka Jovic departed for Real Madrid after two seasons on loan at Eintracht Frankfurt.

In the absence of Felix, head coach Bruno Lage can instead look to his wide attackers. Benfica scored no fewer than 103 goals in their Primeira Liga campaign last season – 29 more than second-placed Porto – but 30 of those came from wide attackers Rafa Silva (17) on the left and the right-sided Pizzi (13). Both continue to support the front two in Lage’s preferred 4-4-2 shape, with new signing Raul de Tomas partnering last season’s top scorer Haris Seferovic.

Pizzi’s inside movements from the right often see him operate as a third forward behind the main two, allowing attacking right-back Andre Almeida to move into the resulting space and deliver crosses. Rafa Silva has tended to remain a more consistent presence on the left, but with Felix gone he is drifting inside and between the lines more often (above). With both central forwards looking to stretch and poach the spaces in behind, Pizzi and Silva often have larger spaces to shoot from distance, or drive forward and attack defenders with their direct yet effective dribbling and combination play.

Despite the loss of their star teenager, then, the Portuguese champions might just have enough quality and threat to progress into the last 16.

3rd: Lyon
Lyon, who finished third behind PSG and Lille in Ligue 1 last season, began last year’s Champions League campaign with an impressive away win over Manchester City. They then drew five straight group games before departing at the hands of Barcelona in the last 16.

In order to cover for these losses of personnel, Sylvinho has switched from Genesio’s preferred 4-2-3-1 to a 4-3-3 shape. New arrivals Jeff Reine-Adelaide, Thiago Mendes and Jean Lucas have all played around the more defensive-minded Lucas Tousart in midfield, as the new head coach looks to replace the contrasting qualities of Fekir and Ndombele.

Further back, Joachim Andersen is a new face in central defence, while Youssouf Koné has come in from Lille to replace Mendy at left-back. Koné’s final-third play may not be as penetrative as Mendy’s, but he crosses an earlier ball that allows top scorer Moussa Dembélé (above) to attack the spaces in behind. Koné also adds strength to the back line, where he is a better defender than Mendy. The extra security he provides means Lyon can set up with two number eights in midfield rather than the more defensive double pivot of last season. Whether they will have enough at the other end to qualify for the last 16, however, remains to be seen.

4th: Zenit St Petersburg
After claiming their sixth Russian league title in 2018/19, Zenit St Petersburg are back for their eighth campaign in European football’s biggest competition. Head coach Sergei Semak, in his second season in charge, has mostly used a defensively strong 4-4-2 structure – heading into the group stages, his team had conceded only four goals in nine league games.

A large proportion of Zenit’s attacking play stems through powerful central forward Artem Dzyuba (above). The 31-year-old moves into the spaces between opposing full-backs and centre-backs, which then becomes a key trigger for the back line – or a dropping central midfielder – to play direct passes into him. With Zenit setting up with two central strikers, Dzyuba often has support in close proximity; strike partner Sardar Azmoun provides penetrative runs in behind for flicks, or wider movements to drag defenders away and prevent Dzyuba being double-marked.

The wide midfielders often stay wide, rarely coming inside to assist their central midfielders. This maintains Zenit’s theme of quickly building into the front line, as Dzyuba usually moves across to offer support towards the left. The winger on that side offers additional support around the ball, usually moving in behind as Dzyuba drops away from the back line. The opposite winger will then move inside when Dzyuba is challenging for an aerial pass, with the deeper central midfielders too far away to support a second phase of play.

With the central midfielders often so deep behind the ball, any potential defensive transition can be dealt with, especially in the central lane. But if the full-backs move higher to support their wingers, the wider spaces around the central midfield could be an area of interest for Zenit’s Group G opponents.