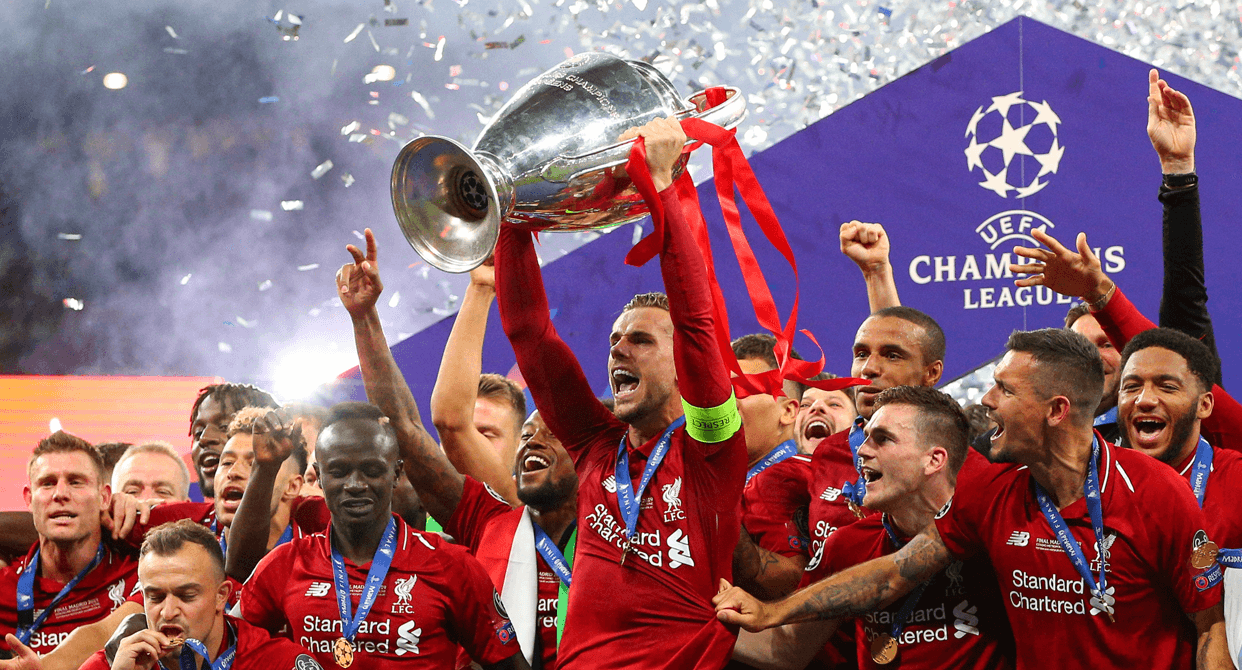 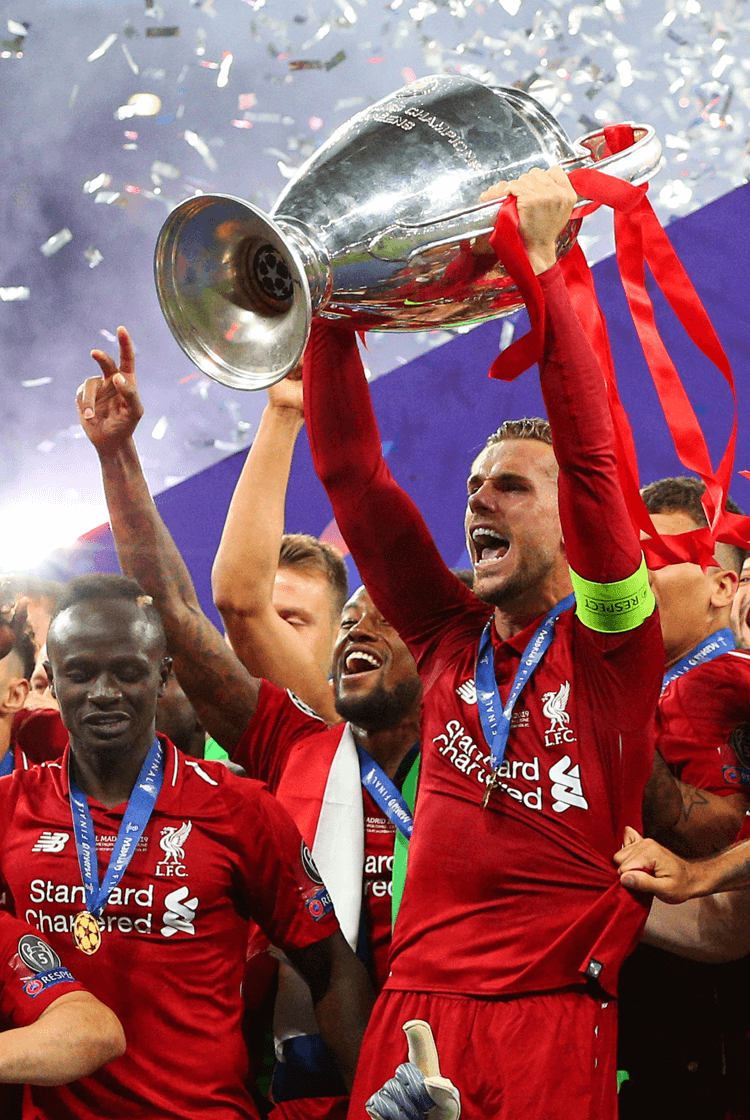 The group stages of the 2019/20 edition of the Champions League begin on Tuesday. In our Group E preview, The Coaches’ Voice experts have analysed the hopes of Red Bull Salzburg, Genk, defending champions Liverpool, and Napoli – and predicted who will finish where.

1st: Liverpool
Full-backs Trent Alexander-Arnold and Andy Robertson will surely be as important as ever for six-time winners Liverpool, but the increased quality of attacking build-ups witnessed in Europe’s elite competition means it is unrealistic to expect Jürgen Klopp’s team to maintain the same intense, high-pressing approach they consistently demonstrate in the Premier League. Away from home, Liverpool’s mid-block can be more defensive and see both full-backs being positioned deeper.

In last season’s competition, in which Liverpool struggled during the group stages, they were targeted around the sides, to disrupt the connection between full-back and central defender (above). They used a 4-3-3 formation to keep Mo Salah and Sadio Mané, who gradually moved inside as the season progressed, ready for quick transitions into attack, so both full-backs lacked support when defending.

This forced them to press higher, increasing the gap between them and the closest central defender. It was Virgil van Dijk who was forced to cover behind Robertson, but Klopp’s defence then lacked the strength that comes with being horizontally compact – and had to cope with their best defender not marking the most threatening opposition attacker. Even when their defence remained connected, and the full-backs didn’t jump to an isolated press, a direct ball in behind them sometimes brought similar success.

It was their undoubted quality in the final third, even when they were outnumbered, that ultimately inspired them into the round of 16. Liverpool’s improving control of possession also makes their defence increasingly difficult to target in the same way. As a result, it is hard not to see them winning the group.

2nd: Napoli
Napoli have invested heavily in their squad in an attempt to challenge Juventus for the Serie A title and avoid being eliminated at the group stage of the Champions League, as they were by Liverpool last season. Recruiting Kostalos Manolas when they already have Kalidou Koulibaly perhaps gives them the strongest defence in Italian football, and attacking midfielder Hirving Lozano (above) further strengthens an already fluid attack.

Carlo Ancelotti gradually moulded his team into a 4-4-2 from predecessor Maurizio Sarri’s long-term 4-3-3, and in doing so helped Polish striker Arkadiusz Milik benefit from playing in a front two alongside Dries Mertens or Lorenzo Insigne. The latter’s move into a central position meant they lost an influential attacker from the left, however; under Sarri, this was consistently where Napoli posed their greatest threat.

Mexican international Lozano is capable of reviving that, by encouraging Piotr Zielinski to remain in wider territory and replacing the creativity the Pole provided in central areas. Similarly, the width provided by José Callejón on the right means they require more support around Milik from the inside right channel, where Lozano is also capable of operating. If Ancelotti has superior defenders to those used by Sarri, combining Lozano with Insigne, Mertens and Milik may also give him an entertaining attack that is just as strong. It would be a major surprise if they failed to join Liverpool in the last 16.

3rd: Red Bull Salzburg
Moanes Dabour has left the Austrian champions for Sevilla, but they have not struggled to replace his goals. He is a fine number nine, but his play between the lines was limited; he instead remained as close to goal as possible for as long as he could.

Since Dabour’s departure, new head coach Jesse Marsch has given the 19-year-old Erling Braut Håland an opportunity he has seized. He is also proving a regular goalscorer, but unlike Dabour he withdraws to link play with his midfielders (above). His physicality also means he can occupy defenders while protecting possession for delayed supporting runners, encouraging Marsch to continue to play with a front two and towards a striker who relishes withdrawing to combine.

Håland looks to receive close to goal, but is comfortable doing so in front of the opposing defence – particularly between the left-back and left-sided central defender, from where he can shoot powerfully at goal. He also enhances Salzburg’s attacking transitions by linking play with supporting runners or carrying possession with speed. His penetrating, direct dribbles give his team a dimension they previously lacked, although it is unlikely to be enough in a group featuring two relative European heavyweights.

4th: Genk
During a summer in which Genk lost Leandro Trossard to Brighton, they also recruited the exciting Ianis Hagi, son of Romanian legend Gheorghe. He can play in multiple attacking positions, but his most natural role is through the centre, and in a team often set up into a 4-2-3-1 or 4-3-3.

The 20-year-old Hagi (above) – he turns 21 in October – regularly receives passes in a vertical line, which can limit his ability to take a first touch towards goal. But when pressure then comes from directly behind him he can attack to either side and dribble past his defender. He always plays with the intention of progressing the ball forward – usually via a dribble rather than through a combination of passes.

When deployed as a number 10, Hagi is increasingly creative. There, he can receive and drive straight at opposing defences, thus freeing up runners. If playing as a number eight in a 4-3-3, his enthusiasm leads to him taking unnecessary risks and making less progress with the ball. He is regardless showing signs of maturing and varying his attacking approach, and thus linking better with his teammates as he approaches his first season in a tournament his feted father never won.