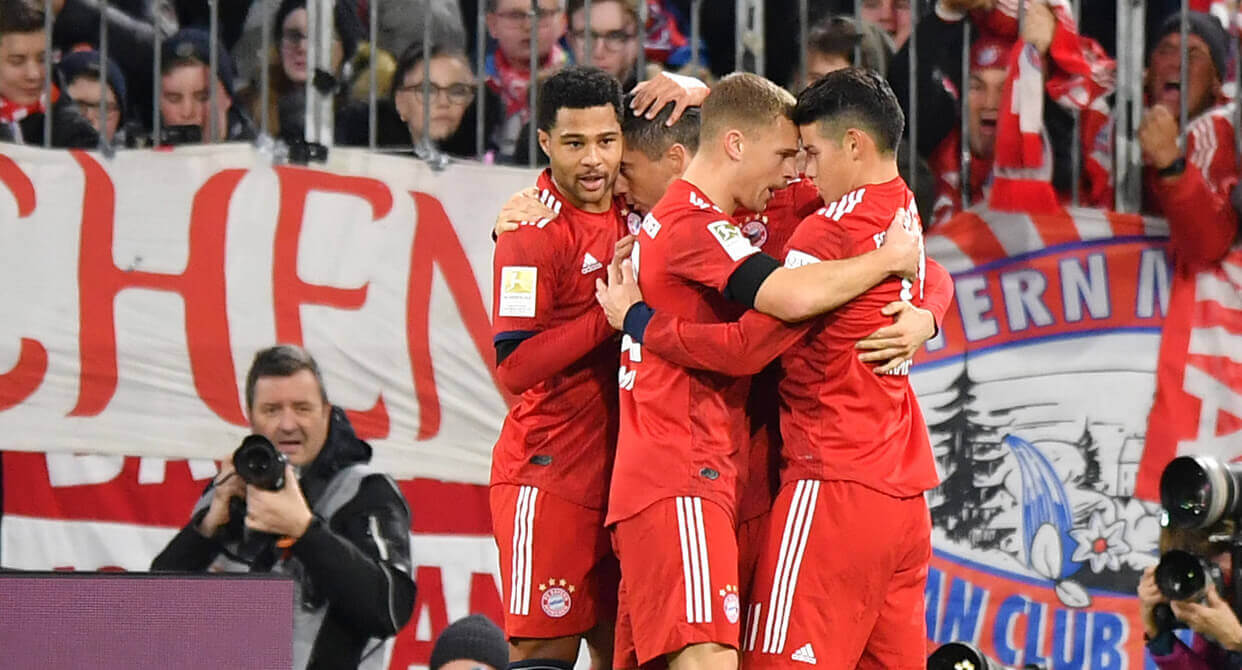 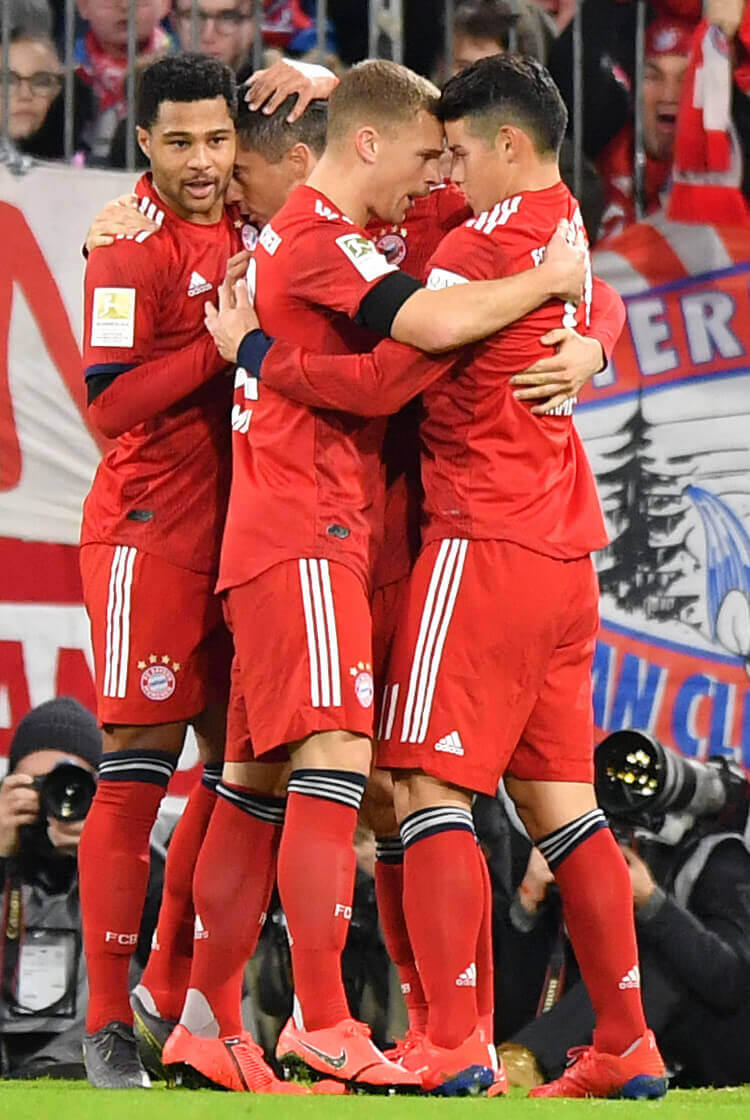 Story of the group stage
German giants and five-time European champions Bayern Munich finished top of Group E, remaining unbeaten across their six games to see off Ajax, Benfica and AEK Athens. Only PSG and Manchester City scored more than their 15 goals, with their goal difference of +10 matched only by Pep Guardiola’s team.

Polish striker Robert Lewandowski (below) contributed heavily to Bayern’s success, his eight goals making him the tournament’s top scorer. Neither Lewandowski nor any of his teammates scored from outside the area, however – a fact perhaps explained by the German champions’ patient approach and preference to attack with crosses into the box. Bayern are particularly strong both with and without the ball in wide areas; they attempted 123 balls into the opposition box in the group stage, while conceding only 15 corners – the fewest of any club.

Against Liverpool, they will have to be at their best in all areas of the pitch, although there is little recent form to go on. The two teams haven’t met since the 2001 European Super Cup final, when John Arne Riise, Emile Heskey and Michael Owen scored in a 3-2 win for the Reds in Monaco. Liverpool manager Jurgen Klopp does have much more recent history against Bayern, of course – he was in charge of the Borussia Dortmund team that wrestled the Bundesliga title away from Munich in 2011 and 2012, before losing to them in the 2013 Champions League final.

Attack
In his first season in charge at Bayern, head coach Niko Kovac (below) has so far in Europe alternated between a 4-3-3 and a 4-2-3-1 structure. Due to the quality of the players available to him, the Croatian can change relatively easily from a possession-heavy strategy into a transitional approach. Bayern had the majority of possession in five of their Group E matches – the only exception, perhaps not surprisingly, was the 3-3 draw at Ajax with which they finished their group campaign.

No matter what strategy they adopt, the ability to create and score from wider positions is still a key aspect of Bayern’s attacking play. Of their 10 group-stage goals in open play, no fewer than eight stemmed from wide penetrations into the final third. Whether they come from the veteran wingers Arjen Robben or Franck Ribéry cutting back inside, or a late overlapping run from a full-back or central midfielder, Bayern still have deadly quality from out wide.

The majority of their final-third play does involve some form of overlapping run, and the use of wrong-footed wingers – Robben and Ribéry in particular, of course, with youngsters Serge Gnabry and Kingsley Coman their long-term replacements. However, the variety of overlap can depend on which style the team adopts. In a more possession-based approach, the overlaps are often provided via bursting runs from their full-backs, with the likes of David Alaba, Rafinha (below, against AEK Athens) and Joshua Kimmich all relentless runners capable of then putting composed crosses into their front line.

Should Bayern look to attack quickly on the transition – a common theme in Kovac’s career as a head coach, both in Munich and before – then supporting overlaps from central midfielders such as James Rodriguez (below, against Benfica) or Leon Goretzka can provide similar chances and outcomes, without necessarily risking the expansion of the back line.

The skill of Bayern’s attacking play in wide areas stems from their ability to adapt to their opponents’ defensive strategy. Should opponents track the overlapping runner, then the quality of their ball-striking comes into play. Both Robben and Coman have this season scored crucial goals from wide by exploiting the space inside, and then accurately shooting across goal – Robben has made a career out of this, of course.

Equally, if defenders press the ball and block off any inside path to goal, the timing and movement of Bayern’s overlaps become a huge threat. Carefully choreographed and timed to provide the best passing angle in behind, these runs set up crosses into the best areas possible for the central attackers.

Defence
Bayern use a 4-4-1-1 or a 4-4-2 defensive structure without the ball (below), and prefer a mid-block strategy. Key triggers often dictate how aggressively they press. Elements of counter-pressing are evident within Kovac’s midfield and attacking units; again, these are trigger-based, with his players pouncing on any slow pass or bad first touch as a priority.

Bayern’s overall defensive record in this year’s Champions League is reasonably sound – remove the four goals Ajax scored across two draws, and the only goal they conceded was in a 5-1 demolition of Benfica. They faced only 22 shots on target across all six games.

Their attacking dominance in wide areas is interestingly replicated without the ball, as 60 per cent of their successful tackles in the group stage came on the flanks. Note how hard their forward players – in the example below, Lewandowski, Ribéry and Goretzka – work to regain possession in these areas in particular.

As you would expect from a team not leading the Bundesliga, Bayern do have their vulnerabilities – and the current crop struggle against players combining or dribbling centrally in the final third. Horizontal movements from central strikers can easily pull their central defenders away from the ball, creating enhanced central spaces for ball-carriers (below).

Neither Mats Hummels nor Niklas Sule are particularly quick (Jerome Boateng misses the first leg at Anfield), especially when facing the ball and then having to turn and accelerate. They will often follow their man rather than having to face off in a footrace they would expect to lose.

Getting at Bayern in this way does require extremely unselfish movements from central forwards, or intelligent positional rotations between attackers. Which brings us on to their opponents in the last 16…

Against Liverpool
A first-leg trip away to Anfield is daunting for any team still left in the competition. When Liverpool are at home on a European night, they turn into a completely different animal – as both Paris Saint-Germain and Napoli found out in the group stages. However, the hosts will be without the suspended Virgil van Dijk for the first leg – and, with both Joe Gomez and Dejan Lovren out of action, a likely Liverpool back line built around Joel Matip and Fabinho starts to look more vulnerable. The Germans are missing key men of their own, with Boateng joined on the sidelines by the suspended Thomas Muller, who was sent off against Ajax.

A Bayern win over the two legs will see them move into the quarter finals of the Champions League for the eighth successive season, and how they attack Klopp’s men will go a long way to deciding who progresses. With Liverpool fielding a makeshift central defence and perhaps a rusty Trent Alexander-Arnold at right-back, the emphasis will be on left-back Andy Robertson to support from the back line. Should Bayern set up in a 4-2-3-1 structure, the mobility and support of Goretzka from deep could prove important, especially when supporting Bayern’s right-sided attacks.

Attacking quickly and directly in behind Robertson during moments of transition could enable Bayern to penetrate from their right, with Goretzka providing overlaps for Robben or Gnabry to cut inside ahead of him. Klopp’s use of a false full-back could reduce this threat, but subsequently open up the central lane for deeper supporting runs from someone like Rodriguez.

Alternatively, Bayern could adopt a more defensive 4-2-3-1 structure, aiming to block off their weaker central lane – in which case, where Klopp chooses to deploy Mo Salah (above) would be of huge interest. Starting the Egyptian on the right, from where he can move back inside and dribble with the ball, could prove a useful method of attack for Liverpool – particularly with the runs of Roberto Firmino and Sadio Mane capable of dragging Bayern’s central defenders away from Salah’s potential path towards goal.

Neither team go into the first leg with their defence at full capacity. How they both cope with the threats in front of them could determine which way the game – and potentially the whole tie – goes.