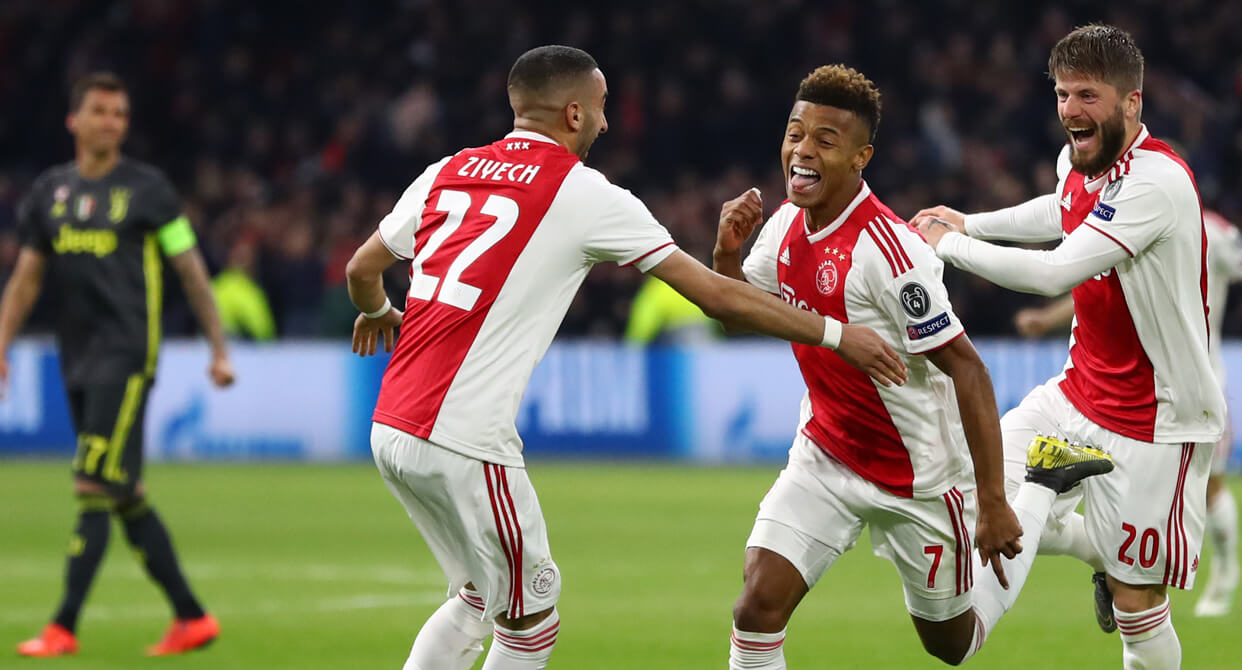 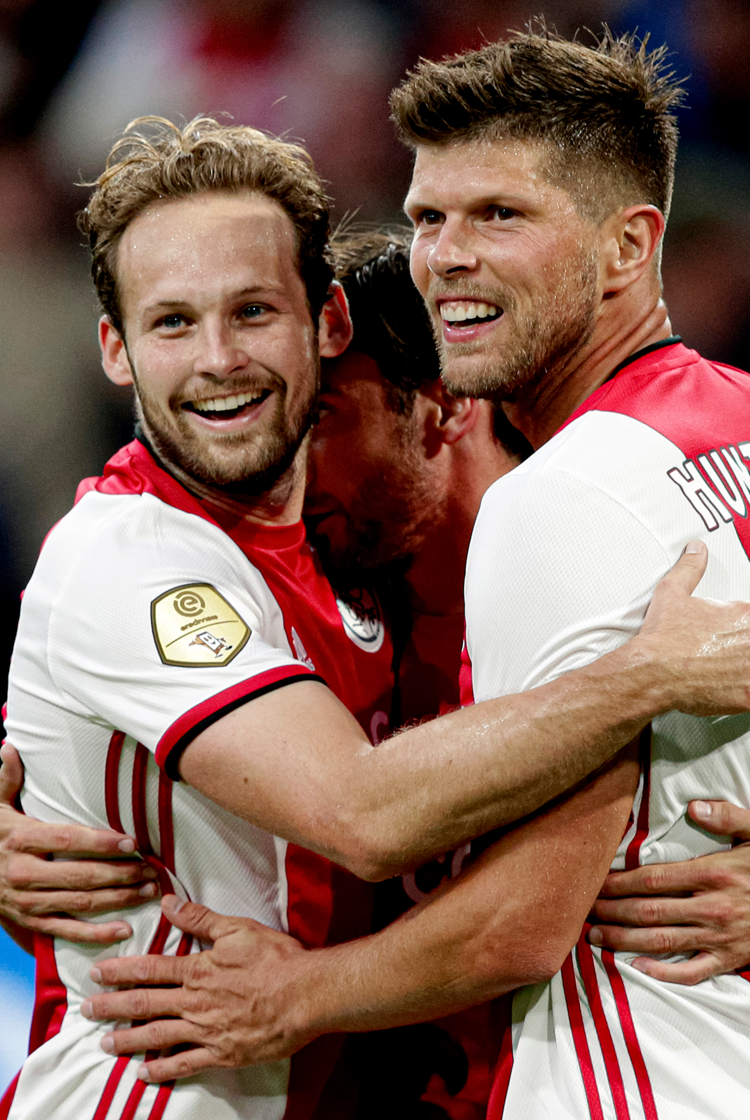 Route to the last four
Three of the four semi-finalists in this season’s Champions League were actually group runners-up, but while both Tottenham and Liverpool have at times ridden their luck on their way to the last four, there is no doubt who the surprise package of the tournament has been. Ajax may have a long and illustrious European Cup history, but the Dutch side have this season become the first team in history to reach the semi finals after coming through three rounds of qualifying.

Come-from-behind wins over Real Madrid in the last 16, and Juventus in the quarter finals, have given rise to the possibility that Erik ten Hag’s little-fancied team could become the fifth Ajax side to lift the continent’s biggest club trophy.

A semi final against Tottenham Hotspur – themselves in the European Cup’s final four for the first time since 1962 – pitches them against former players Toby Alderweireld, Jan Vertonghen, Davinson Sanchez and Christian Eriksen. Young Dutch stars Frenkie de Jong, who joins Barcelona in the summer, and 19-year-old captain Matthijs de Ligt tend to steal the headlines, but what are the key things to know about the first Ajax team to go so deep in Europe for more than 20 years?

Attack
After becoming Ajax’s head coach in December 2017, Erik ten Hag (below) initially set his team up in a 4-3-3 structure – but in his first full season he has focused more on the 4-2-3-1 shape seen through most of this compelling Champions League run. The double pivot of the experienced Lasse Schone and the youthful but exciting Frenkie de Jong is key to the way they operate – between them, the pair have attempted almost a quarter of the team’s passes in the tournament to date.

Ajax’s expansive style of attacking football certainly comes from ten Hag, who was head coach of Bayern Munich II – essentially, the Under-23 team – while Pep Guardiola was in charge of the first team. They have scored in all five of their away games from the group stage onwards, including four when dumping Real Madrid out at the Bernabeu and another two when ending Cristiano Ronaldo and Juventus’ hopes in Turin.

They possess a squad of players who are comfortable with the ball deep in their own half. As a result, they can push multiple players higher, far ahead of the shorter build. One of the Schone-de Jong double pivot will drop into the back line, thus pushing the full-backs higher; regular left-back Nicolas Tagliafico in particular provides real attacking width outside a tight central attacking unit (below) that causes opposing central defenders major problems. It is almost impossible to consistently mark and track any dropping movements from the normal front four of Dusan Tadic, Donny van de Beek, Hakim Ziyech and David Neres.

Whenever gaps open in front of them, the deeper midfielders increase the tempo and look for splitting combinations to break through any congested block. Even if opponents do sit back, Ajax remain patient with the ball, and search calmly for a better way through on goal. Only one of their 19 goals from the group stage onwards – a looping Schone free-kick against Real Madrid – has been scored from outside the opposition penalty area.

Ziyech, who usually operates from the right of the attacking midfield three, is perhaps the one Ajax player who lacks the patience of the rest. His 47 attempts on goal from nine matches from the group stages on is the highest by any Ajax player by a mile – Tadic and van de Beek are next, with just 17 – and has to date produced only two goals. The Moroccan’s attempt at the end of an impressive team move with the tie level against Juventus in the last round (below) bears witness to this occasionally poor decision-making; with players in support and a number of defenders blocking goal, he still chose to shoot from distance. He is far better suited to running in behind and attacking from wide, or hanging back for cut-backs.

Defence
Without the ball, Ajax’s 4-2-3-1 becomes clearer when in a mid-low block; both full-backs naturally move into the back line, while de Jong and Schone screen the central defence (below). Despite their desire to regain possession, Ajax have rarely won it high up the pitch in this season’s Champions League. They have regained possession 699 times in 10 matches, but less than one-tenth of these regains occurred in the final third.

That won’t stop them pressing higher, however, with their compact front four ideally positioned to initiate counter-presses after a loss of possession. Relatively few high regains to this point doesn’t mean their high press is either poorly co-ordinated or ill executed. Because of the intensity and volume of Ajax’s higher pressing players, European opponents have adapted to playing longer, more direct passes out of their defensive third. This naturally reduces the amount of time the ball is there to be won, with more regains thus taking place closer to their own goal.

Interestingly, Ajax boast the highest number of fouls committed (137) of the four remaining teams in this year’s Champions League. This pressing intensity helps disrupt opponents’ build-up play, which could prove a key factor over the two legs of their semi final against Tottenham.

One final point of interest is that this is a team that likes to build from goalkeeper Andre Onana but still commit many bodies high up the pitch. This can leave a large space between their units, which can in turn lead to counter-attacking opportunities for opponents (above). Ajax have only a 54 per cent level of accuracy via longer passes from their defensive third; opponents simultaneously block their short passing options, but also move the back line to squeeze any longer passes out from the back.

The task facing Tottenham
Mauricio Pochettino will be without some big names for the first leg of the semi final, with Harry Kane still out injured and Son Heung-min suspended, while the increasingly influential Moussa Sissoko also remains a doubt after picking up an injury against Manchester City in the quarter finals.

Getting Ajax to play longer balls from deep could become a key source of creation for Tottenham, as their quick play after a regain certainly helped defeat Pep Guardiola’s all-conquering team over the two legs. Pochettino will have to carefully balance the number of players he sends forward to block shorter builds, without compromising the defensive stability required to battle for possession after any resulting longer passes. Fluid movements after a regain from the likes of Dele Alli, Christian Eriksen and Lucas Moura will all be crucial to the team escaping Ajax’s aggressive counter-press.

Ajax are certain to continue their 4-2-3-1 structure (above) but with usual right-back Noussair Mazraoui an unlikely starter, the Dutch side’s central attacking players will have to carry their team forward. Ziyech might move wider than usual to compensate, which might give Spurs one less threat to worry about in the middle – where they have the option of fielding three former Ajax centre-backs, should Pochettino wish to push his full-backs into more advanced positions throughout.