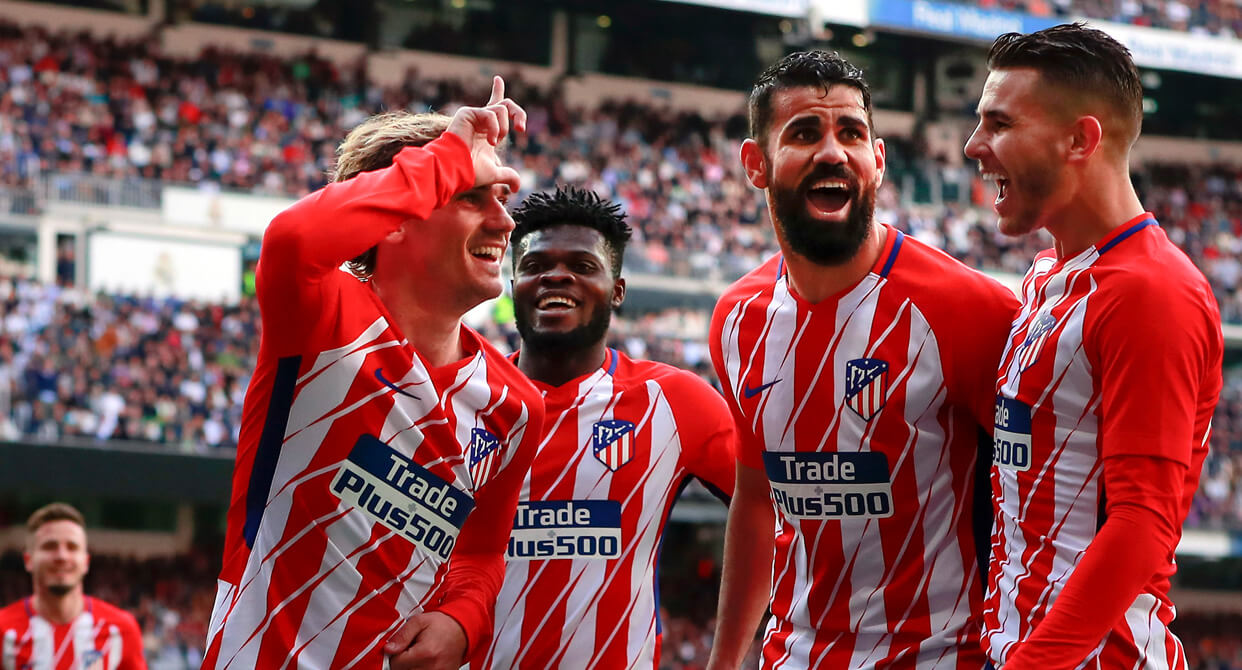 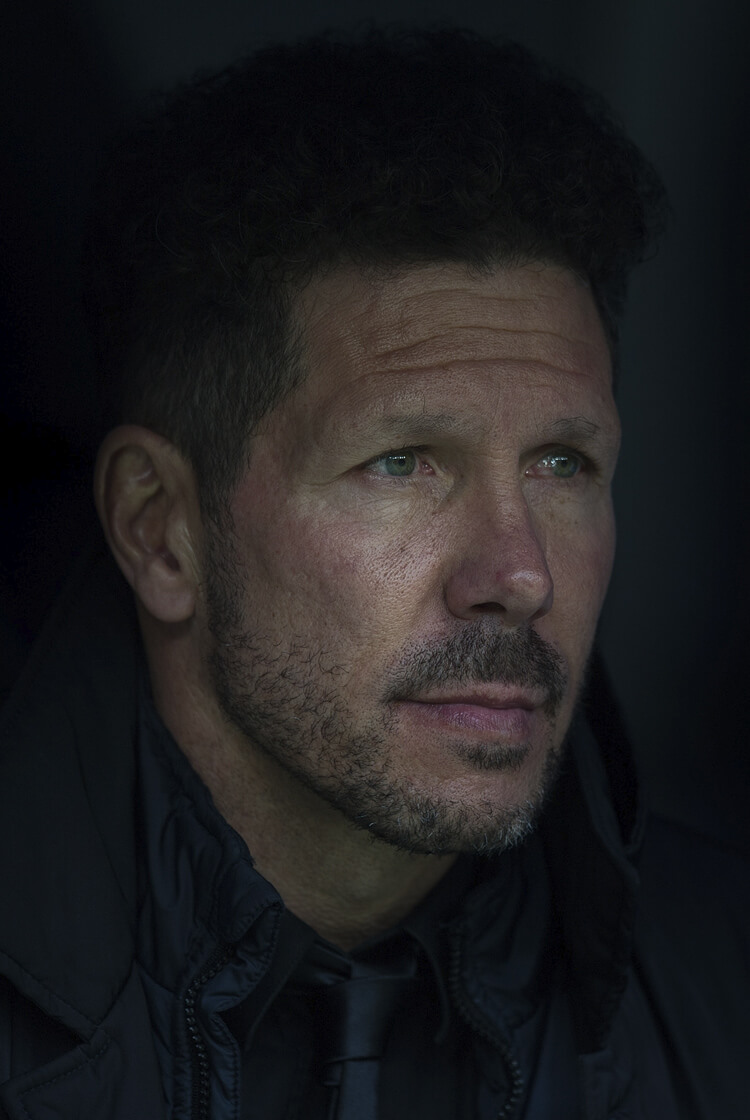 Qualifying route
Atletico began the season in the Champions League, but dropped out in the group stages. Despite only losing once, and conceding just four goals in total, they managed only one victory – at home to AS Roma – and duly exited behind the Italians and Chelsea.

Diego Simeone’s men stormed through the early knockouts of the Europa League, with convincing aggregate victories over FC Copenhagen and Lokomotiv Moscow. They met Sporting Lisbon in the quarter finals, running out 2-1 winners after a comprehensive 2-0 victory in the first leg.

After escaping with a 1-1 draw from the first leg at the Emirates (below), Atletico will be favourites to progress to what would be a fifth European final in nine seasons. They are a top defensive outfit, especially at home, where they will look to keep a fifth consecutive home clean sheet in Europe.

Atletico Madrid 1 Chelsea 2
After an opening 0-0 draw in Rome, Atletico needed a positive result from their first ever European appearance at their new home stadium.

Chelsea started the brighter, with Eden Hazard smashing a long-range strike against the post and Alvaro Morata testing out Jan Oblak with multiple attempts. Despite intense pressure from the away side, Atletico went ahead late in the first half.

Chelsea’s dominance continued in the second half, as Morata headed an equaliser from Hazard’s cross. In the dying moments of the game, substitute Michy Batshuayi tapped home a winner, again from a cross. It was Atletico’s first home defeat in Europe by an English team, and set the tone for a disappointing Champions League campaign.

Atletico Madrid 2 Sporting CP 0
Atletico got off to the most perfect start possible in this Europa League quarter final. Diego Costa pounced on an early defensive error and slipped the ball through to Koke (below), who finished low into the bottom corner.

Sporting did threaten with some quick attacking transitions, but Antoine Griezmann latched on to another error from the visiting defence to give his team a commanding two-goal lead. Diego Costa squandered a further chance for the home side, but so did Fredy Montero for Sporting, as Atletico took a clean sheet into the second leg.

After struggling for goals in the Champions League, Atletico have scored 16 goals in seven Europa League knockout matches.

Jan Oblak
Goalkeeper, 25
This is Oblak’s third season as Atletico’s first-choice goalkeeper. Inheriting the position from former Chelsea loanee Thibaut Courtois, the Slovenian (below, left) had big gloves to fill as he tried to establish himself behind one of the most effective defences in club football.

Oblak’s weakest area is dealing with crosses – particularly those driven into the six-yard area at pace, which he rarely looks to claim or punch, instead leaving them for his central defenders. He is a fine shot-stopper, however, capable of saving close-range efforts with both feet and hands.

Saúl
Midfielder, 23
The Spanish midfielder (above, right) has made 51 appearances for Atletico this season. Predominantly, he is a central midfielder who looks to attack high up the pitch, often accompanying the strikers. As with most Spanish midfielders, he is flexible across the midfield unit, and can be used in a wider role if needed.

Still only 23, he has wonderfully fast feet and is very good in tight areas, whether maintaining possession or beating an opponent. His main attacking asset is the timing of his forward runs. He is a threat in and around the penalty area, popping up with useful European goals away at Chelsea, Copenhagen and Lokomotiv Moscow this season.

Defensively, he is effective when accompanied by teammates in a compact block. One against one without the ball, however, he can be exploited – particularly when deep inside his own half.

Antoine Griezmann
Forward, 27
Griezmann is Atletico’s main attacking threat. The French forward is their leading scorer in all competitions this season, with 27 goals. Of these, 23 have come from inside the penalty area, with 21 first-time attempts.

The 27-year-old often moves short in possession, dragging markers out of position and assisting with the build-up play. Despite this, he will always get himself into goalscoring positions, ready to finish moves off inside the penalty area.

As Atletico often use a deep defensive block, Griezmann is required to track back, blocking opposing forward passing options. As he’s a very attack-minded player, however, he will often let his runner go without making a recovery run. This could be exploited with late runners from deep into Atletico’s penalty area.

Diego Simeone, 48
Simeone (above) is in his seventh season as manager at Atletico. Having retired from playing in 2006, he had a sequence of brief managerial spells at various clubs in his native Argentina, and with Catania in Italy. He only managed to reached the 50-game landmark once in that period: with Estudiantes in 2006/07.

He took over at Atletico in December 2011, succeeding Gregorio Manzano. In his first season in charge, he guided Atletico to Europa League success, beating Spanish rivals Athletic Bilbao 3-0 in Bucharest.

In the following three years, Simeone brought in various silverware as Atletico won global plaudits for challenging the established order of Real Madrid and Barcelona in Spain. They clinched the domestic title on a dramatic final day of the 2013/14 season, securing the draw they needed in the Camp Nou. Real denied them a historic double by defeating them in the Champions League final a matter of weeks later, and then repeated the success over their city neighbours two years later.

Simeone is a manger who demands hard work from each individual. His teams are aggressive and mentally tough. This combative nature is ideal for applying heavy pressing on to opponents. If there is a slight hint of disorganisation, however, individuals can press alone. This can leave gaps to exploit, particularly in wide areas.

The Argentine coach has used a 4-4-2 structure for every game in Europe this season. He encourages his midfield to attack centrally, often overloading the spaces between the opposition’s defence and midfield. Simeone has shown he can study opponents at great length, and create effective game plans accordingly. His Atletico side are comfortable in producing a consistently low defensive block, coupled with direct counter-attacks. They can also control the tempo of the game if needed, building through the thirds with longer periods of possession.

Defensive core
Atletico are renowned for their defensive core – they have conceded only eight goals in 13 European matches this season. They set up with a defensive back four, which is usually assisted by an additional block of four in midfield. They have excellent concentration and the ability to remain defensively sharp for lengthy spells.

The midfield unit look to remain compact when defending for prolonged periods. The wide midfielders will tuck inside, especially if their opponents play with three central midfielders – in a 4-3-3 formation, for example. This will leave spaces in wide areas, as Atletico's full-backs will continue to aggressively press on both sides.

Gaps will therefore be available in between the full-backs and centre-backs for opponents (see above), as Atletico have been exposed with forward runs in behind these spaces. Of eight goals conceded in Europe, seven have originated from crossing situations.

Attacking build-up
Despite getting mainly defensive plaudits, Atletico can pose various attacking threats. As they are so effective sitting in a mid or low defensive block, naturally they have ample experience of effective attacking transitions.

Atletico look to set up to include at least one wide midfielder who possesses high levels of acceleration and speed. However, after the recent departures of Nico Gaitan and Yannick Carrasco to China, Simeone has less attacking speed than he may require. Angel Correa is his main threat in wide areas, in this regard.

Both of Atletico’s full-backs often push high during longer spells of possession. They provide attacking width and can deliver effective crosses, often searching for the power of Diego Costa or, later on in games, Fernando Torres.

Atletico are more than capable of adapting their attacking approach to take advantage of any obvious weakness in their opponents. In the last-16 ties against Lokomotiv Moscow, they demonstrated completely different attacking approaches. In the first leg at home, Atletico were much more direct in possession, efficient with the ball while solid enough not to concede. All three of their goals came from moves that featured no more than three passes.

Compare this to the away leg, where Atletico built with patience, happy to take their time with the cushion of a three-goal lead. Despite building with more possession, and in a less energetic manner, they still scored five goals – three of which came from moves featuring 10 or more passes. If needed, Atletico can hold their own with the ball, remaining patient while building through the thirds.

More recently, Antoine Griezmann, Kevin Gameiro, Diego Costa and Fernando Torres – the latter pair both in their second spells at the club – have led the line. In European competition this season, Griezmann has been supported in attack by Gameiro, with the others contributing mainly from the bench.

In possession, the wide midfielders often move central, adding to the two strikers. Griezmann (above, right) has the biggest range of movements, and will look to come short to the ball as well as running in behind. The other strikers will provide maximum height, looking to pin back opposing central defenders.

Along with the wide midfielders moving inside, an additional central midfielder will look to centrally support high up the pitch. In Europe, Atletico have often deployed four or five central attacking options at once, looking to overload the gaps in between opposing defensive and midfield units.