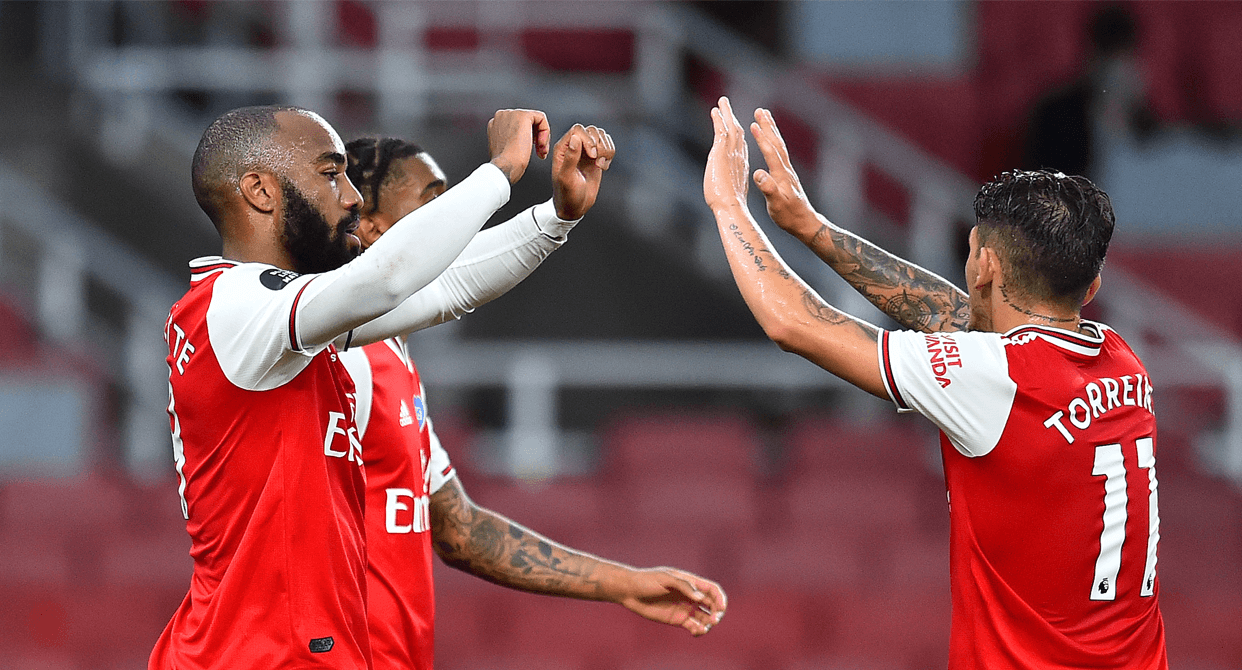 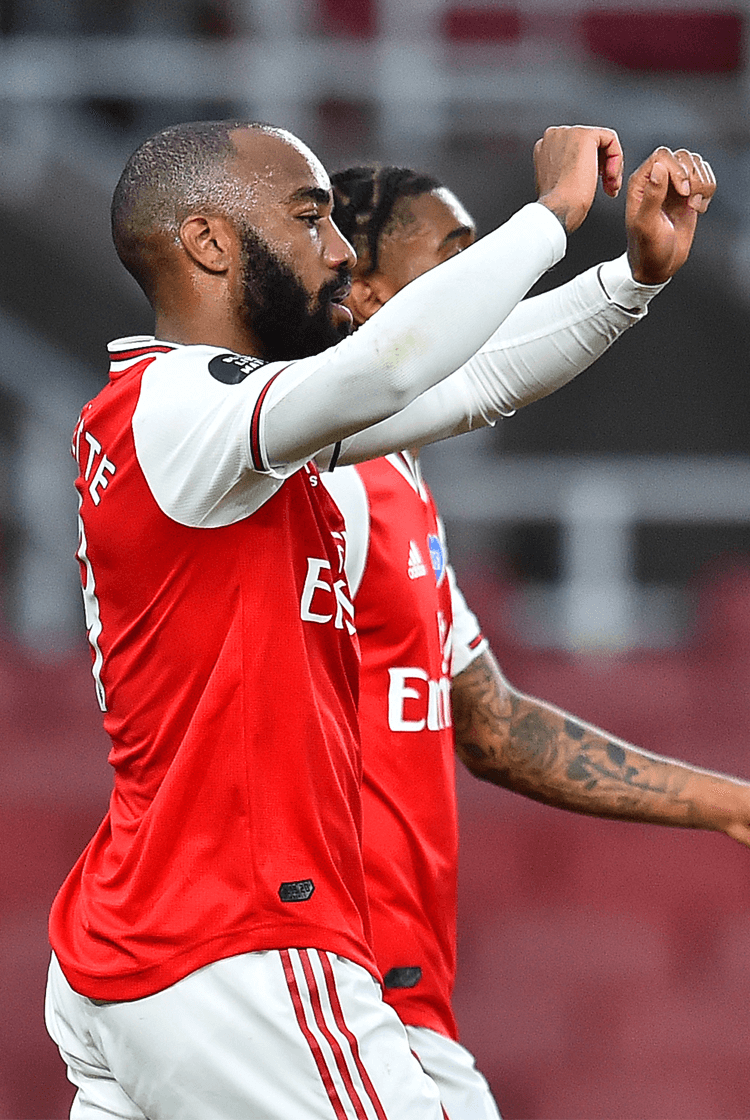 Arsenal ended Liverpool's hopes of setting a new Premier League points record when they recovered from a goal down to secure a victory that keeps them in contention to finish higher than rivals Tottenham. Sadio Mané's 20th-minute finish put Liverpool on course to reach 96 points before their final two fixtures of 2019/20, but uncharacteristic mistakes from Virgil van Dijk and Alisson – both key figures in them so impressively winning the league – led to goals for Alexandre Lacazette and Reiss Nelson, and ultimately their third league defeat. Manchester City's total of 100 points, set in 2017/18, remains a divisional record. "We have to learn from it," said their manager Jürgen Klopp. "We've had sloppy moments before and not been punished for it but this is good because we have to learn from it. Credit to Arsenal for being there and using it." 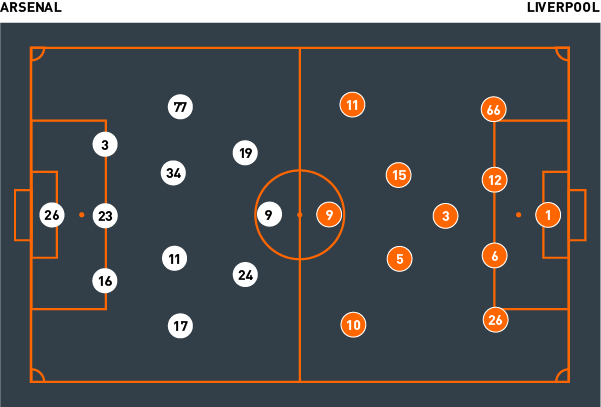 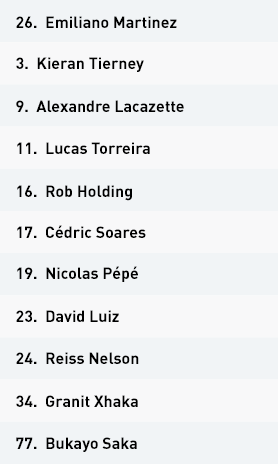 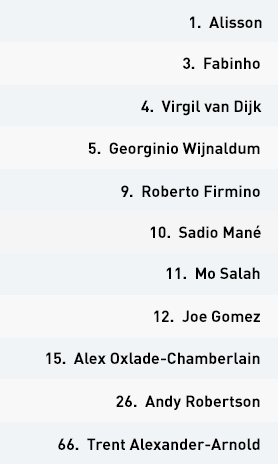 Mikel Arteta retained a back three for the visit of Liverpool, opting for a 3-4-3 formation in which Alexandre Lacazette dropped very deep from his centre-forward's position, and sometimes offered passing options directly from defence. Nicolas Pépé – who started on the left – and Reiss Nelson then moved inside of Liverpool's full-backs, hoping to take advantage of spaces in the inside channels.

With Lacazette so deep, however, Arsenal lacked the numbers required to pose a threat beyond Liverpool’s midfield. The visitors played with a high defence, which condensed the space behind their midfield and, alongside their intense pressing, Arsenal couldn't work their way through the high block Liverpool used from their 4-3-3. Arsenal therefore tried to play longer passes into the spaces in behind, but they couldn’t time their runs, and Liverpool remained untroubled.

Liverpool pressed with Mo Salah and Sadio Mané moving inside to put pressure on David Luiz – positioned in the middle of Arsenal’s back three – or Emiliano Martínez, forcing the hosts into rushed decisions in the first passes of their build-up. Arsenal’s double pivot in central midfield outnumbered Roberto Firmino, but their bounce passes to their central defenders lacked tempo, and Liverpool’s number eights forced play back towards the corner flags. Arsenal then played long – rather than targeted – passes, but Liverpool’s central defenders dominated aerially.

Despite Liverpool’s dominance, Virgil van Dijk’s mistake under pressure from Nelson gifted Arsenal their first goal. Fabinho had withdrawn to between their central defenders, so Lacazette was able to block a pass to Georginio Wijnaldum in midfield while also remaining in pressing distance of Fabinho. With Pépé and Nelson cutting off any route to Liverpool's full-backs, Arsenal had managed to successfully work a trap to regain possession and they took advantage; Van Dijk’s uncharacteristic nonchalance in possession was also unquestionably influential.


Arsenal scored a second goal from further high pressing, when Nelson moved from Van Dijk and on to Alisson when Lacazette was still screening Fabinho. With Andy Robertson out of position having taken the initial throw-in, and Van Dijk not offering a passing lane for his goalkeeper, Lacazette intercepted Alisson’s pass before squaring for Nelson to finish.

Arteta's team struggled to retain possession after they had gone ahead, and they dropped deeper and deeper in the hope of protecting their lead. Their wide attackers withdrew into midfield, leaving Lacazette – and later Pierre-Emerick Aubameyang – too isolated when battling for any clearances made from defence.

They also lacked any central threat during transitions. When they changed shape in the second half to move Aubameyang and Pépé into attack, their attacking two offered wide runs around Liverpool’s defence, but in doing so offered too little centrally. Liverpool’s central defenders were therefore rarely drawn out of position, and Arsenal’s counter-attacks swiftly failed. They regardless eventually secured a victory built entirely on clinical finishing and – more importantly – defensive solidity.

Liverpool were again organised by their manager Jürgen Klopp into their favoured 4-3-3 formation, and were confronted by opponents who defended with a 5-2-3 block. Arsenal sought to frustrate Liverpool by Alexandre Lacazette screening passes to Fabinho, operating at the base of their midfield, so Trent Alexander-Arnold and Andy Robertson were those afforded the greatest space.

Roberto Firmino's desire to withdraw from their attack contributed to them progressing in central territory, particularly when Alex Oxlade-Chamberlain and Georginio Wijnaldum adopted wider positions to move beyond Granit Xhaka and Lucas Torreira to create a passing lane to the Brazilian. When Firmino was put under increased pressure, they each moved even wider to receive possession and drive at Arsenal's wing-backs, and were often supported by Robertson and Alexander-Arnold.

With Mo Salah and Sadio Mané moving inside and between Arsenal’s central defenders, Liverpool applied increasing pressure and the latter soon scored from Robertson's cross after possession had been secured by a long clearance by goalkeeper Emiliano Martínez. Liverpool continued to threaten along the left; Firmino, Oxlade-Chamberlain and Wijnaldum drew Arsenal's central defenders out of position; direct switches between their full-backs – used more commonly against the Premier League's leading teams – enhanced that threat. Mané remained inside, ready to receive possession as the third man, when those switches were attempted.


Wijnaldum moving high, instead of wide, and beyond Cédric Soares's press continued to enhance that threat towards the left. Arsenal's deepening block also contributed to possession remaining in their defensive third.

Attempted wider combinations between Liverpool's midfielders weren't having the same success, so their full-backs began to advance and remain further fowards, their midfielders remained more central, and Salah and Mané began to operate as centre-forwards. Takumi Minamino was introduced to give Liverpool increased creativity in midfield, but Arsenal's three central defenders proved capable of defending the six-yard box and frustrating Liverpool's attackers through a lack of space.