Profile
When Ansu Fati broke a 95-year national record to become Spain’s youngest goalscorer at the age of 17 years and 311 days in September 2020 it provided the latest demonstration of why perhaps no player’s reputation had grown to the same extent over the previous 12 months. He was only 16 when he made history with Barcelona, when becoming the youngest player in La Liga history to register both a goal and an assist in the same game. In that 5-2 victory over Valencia, he needed just seven minutes to do so.

Only 110 seconds had passed when the forward scored from Frenkie de Jong’s low cross, with a right-footed finish. After a further five minutes he advanced into the penalty area before playing the pass from which De Jong then scored. Many fine players have progressed through Barça’s Masia in the modern era, but since Pep Guardiola’s departure in 2012 there have been fewer. That Ansu continues to make such progress means that hopes around him are particularly high.

Tactical analysis
Ansu’s ability to make diagonal dribbles encourage a variety of attacking combinations when he has advanced into the final third. When he moves into more central territory with possession he invites teammates to overlap him from the spaces he has just vacated, and also then has further options to advance that possession, via a pass or a combination.

If he opts against feeding a teammate or switching play, Ansu favours shooting with his stronger right foot, often after taking a further step infield and aiming across goal towards the far corner, having quickly moved the ball to create the necessary space to shoot. Instead of relying on flair there is an efficiency with which he carries possession, involving changes of speed – particularly from a static start.

For one so young and inexperienced there is also a tactical awareness involved when he releases the ball to teammates occupying central positions; he plays cutbacks and horizontal passes across the penalty area that are closer to guided balls than they are standard crosses (below). He also often moves on to his left, to unsettle defenders attempting to preempt him going onto his right foot, while attacking them one-on-one, slowing down then bursting away from pressure to either side of the defender, in a similar way to Eden Hazard.

For all of his natural talent, the speed of Ansu’s connecting passes needs to improve. The pass prior to the assist is particularly crucial given that defenders are so quickly drawn towards possession once it reaches the final third, something that can contribute to spaces being created for another attacker to shoot from. 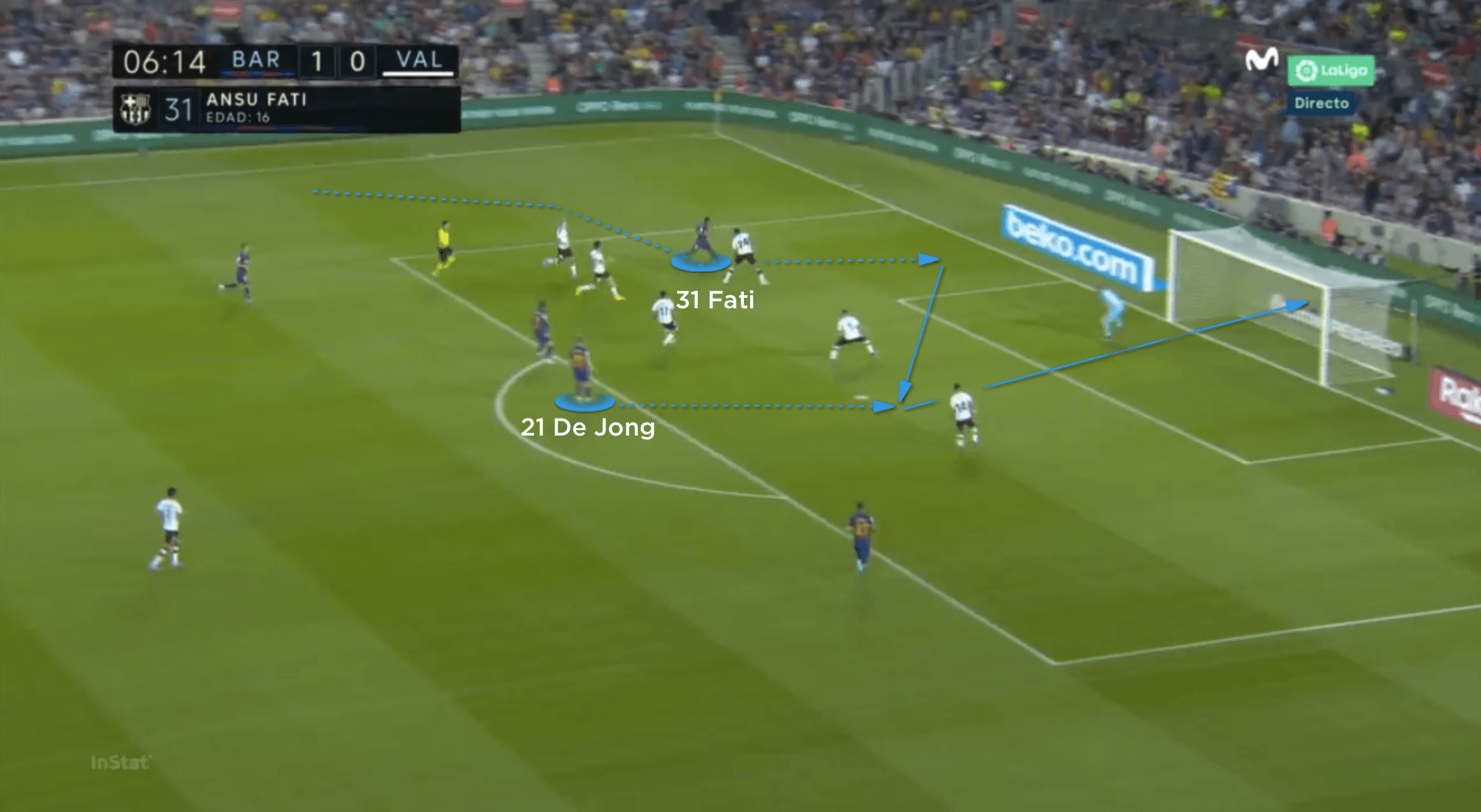 He possesses the ability to delay attacks through his changes of speed – thereby encouraging other attackers to advance – and there is an increasing emphasis on the detail of the supporting pass. The angle and timing of the release of his passes are impressive, but the speed of the delivery doesn’t yet consistently complement the movements of his teammates.

Role at Barcelona
Barça’s long-term preference for a 4-3-3 has often involved Ansu playing on the left of their front three, and combining with the overlapping Jordi Alba (below). Barça’s attacks tend to be more focused down their left, largely through combinations between Alba and Lionel Messi and, for a period, Neymar. Ansu’s influence has grown when he has been paired with the left-back; when Ansu advances, Alba delays his supporting runs so that he has space to burst into when he does join the attack. 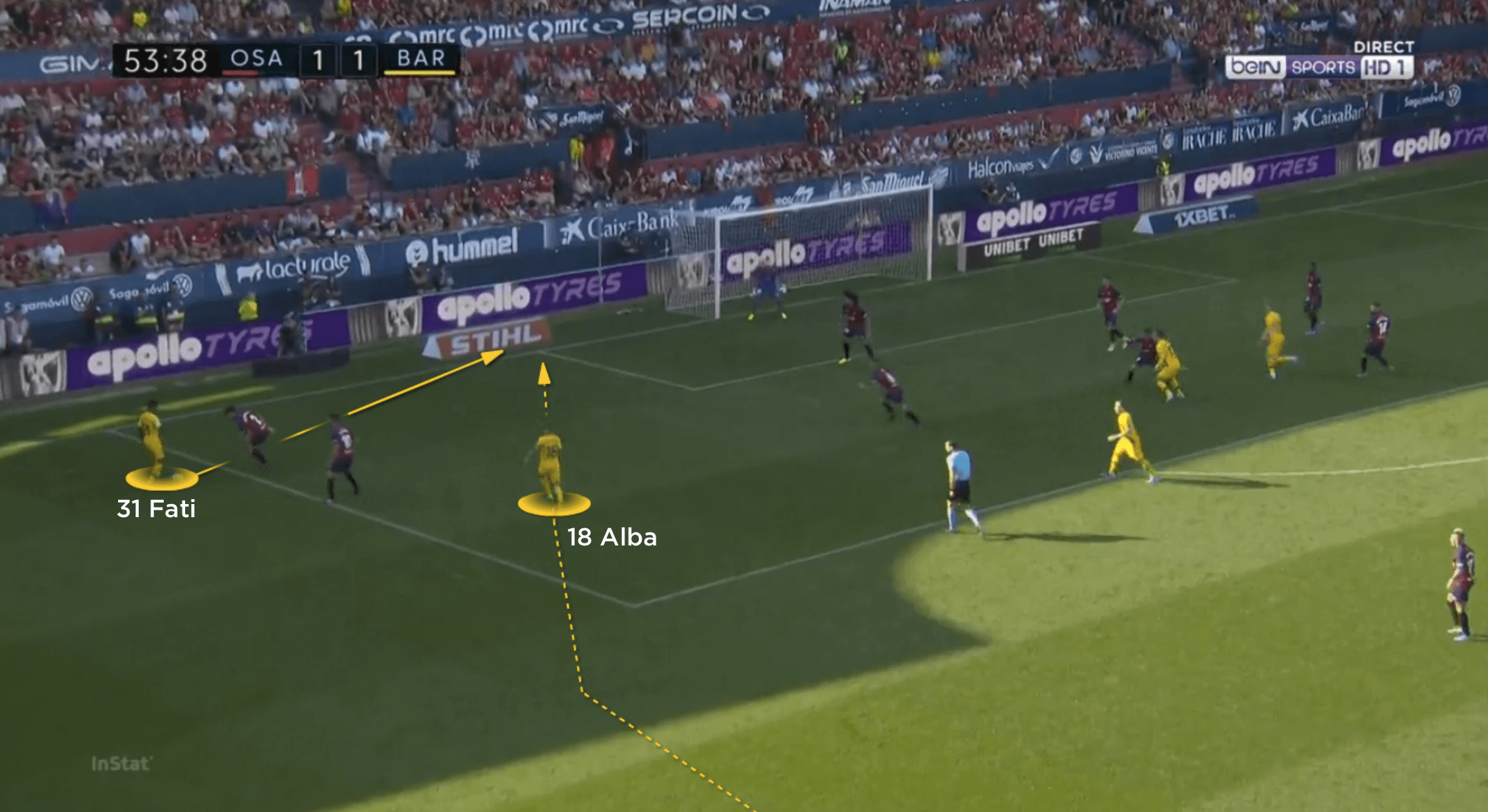 If Alba’s presence takes the attention of one defender away from Ansu, it also gives him a potential target when he is attempting to play a pass; should he release it to Ansu, Messi will often drift from the right to combine and create as the third attacker, from the left inside channel. With Luis Suárez often occupying the right-sided central defender, and their overall preference for attacking towards the left, there exists the foundations of a potent attack.

Should the right-footed Nélson Semedo start at left-back instead of Alba, he struggles to offer the same supporting, overlapping runs, reducing Ansu’s options. His positioning there, and his desire to support in central areas on his right foot, demands that Ansu adapts his position and movements towards a wide starting role, from where he is far less convincing. There is a willingness to attack around both sides of an opponent, but he remains more suited to doing so towards his right foot. While attacking down the line is more likely to succeed, he is considerably more reliant on support from teammates and considerably less successful. Even if, as expected, Barça eventually use him towards the right of their front three, if Ansu is to fulfil his potential this will need to improve.